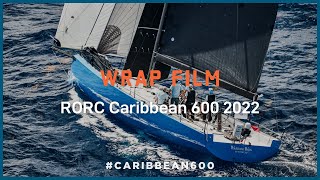 The 2022 RORC Caribbean 600 attracted 74 teams with 738 sailors from 32 different nations. The Caribbean classic is back with the most impressive fleet in the 14-year history of the race. Moderate trade winds faded to a lighter breeze during the five days of the race, but that did not stop Jason Carroll’s MOD70 Argo setting a new multihull race record in a thrilling finish with Giovanni Soldini’s Multi 70 Maserati. There was sizzling competition right through all the IRC Classes and the Class40 Division. ClubSwan 125 Skorpios, skippered by Fernando Echavarri, took Monohull Line Honours after a terrific battle with the VPLP/ Verdier 100 Comanche, skippered by Mitch Booth. Christopher Sheehan’s Pac52 Warrior Won was the overall winner, lifting the RORC Caribbean 600 Trophy for the best corrected time under IRC. “Tactically, the RORC Caribbean 600 rates as one of the hardest in the world. It is like a heavyweight boxing match; the lefts and the rights just keep coming at you and you wait for that knockout punch. At any moment you can park up, no lead is safe until the very end,” commented Warrior Won’s tactician Richard Clarke. Read the full wrap up via https://bit.ly/3pg9N7F #Caribbean600 #RORCracing 0:00 Intro 2:16 Start 4:20 Multihulls 7:25 IRC 1 9:00 IRC 2 10:19 Class40 12:35 IRC Super Zero 15:09 The Volvos 17:20 IRC Zero & Overall Winner, Warrior Won 21:50 Race Director Summary 22:36 Movie Montage
16038
139
7 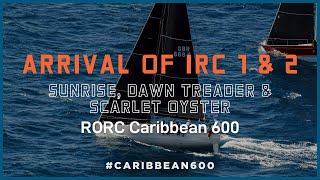 Close finishes have been a feature of this year’s RORC Caribbean 600 and that trait continued in IRC One with a rematch between two British JPK 1180s. Sunrise and Dawn Treader last met in the 2021 Rolex Fastnet Race and Sunrise won the world’s biggest offshore race overall. Dawn Treader’s Fastnet was a miserable experience, suffering a broken mast in first few miles of the iconic race. Fast-forward to the RORC Caribbean 600, Tom Kneen’s Sunrise (GBR) was pushed all the way by Ed Bell’s Dawn Treader (GBR). The two teams are very friendly off the water, but out on the 600-mile race track, the gloves were off for four days and nights of intense racing. Sunrise won the battle and IRC One, but only just, beating Dawn Treader into second place by under 12 minutes after IRC time correction. Third in IRC One was Jacques Pelletier’s Breton team racing the Milon 41 L’Ange de Milon (FRA). Ross Applebey’s victory in IRC Two was his eighth class win in the RORC Caribbean 600 and the seventh for Scarlet Oyster (GBR). The Oyster 48 finished the race just before dawn on Friday 25th February, taking class line honours and win after IRC time correction. The remainder of the podium for IRC Two is as yet undecided, but as of 12:38 AST on Friday 25th February, no other team in the class can better Scarlet Oyster’s corrected time. #Caribbean600 #RORCracing
1809
11
0 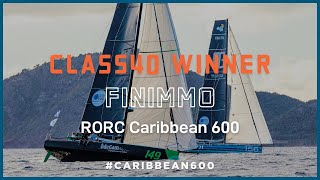 The winner of the nine-strong Class40 division was decided on the fourth day of the RORC Caribbean 600 with a dramatic finish between two teams. Charles-Louis Mourruau’s Guidi, which had led for most of the race, stalled as the breeze faded with the finish line beckoning. Finimmo took the lead in the last few miles to win by just 61 seconds after racing for well over three days and nights. The spirit in the Class40 division shone through with the Finimmo team going to greet Guidi into English Harbour, consoling their adversaries. The Owen Clarke designed Finimmo was sailed by a team of four co-skippers; Herve Thomas, Benoit de Froidmont, Gerald Veniard and four-time Vendée Globe sailor Kito de Pavant. Figarist Gerald Veniard, taking part in his second race, spoke on behalf of the team: “Our goal was to finish in the top three. We had a good start and were the first Class40 at Barbuda, but then Guidi came back and smashed us downwind. We got back at them at St Maarten but then they extended on the downwind leg to Guadeloupe. Our strategy for Guadeloupe did not work at all. After that we were 20 miles behind and we thought the race was lost. It was a big surprise to see Guidi was offshore and now had wind after Redonda. So, it was like the icing on the cake to take the lead after a match race to the finish.” #Caribbean600 #RORCracing #Class40
1717
11
2 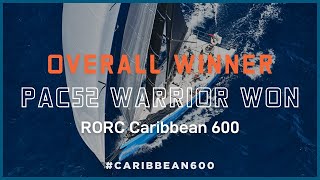 The overall winner of the 13th edition of the RORC Caribbean 600 is Christopher Sheehan’s Pac52 Warrior Won (USA). None of the teams still racing under IRC has any realistic chance of beating Warrior Won after time correction. Christopher Sheehan and his team will be presented with the RORC Caribbean 600 Trophy at the Prize Giving on Friday 25th February. Christopher Sheehan, owner & skipper of Warrior Won is from the Larchmont Yacht Club, USA. Sheehan’s Warrior Won was taking part in its first RORC Caribbean 600, having won the 2022 Transpac Race overall. “I feel so much joy right now. It is very humbling when I think about all of the competitors that have worked so hard in this race, I am overwhelmed. We have been preparing for this race for the last eight months and when I think of the great teams that have won this race, it is just extraordinary. The mantra of Warrior Won is humility and extreme confidence in what we are doing, which results in positive energy on board, hard work and collaboration. Every member of the Warrior Won team has put in an outstanding performance.” #Caribbean600 #RORCracing
7018
65
2 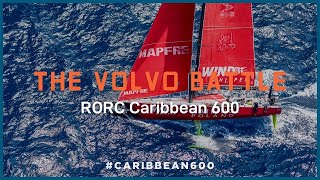 A multinational crew on the chartered VO65 Sailing Poland competed under the famous team banner of Groovederci Racing. The Volvo 65 Groovederci Racing - Sailing Poland, skippered by Deneen Demourkas, crossed the finish line of the RORC Caribbean 600 on Wednesday 23rd February at 14:21:31, just 20 minutes ahead of their rivals I Love Poland. "I've never put together a team at the last minute before and had it work out so well. Fabulous; really, all great guys, great sailors, obviously. And, a great group of people to be doing this race with for sure. They've all got your back." - Deneen Demourkas, Skipper of Groovederci Racing - Sailing Poland. #Caribbean600 #RORCracing
4887
46
3
Load more...