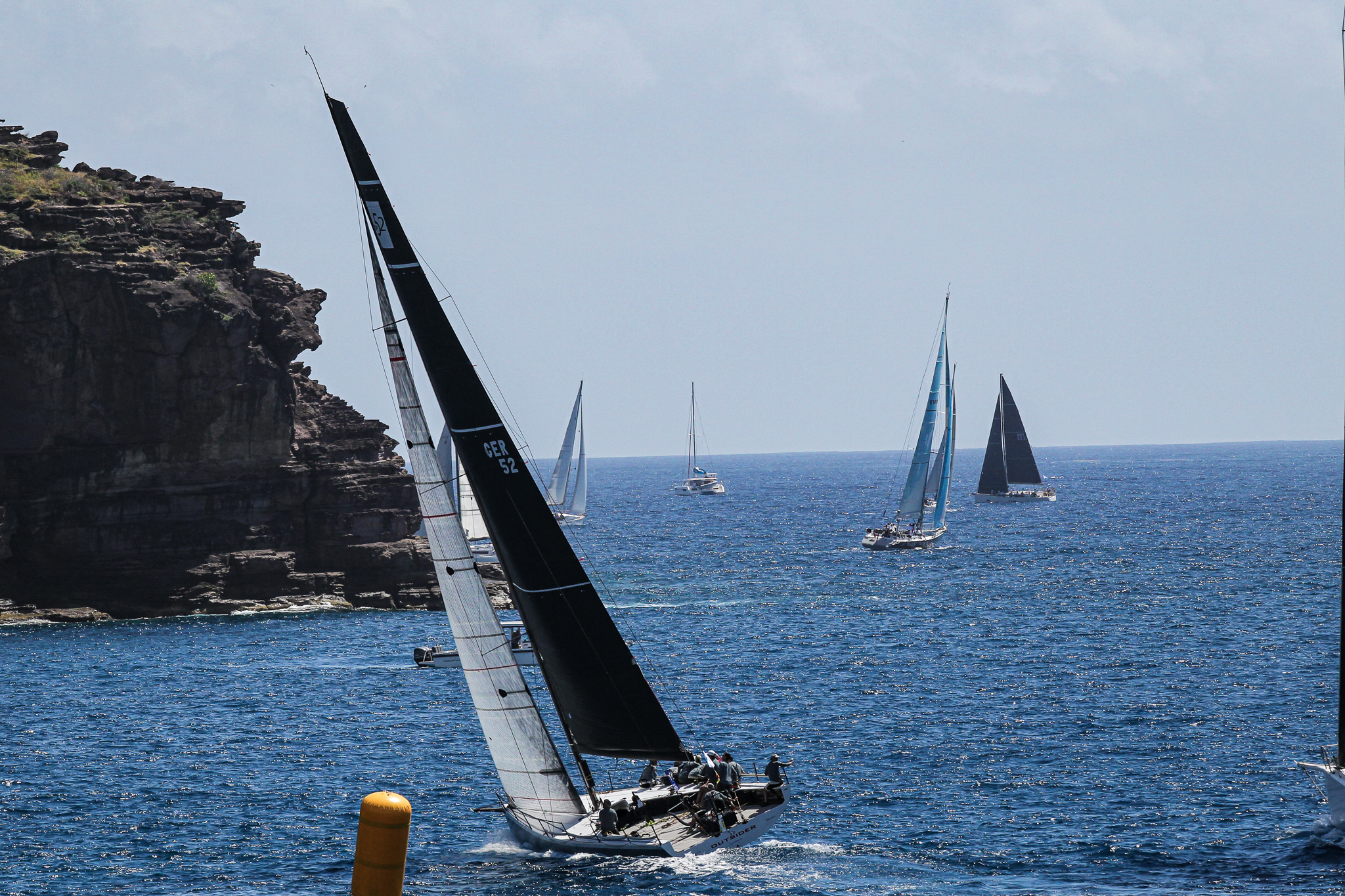 Seventy-three teams with 700 sailors from 37 different countries took part in the 12th edition of the RORC Caribbean 600. Disruption to the trade winds produced a tactical and strategic battle in predominantly light air. The traditional trade wind experience of blasting around the 600nm course was replaced with wind traps at most of the 11 Caribbean islands. Avoiding the windless lees and making use of the acceleration zones were the key to a winning performance. There were battles right through the fleet and sightings of breaching whales, dolphins and turtles which enhanced the sublime vistas.

Tilmar Hansen’s TP52 Outsider (GER) is the first German boat to win the RORC Caribbean 600 Trophy, having posted the best corrected time under IRC, and breaking a seven-year winning streak for American boats. Outsider finished the race on Thursday 27th February, which just happened to be Tilmar’s 70th birthday!

David & Peter Askew’s Volvo 70 Wizard (USA) took Monohull Line Honours for the second consecutive year. “In the early part of the race it was about just keeping the boat going the best we could,” commented Peter Askew. “Wizard is not the best light airs boat, that’s for sure. We had to dig ourselves out of a hole. We finally got around Outsider (TP52) at Monserrat and Prospector (Mini Maxi) at Guadeloupe. We got into really good breeze up to Barbuda, just blast reaching, doing 22-24 knots the whole way.”

“I gave up counting the number of times the lead changed - I didn’t have enough fingers,” commented Peter Cunningham. “It was the most fantastic race. Absolutely unbelievable. The PowerPlay team is fantastic - the organisation and the number of sail changes we had to make all the way through, especially considering the soul-destroying flat spots. You know you come into the hole first and then end up third or fourth - it could change so easily. We had some tough times but nobody worried. We had a bit of a laugh when we had a virtual drink every now and again, plus a chocolate mint when we did well. Argo really were fantastic - right to the end, the boats were so evenly matched.”

“We didn’t make it to the finish line in the last two long races, so we are very happy and it is even sweeter to win MOCRA,” commented Adrian Keller. “As the heaviest boat in the class we don’t like light air, but a special sail we call a J0 allows us to go pretty tight to the wind. As soon as we get into 15 knots and more, we are really fast, and it was tremendous fun. One of the deciding parts of this race was how long you were parked up. We did a good job at most of the islands, but like everyone else, we stopped in the lee of Guadeloupe. However, when you get around the corner and that trade wind hits you, it’s full on.”

“We enjoy the sailing and these boats, especially in this race when we have hours and hours of fast reaching, surfing away,” commented Giles Redpath. “The crew are all friends and there is a lot of camaraderie on board. There is an extremely nice atmosphere on board. We had some beautiful moments such as breaching whales near Barbuda. This is a very special race with stunning scenery and always boats to race, anywhere on the course – a lot of fun!”

“The team are very experienced and in Long Island Sound we have learnt a few tricks on how to keep going in light airs,” commented Peter McWhinnie. “The biggest gain during the race was in the lee of St. Kitts. We kept going and stretched out six miles on our class. If the wind had not dropped off on Thursday, we would have had a real chance of winning the race overall. The team is all Corinthian and we are really happy with our performance.”

The last boat to finish the race, Cabbyl Vane, arrived the morning after the Prize Giving. The 1974 Ohlson 35 has been beautifully restored and optimised for offshore sailing. Last year the Dutch brothers, Yoyo and Jan Gerssen, raced two-handed but retired, exhausted in the tough conditions. This year they were joined by Sam Frampton, and Gertjan Andel. A huge gathering at the Antigua Yacht Club cheered their arrival.

“This means so much to us,” smiled Yoyo Gerssen. “We were determined to finish the race and that is down to the crew and a great boat. Racing 600 miles in Cabbyl Vane is a long way, but she was solid and so were the team. It was never in doubt that we would finish and Jan made his flight back to Holland. It means so much to me and my brother, a big thanks to Sam and Gertjan, and of course the RORC for the 600 – it is a wonderful experience.”

The 13th edition of the RORC Caribbean 600 will start from Fort Charlotte, Nelson’s Dockyard on Monday 22 February 2021.