Phaedo 3 and Paradox fly into Antigua

The Multihull record for the RORC Caribbean 600 has not been broken since the inaugural race in 2009. For the last six editions the record set by John Burnie and Claude Thelier on ORMA 60 trimaran, Region Guadeloupe (40 hours 11 mins 5 secs) has remained unbeaten. However, this year there are two multihulls, both owned by RORC members, that have the potential to smash the record by hours. Lloyd Thornburg's MOD 70, Phaedo 3 and Peter Aschenbrenner’s Nigel Irens 63, Paradox, both crossed the Atlantic to take part in this year's race.

Phaedo 3 was a late entry for this year's race and blasted into Falmouth Harbour, Antigua just four days before the start. Owner Lloyd Thornburg is taking part in his third RORC Caribbean 600 and is relishing the prospect of racing the MOD 70 around the course at phenomenal speed. Phaedo 3's crew include Jules Verne record holder, Brian Thompson and double Vendee Globe winner, Michel Desjoyeaux, with Sam Goodchild and Pete Cummings.

“Brian Thompson and I have been working on getting a MOD 70 for two years and it only came to fruition in January,” commented Lloyd Thornburg. “Phaedo 3 sailed direct from France, across the Atlantic. She was originally Foncia, skippered by Michel Desjoyeaux and Michel will be racing with us for the RORC Caribbean 600. Brian Thompson put all the crew together and from what he has told me about Michel, he is an extraordinary sailor.

For me this race is just fantastic, once you have gone around this course fast, you just want to go faster and that is the real driving force behind the MOD70. As far as the record is concerned, the boat and the crew are capable of beating it but we will wait to see what the conditions are like for the race and we know we have to finish the course before we can start talking about record pace. Besides keeping our eye of the competition, we will be watching the clock for sure.” 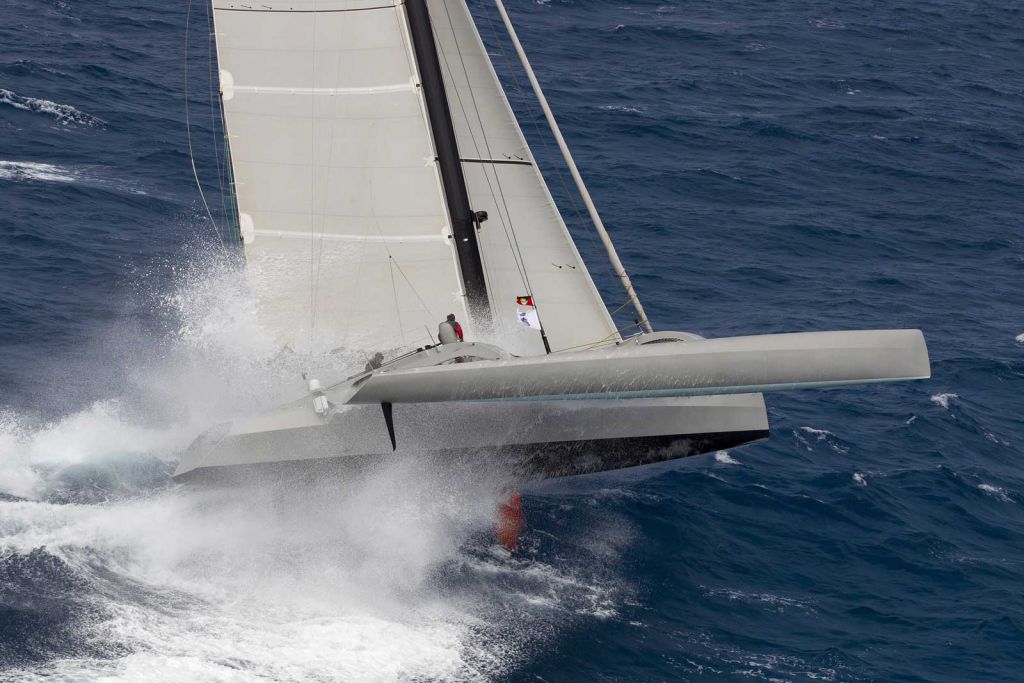 “The next Sailrocket is going to be an offshore boat so this is a great way to remind myself of the issues and compromises offshore,” commented Paul.  “Plus this race is in the Caribbean and I am based in the UK, so it is a great place to be in February! Paradox is a very strong, fast boat but it weighs a couple of tons more than say an ORMA 60 because, as the name Paradox suggests, it is a blend between a cruising and a racing boat.

The daggerboards are lifting foils, which are designed to reduce the drag on the boat, significantly reducing the friction in the water. There are two ways to make a boat go faster, you can add more power or you can reduce the drag. Foils lift the boat dynamically in much the same way as the wing of an aircraft, getting the balance right is the trick.

As far as competing with Phaedo 3, the MOD70 is in a class of her own Paradox really is exactly what her name suggests, a boat that has made compromises for cruising. However, the calibre of some of the monohulls is absolutely awesome and potentially we could be racing around with them. If we can give Rambler 88 a run for her money that would be fantastic; personally I don't want to sail around this great course on our own, it would be great to have some company.”