A Tough Day in Paradise 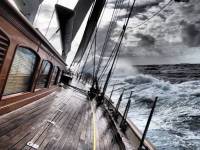 Just before dawn Peter Aschenbrenner's American 63ft Trimaran, Paradox, powered through the finish line to complete the 600-mile course in less than two days. Conditions have been fresh to frightening right from the start and there has been no let up for over 500 sailors battling through exciting yet tough conditions. Next to finish will be Mike Slade's British maxi, ICAP Leopard, to claim Monohull Line Honours, however ICAP Leopard experienced a slow passage to the south of Guadeloupe, preventing the team from getting near the course record.

Any notion that the RORC Caribbean 600 is a jolly around the Caribbean has been totally dispelled. Warm conditions and spectacular surroundings apart, racing 600 miles in big conditions is taking its toll. Eight yachts have now retired from the race leaving 44 yachts still racing. The majority will not finish for at least another 24 hours if not more.

Breaking news from the RORC Caribbean 600 race course is that the first finishers are expected in the early hours of tomorrow morning (Wednesday 20 Feb), with every possibility that at least one record will be broken and possibly two.

Peter Aschenbrenner's American trimaran, Paradox, has virtually rounded Guadeloupe and is close to laying Les Desirades, the most easterly point of the course. Paradox, with multihull legend Cam Lewis on board, is still on record pace and is expected to arrive back in Antigua in the early hours of tomorrow morning. Paradox need to cross the line before 03:11:05 on Wednesday morning, to beat Region Guadeloupe's 2009 record. Paradox needs to cover 190 miles in 12 hours, which is very achievable.

In the Multihull Class Lloyd Thornburg's Gunboat 66, Phaedo, took a big gamble this morning and rolled straight sixes. Leaving Montserrat to leeward meant that the team had to sail many more miles but the "Buffalo Girls" manoeuvre had Phaedo smelling of roses, nearly catching up with ICAP Leopard and cementing their position as leaders of the Multihull Class.

On the first night, there was virtually no let up in the phenomenal pace for the yachts competing in the RORC Caribbean 600. Warm Trade Winds gusting up to 28 knots was the norm. Downwind under spinnaker, the broad reach to the magical island of St.Kitts was spectacular as Andreas Hanakamp on board Class40, Vaquita, explained by satellite phone:

"Just amazing racing, all the crew were grinning from ear to ear as we blasted downwind with the sunset lighting up the spinnaker. It was so special, we decided to have a-la-carte dinner with each crewman choosing his favourite freeze dried dish, it was beef stroganoff for me. The racing is really close, Sensation did well at the North Sails mark, sailing higher but we got back at them after turning downwind. However, we have less righting moment than 40 Degrees, so I expect them to come back at us on the beat to St.Barths, we will just try and sail as fast as we can."

Andreas' forecast was spot-on, Peter Harding's Class40, 40 Degrees has taken the lead with Vaquita back in second place.

In the Multihull Class Lloyd Thornburg's Gunboat 66, Phaedo, threw the dice at about 2200 last night by taking a more northerly route than Peter Aschenbrenner's Paradox ahead of them. However, the move did not pay off with Paradox extending their lead. Paradox is now blast reaching south and has nearly made Montserrat. The volcanic island marks the halfway distance (in miles) for the course. Paradox completed 300 miles in 20 hours, which is on course for the multihull record set by ORMA 60 Region Guadeloupe in 2009 and never beaten.

At 1700 local time, Peter Aschenbrenner's American trimaran, Paradox, and Mike Slade's British Maxi, ICAP Leopard, were both averaging a ballistic 18 knots covering the first 100 miles of the course in an astonishing seven and a half hours.

Paradox is eating up the miles, after literally getting airborne in the upwind leg after the start. Paradox pulled the trigger on the windward side of Antigua, flashing through the Atlantic swell like a scalded cat. By 1700 local time, Paradox had passed Nevis and blasting to leeward of St.Kitts, still achieving over 20 knots of boat speed. Lloyd Thornburg's Gunboat 66 Phaedo, nearly twice the weight of Paradox, was being pushed hard by Britain's Brian Thompson on the helm of Phaedo. Paradox was only 12 miles astern giving the Lamborghini Orange Gunboat the class lead on corrected. Sadly Austin Hearst's Gunboat 66, Slim, has been forced to retire after rudder damage.

A flash of smoke, high above the 'Pillars of Hercules' announced the start of the 5th edition of the RORC Caribbean 600. Before the start 25 knots of trade winds, gusting close to 30, provided feisty conditions. 53 yachts blasted into action, crashing to windward through the surf in the starting area. The international fleet, with crews from 31 nations, set off for the 600-mile race threading through 11 stunning Caribbean islands and the forecast strong winds promises a wild and memorable ride.

"This is going to be a fast and fairly tough race," commented RORC CEO, Eddie Warden Owen, prior to the start. "All the teams are aware of the forecast and they know it is going to be breezy and how they handle those conditions will have a big impact on their performance. They will be excited but also apprehensive about the conditions. However, watching the start I have to say it was stunning, sunshine, beautiful warm water, they are all going to have a fantastic race."

The 5th RORC Caribbean 600 is underway

The 5th edition of the RORC Caribbean 600 Race is now underway. If you are not lucky enough to be racing around the Caribbean there are several options to feel a bit closer to the crew on board the boats:

Competing Boats in the 2013 RORC Caribbean 600 Race are equipped with tracking beacons by Yellowbrick.

You should also check the menu above for links to the latest news, blogs from the boats, photos and videos. We will be updating the minisite frequently - stay tuned.

Other options to stay up-to-date are connecting to the RORC on Facebook or following @OffshoreOne on Twitter.

Following a full to capacity Skipper's Briefing, the official welcome party to open the 5th edition of the RORC Caribbean 600 was held at Antigua Yacht Club. Crews from around 30 nations arrived to the sound of a traditional steel band and enjoyed a warm Antiguan welcome.

Mike Greville, Commodore of the RORC, will be racing the CM60, Venomous, and he welcomed competitors from the 53 boats taking part: "We could not do this without the help of the volunteers and Antigua Yacht Club, North Sails Caribbean who lay the only race mark in the course and A.B.S.A.R for the safety of competitors. We are also delighted to have with us representatives of the Antigua Government, The Hon. Eleston Adams, Minister for Culture, Gerry Daniel, Yachting Consultant representing Antigua Tourism and Claude Anthony, Chairman of National Parks. This race continues to grow year on year and has become one of the classic 600 mile ocean races. Let me wish everyone a safe and fast passage in this year's race."

The RORC Caribbean 600 starts tomorrow - Monday 18th February. During the race, there will be daily news stories, images and video updates from the fleet. All of the yachts will be fitted with Yellowbrick trackers and competitors are encouraged to send blogs and images from the yachts which will also appear on the website. 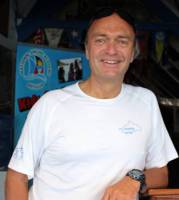 The RORC Caribbean 600 is a truly international yacht race, sailors from 31 countries have gathered in Antigua for the spectacular event. Of those nations, six have sailing grounds in the Baltic Sea, which has a current sea temperature barely above freezing. Sailors from Denmark, Germany, Norway, Poland, Russia and Sweden have come to Antigua to escape the icy conditions in Northern Europe. Amongst them is double Olympic Gold Medallist, Jesper Bank.

Racing on Class40, Vaquita, Jesper Bank is one of Denmark's most outstanding athletes, winning two Olympic Gold medals and a Bronze. Besides his Olympic achievements, Jesper has also been at the helm for Swedish and German teams in the America's Cup and he is a former winner of the coveted ISAF World Match Racing Championship. However offshore racing is a new concept to the Dane.