Sailing in the shadows - looking for the lifts

Overnight the RORC Caribbean 600 fleet has spread out across the course, most boats now lying between Saba and Tintimare north of St Martin. Rambler has set a blistering pace and is fast approaching Basseterre in Guadeloupe - the crew must be looking towards setting a new monohull course record. The trade winds remained very constant throughout the night which saw the fleet working their way past the islands of Nevis, St Kitts, Eustatia and Saba. Aegir reported fluky air on this leg and several yachts including Ocean Seven and Selene gybed away from the land in search of more consistent air. The North part of St Kitts is broad and high - wind shadow can affect the whole area on the rhumbline between Nevis and Saba. Clearly some yachts gained or lost out here depending on the wind phase. Being closer or further out can profit either way but being further offshore usually pays.

The beat up to St Bart's from Saba, never a comfortable one, is where part of the fleet are now engaged and it is interesting to see the differing options boats are taking. British Soldier has chosen to close the St Martin coast in one large tack, presumably looking for shallow water with less current and calmer seas. Heavier yachts beating hard close to the rhumbline look to be doing better with Lila, EHO1 and Hydrocarbon at the head of a series of Class 40's including Fitz and Ocean Warrior. Behind them the two 40.7s including Coyote will be having a bumpy and wet bash upwind in the increased swell - there is little option for them other than to tough it out staying close to the rhumbline as they slowly make their way up towards St Bart's. Boats already around St Bart's the first time are enjoying a short period of flatter water with down wind sailing - Concise has set an excellent benchmark leading the Class 40's ahead of Venomous (Whitbread 60) and just behind Selene (Swan 80).

By mid-morning on day two, the RORC Caribbean 600 was very much living up to its billing as a high-speed thrilling race around the stunning Caribbean. The majority of the fleet is now heading for the top part of the course and should be around St.Maarten during the day. It has been an action packed start to the race.

George David's Maxi, Rambler 100, is setting an amazing pace and is only two hours from reaching the bottom west corner of Guadeloupe, 270 miles from the finish. The canting keel speed machine is expected to cross the finish line before day light tomorrow and is well on course to beat the monohull course record of 44hr 5m 14sec, set by Mike Slade's Maxi, ICAP Leopard, in 2009.

ICAP Leopard is 42 miles behind Rambler 100, screeching along at over 20 knots, on the long sleigh ride to the bottom of the course. Rambler 100 is the hot favourite to take line honours and is currently winning the race on corrected time but the outcome is by no means a forgone conclusion.

Phaedo blasting through the Caribbean Surf

Just after midnight GMT, George David's Rambler was approaching Saba; with Mike Slade's ICAP Leopard 18 miles astern. Rambler 100 was recorded at speeds of over 20 knots for much of the race and are setting a record breaking pace with 450 miles to go. They are also leading the fleet on handicap.

In IRC One, Piet Vroon's Ker 46, Tonnerre de Breskens, is the clear leader on handicap and is fifteen miles ahead of Philippe Falle's Beneteau 50, Hydrocarbon Logic. Andy Middleton's First 47.7, EH01, is third on handicap.

There is an intense battle in IRC Two with the entire class within just five miles of each other on the water. The Army Associations, A 40, British Soldier, leads on handicap from Christian Reynolds, Swan 51, Northern Child, with Peter Hopps First 40.7, Coyote, in third place, after corrected time.

John Burnie commented: "The interesting thing about the leg from the North Sails mark off Barbuda to Nevis is that this year it was dead downwind. This meant that there would have been some big heavy air gybing, which will have tested the fleet's boat handling skills, as well as their tactical awareness."

The RORC Caribbean 600 race has delivered solid NE winds of 18-22 kts as predicted and all classes started cleanly in a freshening breeze. The line favoured a port tack and many yachts opted to start on that tack - in the largest group second start Ambersail showed a clean pair of heels on port. In fact only two or three boats favoured a starboard tack in the first three starts and Windrose looked balanced and powerful with both main and foresail reefed in her conventional approach. As the start sequences progressed a rainsquall passed through the fleet causing yachts to reef in anticipation. A slight lull immediately after the squall saw the multihulls shaking the reefs out at their one-minute signal during the fourth and last start sequence.

As if by magic, the Trade Winds blew into the starting area off English Harbour Antigua, after several days of light winds. With 22 knots or more in the gusts. The strong winds launched the RORC Caribbean 600 fleet into action for the start of what is probably the world's most exciting 600- mile offshore race.

First off were the smaller boats, but powerful yachts by any normal standard. Piet Vroon's electric blue Ker 46, Tonnerre de Breskens, seared through the line on port like a guided missile. The Army Association's A 40, British Soldier, sprang into action, stealing a march on the competition in IRC Two. Whilst, Tony Lawson's Class 40, Concise, nailed the middle of the line to lead their class.

Ten minutes later, the line off Fort Charlotte was festooned with canvas. Andrew McIrvine's 155ft Schooner, Windrose of Amsterdam, came in on port at the pin end with amazing power, Peter Harrison's Farr 114, Sojana, opted for a middle of the line start and engaged Brian Benjamin's Carbon Ocean 82, Aegir, who were right in under the Pillars of Hercules. To be honest, the hair was standing up on the back of my neck, as Sojana tacked into Windrose's path but thankfully there was no issue. 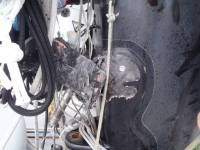 It was a beautiful day on the water off Antigua today, but not for the Genuine Risk crew. While warming up upwind under reefed main and #3 jib we came through one of the classic Caribbean swells and heard a crack from the vang gooseneck. Upon inspection discovered some hairline cracks, and did a lashing repair. This held for us into our starting sequence, but while coming up the upper gooseneck fitting exploded, shearing the gooseneck pin as well. So a disappointed crew of young Swedish and American sailors (and us old guys as well) headed back to the dock with preliminary repair plans underway, and ready to get the rig fixed before St. Maarten. One of those tough days that we have all had on the water, and all the crew would much rather be out in what's shaping up as a great race, but the gang is hitting the ground running on the dock to get her sorted.
Tweet Pin it

Amendment No.1 to the Sailing Instructions

Amendent No.1 to the Sailing Instructions has been issued.