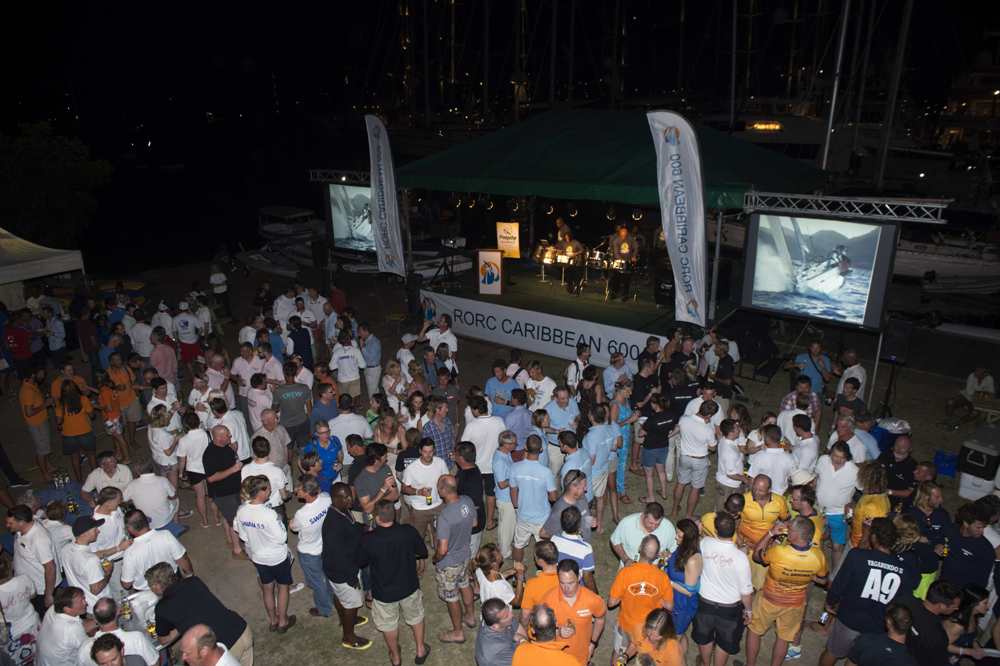 Following a filled to capacity Skippers' Briefing, the official welcome party to open the 7th edition of the RORC Caribbean 600 was held at Antigua Yacht Club. Over a thousand revellers arrived to the sound of a traditional steel band and enjoyed a warm Antiguan welcome. Eddie Warden Owen, Chief Executive of the Royal Ocean Racing Club welcomed the crew to the party and introduced Andrew McIrvine, Admiral of the RORC and skipper of Southern Wind 94, Windfall.

“1000 visitors from overseas, 68 Boats, crew from 40 different countries - one Amazing Race,” commented Andrew McIrvine.  “The RORC Caribbean 600 could not be what it is without the help of the volunteers and the continued support of the Antigua Yacht Club and the Government of Antigua and Barbuda. This race continues to grow year on year and has become one of the classic 600 mile ocean races. Let me wish everyone a safe and fast passage in this year's race.”

Click here for a gallery of images of the RORC Caribbean 600 Welcome Party. 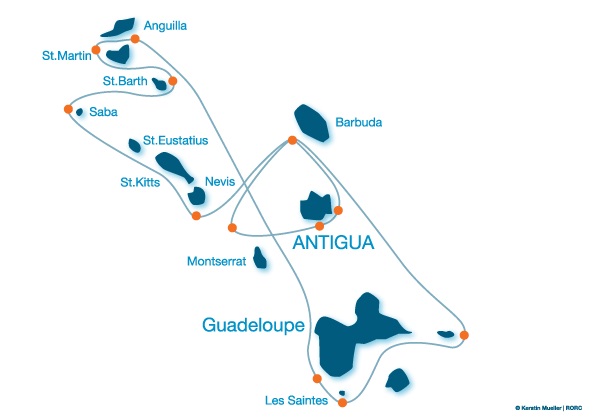 Classic trade winds are predicted at the start for the 68 yachts entered for the 7th edition of the RORC Caribbean 600. 15-20 knots of easterly winds, with two metre waves, will provide some exhilarating racing for the spectacular fleet. Punching through the surf, the adrenalin levels will be high as the yachts drive to windward on the south coast of Antigua.

On the windward side of Antigua, the yachts should be cracking sheets at Green Island for an ocean-blast to Barbuda. By the second day, the wind may veer slightly to the south and decrease slightly but by the third day, the gradient wind should begin to strengthen with an increasing chance of squall activity adding to the mix. By the fourth and fifth day, there is potential for the wind to back to the north, increasing to 20 knots or more with a building sea state. One of the principle attractions of the RORC Caribbean 600 is exciting sailing and this fleet will get exactly what they came for.

The talk on the dock is all about the weather and how that will affect the performance of every team in the RORC Caribbean 600. Here are a few answers to the question – ‘When do you think you will finish?’ 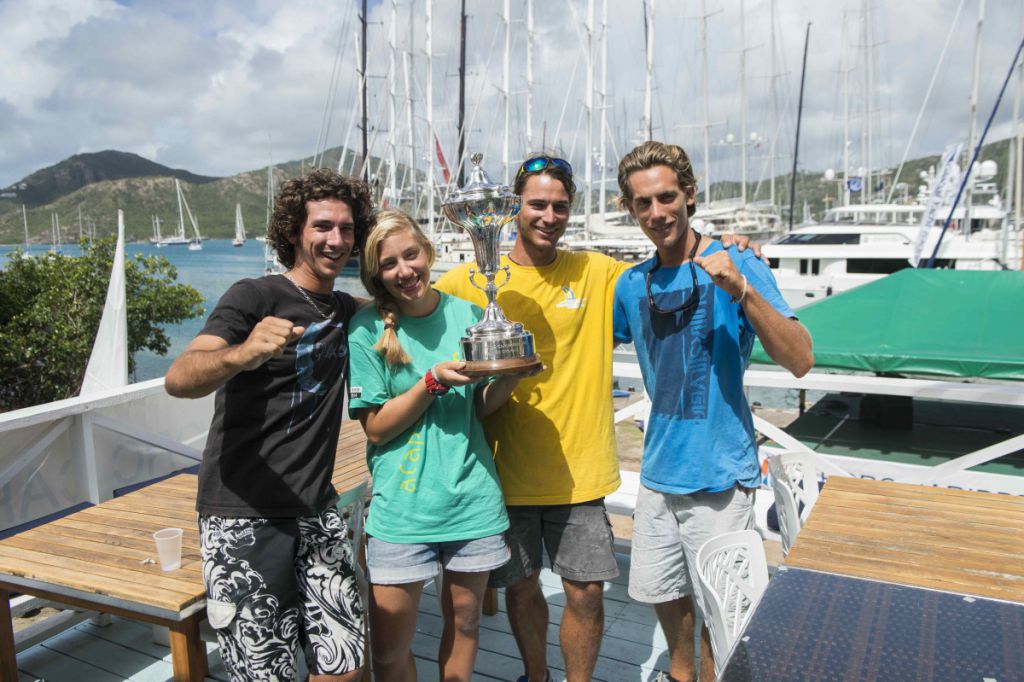 Dockside at the Antigua Yacht Club the pontoons are buzzing. The who's who of yachting has gathered for the 7th edition of the RORC Caribbean 600, including winners of the America's Cup, Volvo Ocean Race, Vendée Globe and Jules Verne Trophy. However this elite group of sailors only make up a small proportion of the 700-plus avid sailors taking part in the race. Eight young sailors from Guadeloupe will be racing in Figaro IIs. The rookies of the CSA Class would love to get their hands on the RORC Caribbean 600 Trophy and for one brief moment, they did, just for the cameras. Among those racing for Guadeloupe Grand Large across the four Figaro IIs will be Alienor Fleury, Simon Lefort, Leo Bottiglia, Danial Sentance, Andy Anicet, Tom Saliot, Bernard Joan and Daryl Garcon.

“We can dare to dream,” commented Alienor Fleury. “We are young, ambitious and full of passion for this race. When we heard that Michel Desjoyeaux was racing, it was just a fantastic feeling. We hope to meet with him at some stage and ask him about his sailing. For young sailors from Guadeloupe, meeting one of our heroes is like winning the race. For the RORC Caribbean 600, we will be racing each other in the CSA Class and we hope to have battles with other yachts on the course as well. The RORC Caribbean is the highlight of our season and a great opportunity to show that Guadeloupe has talent.”

Racing on Peter Schofield’s British HOD 35, Zarafa, will be a group of five young servicemen from the King’s Royal Hussars and Queen’s Royal Lancers. While Captains Charles Gray and Henry Foster competed on the army entry to the RORC Caribbean 600 in 2014, their soldiers have not sailed before, let alone raced 600nm. The learning curve will be steep but soldiers will be encouraged by an experienced skipper in Lymington based Major Peter Schofield, an ex-Royal Hussar and long-term supporter of army sailing.

'The qualities demanded by the army of listening, learning and executing orders translate well onboard and the young crew should be quick to learn the ropes. They can take heart from Zarafa’s performance at the Valentine’s Regatta in Jolly Harbour, raced by a similarly inexperienced crew drawn from the King’s Royal Hussars, who went on to win the regatta', commented Peter Schofield.

Phaedo 3 and Paradox fly into Antigua

The Multihull record for the RORC Caribbean 600 has not been broken since the inaugural race in 2009. For the last six editions the record set by John Burnie and Claude Thelier on ORMA 60 trimaran, Region Guadeloupe (40 hours 11 mins 5 secs) has remained unbeaten. However, this year there are two multihulls, both owned by RORC members, that have the potential to smash the record by hours. Lloyd Thornburg's MOD 70, Phaedo 3 and Peter Aschenbrenner’s Nigel Irens 63, Paradox, both crossed the Atlantic to take part in this year's race.

Phaedo 3 was a late entry for this year's race and blasted into Falmouth Harbour, Antigua just four days before the start. Owner Lloyd Thornburg is taking part in his third RORC Caribbean 600 and is relishing the prospect of racing the MOD 70 around the course at phenomenal speed. Phaedo 3's crew include Jules Verne record holder, Brian Thompson and double Vendee Globe winner, Michel Desjoyeaux, with Sam Goodchild and Pete Cummings.

The Race Team from the Royal Ocean Racing Club, based at Antigua Yacht Club, is busy preparing for the start of 7th edition of the RORC Caribbean 600. Since 2009, the only offshore race in the Caribbean has grown in popularity and this year another amazing fleet of yachts from around the world have come together for the spectacular rendezvous.

Fort Charlotte, Antigua will be the starting and finishing point for this sensational 600 mile non-stop yacht race around 11 Caribbean Islands.

THE START:
A myriad of 64 yachts, representing 14 different nations from Russia to Spain; USA to Lithuania, and joined by competitors from closer to home - Antigua and young Figaro sailors from the Guadeloupe Sailing Academy - will take the start on Monday 23rd February. The First Warning Signal is at 1050, but yachts will leave the dock much earlier to make their way to the start area.

Spectators are in for a treat. The seventh edition of the race will showcase an astounding fleet of yachts: record breaking high performance racers, magnificent schooners, elegant classics and fast production yachts. World-class sailors will be taking part, rubbing shoulders with royalty, captains of industry and passionate Corinthian amateurs.

Due to the size of the yachts and the sheer number competing, considerable sea room is needed to manoeuvre and a team of highly experienced volunteers will act as on-the-water marshals maintaining an Exclusion Zone to keep spectator boats at a safe distance from the yachts racing. 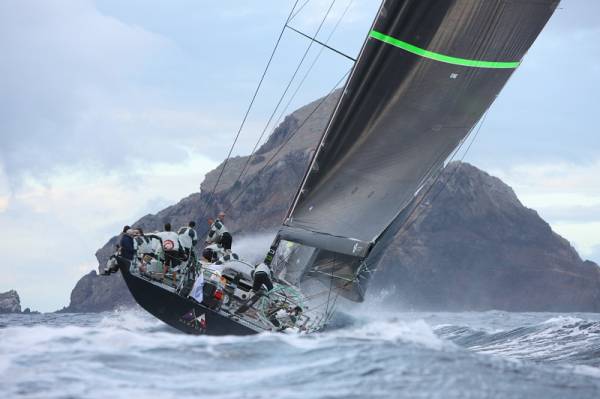 An amazing fleet of yachts from around the globe have come together for a spectacular Caribbean rendezvous. Fort Charlotte, Antigua will be the starting and finishing point for a sensational 600-mile yacht race around 11 Caribbean islands. Since 2009, the RORC Caribbean 600 has been growing in popularity and the seventh edition boasts an astounding fleet of yachts: record breaking high performance racers, magnificent schooners, elegant classics and fast production yachts. World class sailors will be taking part, rubbing shoulders with royalty, captains of industry and passionate Corinthian amateurs.

The course meanders through the stunning central Caribbean affording amazing scenery, but the RORC Caribbean 600 is not just a joyride. Competitors can expect little sleep as the myriad of corners create many manoeuvres. The racing is electric but the high speed action in tropical heat can be exhausting. At the finish, the welcome party for the crews has become legendary. Every boat is cheered in, regardless of the hour, for a cold beer and a warm welcome.

The monohull course record for the RORC Caribbean 600 (40 hours 20 mins 02 secs) was set by George David's Rambler 100 in 2011. The quality and depth of the fleet in this year's race means that the quest for line honours will be the most dramatic in years.

The overall winner is decided by the RORC IRC rating system and the calibre of the fleet is such that this year's winner is almost impossible to predict. Teamwork, tactics, and a share of good luck will decide the winner. Over the past six editions, only one 100-footer has won the race overall: Rambler 100. High performance yachts ranging from 50-72 feet have won the RORC Caribbean 600 Trophy on four occasions.

This year three projects, new to the race, will fit into that category: Bryon Ehrhart from Chicago, Illinois, will be racing Reichel Pugh 63, Lucky. Piet Vroon's newly acquired Ker 51, Tonnerre 4, from Breskens, Netherlands and British TP52 Sorcha, sailed by Peter Harrison, make up a trio of yachts that will be amongst the favourites for overall victory under the IRC rating rule.

The seventh edition of the RORC Caribbean 600 has entries from over 14 different nations and crew from many more. Throughout the fleet there is a myriad of class champions from famous yacht races around the world. 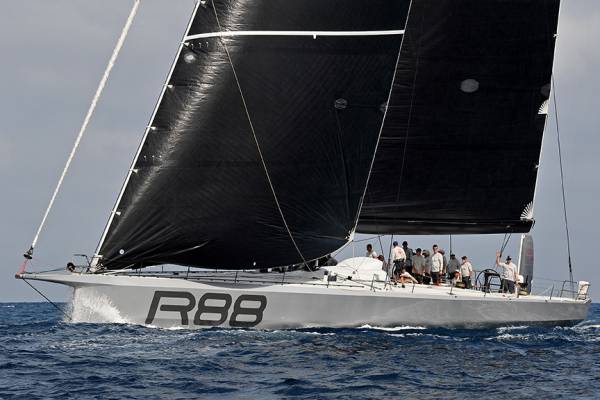 The 7th edition of the RORC Caribbean 600 is looking like a real cracker and proving irresistible to a variety of yacht racing teams from all over the world. An international fleet of over 50 yachts has now entered the offshore blast around the Caribbean, indicating that last year's record entry of 60 yachts may be bettered. Yachts flying the flags of 13 different countries will be competing in this year's race: Antigua, Australia, Belgium, Canada, France, Germany, Great Britain, Italy, Lithuania, The Netherlands, Russia, Spain, and the United States of America.

The Caribbean is, without doubt, one of yacht racing's most exhilarating playgrounds with the warm trade winds and Caribbean swell providing superb sailing conditions. The RORC Caribbean 600 course, starting and finishing in Antigua, is designed to provide a challenging, high speed racetrack and its popularity has grown, year on year, since the first event in 2009.

George David's Rambler 100 set the monohull course record in 2011, scorching around the track in 40 hours, 20 minutes and 2 seconds but this year's line-up is likely to be the most competitive for line honours so far. George David's brand new 88 ft Rambler will make its 600 debut with an all-star crew containing many of Rambler's old guard plus some new, world class, sailors including multiple America's Cup winner, Brad Butterworth and Volvo Ocean Race winners, Stu Bannatyne and Brad Jackson. Also in contention for line honours is Australian yachting legend Syd Fischer racing Ragamuffin 100, which is being shipped to Antigua from Australia, and Mike Slade's British 100ft Maxi Leopard, which took monohull line honours in the first edition of the race, makes a welcome return, and two Volvo 70s will also be vying to be the first yacht to complete the course, Giovani Soldini's Italian Maserati and Andrew Budgen and Fred Schwyn's British Monster Project.

Rambler's Project Manager, Mick Harvey, was full of excitement about the race: "George David has always been a strong supporter of this race because it is such a fantastic course with great conditions, but also because George David, like me and other crew, are members of the RORC and we just love to take part in this race. This will also be the first race of the Atlantic Ocean Racing Series, which is our priority for our first season. The boat is going well. As always there are a few adjustments, but all things considered, we are very happy with the new Rambler and looking forward to Antigua. This year there is a lot of good competition for us but we will concentrate on our own game, as that is all we can influence until the race start."