Watching the race tracker today has been a test of nerves. Scarlet has

continued to make great progress South towards the Island of Guadeloupe,

deciding which route to take... should they go inshore or offshore. The

decision was made late morning and seemed initially to have paid dividends.

Heading a little further offshore, Ross, Tim and the team have been banking

on there been more wind out there, and less chance of sitting in a wind hole

mid-afternoon, and then staying there as the wind drops off as night

This tactic has seen them pull ahead of the First 40 Smile and Wave, who

they have been having a private battle with since Saba. Smile and Wave

decided to take the inshore path, and have now headed further offshore

having seen their boat speed drop to just 2 knots. Scarlet has pulled out a

4.5 mile lead from then in the last few hours. However, Scarlet's speed has

now dropped as they are in the windless area, but not as much as the yachts

directly ahead of her, Clem and Lilla. They have been wallowing around all

Scarlet is still moving, and is still 3rd in IRC Overall behind Ran and

Rambler which is just so great! If they can keep moving and then catch the

done exceptionally well. So, as you can see, it is a little bit like a game

of chess. Which way should they go, and where is everyone else! Although

Scarlet does have quite sophisticated communication equipment onboard,

You can't monitor weather, boat position and speed all the time, as you have

to get out there and sail the yacht. They will be able to see where the

making earlier today. The ongoing forecast is for increasing wind, which

will suit Scarlet very well. If the yachts taking positions 1 and 2 in IRC

Overall finish ahead of her (which they should), then having a better wind

Onboard Scarlet we have a complete mixture of experience, age, gender and

nationalities. and we believe we have the oldest crew man in the fleet with

Brian Phillips at the tender age of 72! Brian is a stalwart of Sailing

have participated in since 2005 - go Brian! We know his family is very proud

of his achievements as we are, and we know when a team has had a good race

by the width of Brian's smile through the finish line. Brian is a demon

helm, and one of our best secret weapons....so long may he continue racing

E This email address is being protected from spambots. You need JavaScript enabled to view it.

approaching Northern end of Montserrat. Sun has disappeared in numerous

well. Conditions are fantastic, but he says that it is too hot to sleep, so

they are all very tired. However, as I was listening to him talking, I am

sure I could hear the distinct noise of someone snoring in the background,

so at least someone is managing get forty winks!

As I left the tracker and headed off to bed late last night, Scarlet was in

a tussle with Class1 yacht Smile and Wave, the First 40. Scarlet have

managed to pull out a mile lead on them now which is great, as this has

pushed them up the rankings from 6th to 3rd overall, which is brilliant!

Ahead on them on handicap is RAN and Clem.

towards the island of Guadeloupe. In the last 2 editions of the race, this

has been one of the trickier parts of the course, and there seems to be a

wind shadow on the far south western corner of the island, so tacticians

speed but ultimately sail further, or keep inshore, accept that speed will

drop as the wind does, but sail a more direct course. The wind seems at the

offshore option. Most yachts to date have gone between 4 and 8 miles

offshore to keep the breeze, so it will be interesting to see what tactics

the rest of the fleet decide to use. The weather forecast is saying that

there is more breeze to come during today which will favour Scarlet; she

loves the wind, and excels in anything over 20 knots so fingers crossed!

The leading yacht on the water is Hetairos, the new 38 metre all mahogany

super-yacht, launched in July 2011, which has nearly back at Antigua, ready

Middle of the nightand despite the few stars we can see through theclouds, it is pitch dark and the only light is reallythe glow from the land. We have now passed GrandeTerre from the Guadeloupe island. And we are sailingaround 9 to 10 knots up wind towards La Desirade.Earlier on we passed, on starboard, the island calledMarie Galante. We now have sailed 400 miles and oncewe round La Desirade, we will be heading towardsAntigua and the finish.
We have found out that the2 other boats on the water ahead of us are quite closeto us. In another words we caught up with them! Let'skeep up and not let them go again. It has been wet,and more wet, bumpy, lumpy, and real rock and roll! Itseems we were not to have just a nice sunny or drysailing the entire race!

Sunset in the Caribbean sea

Last minutes of the sun before it goes just after6pm. Reaching towards Guadeloupe, takes quite someconcentration and force to keep her going at the pacewe are sailing right now. We are going nearly as fastas the wind! In the distance we can see the profile ofMontserrat island and coming close to us the bigshadow of Guadeloupe. We can also see clouds, many!Now will they turn out to be our friends if we stay attheir edge to catch the wind and not need to go underand stop because of the rain? Or will they clear bythe time we get to them? ... We will also have to lookout for fishing pots in the water. Their marking isvery discreet it is easy (or easier for sure) to seethem in the light but at night it is what is called"pot-luck" ! Go team Rán! 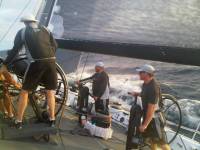 The navigator at his station

Every now and again our navigator will come down tocheck on his main screen which he fixes on thewindward side - always keeping the weight on thewindward side! When we change direction, he takes thescreen to the other side which has become the windwardside. On the screen he has the information of thecourse, where we should and should not go, what windwe should expect to find on the way, what the weatherwill be, how much distance to the next mark etc. Hethen communicates regularly with the team on deck,principally with the tactician but also with thehelmsman. When he is not below, he is on the rail witheveryone else and has a portable little tablet. Hewould of course always get involved in the manoeuvreson deck, changing the sails, grinding to trim the mainor the sails. He has a unique role on-board and hiswork is demanding just before the race and during therace to best interpret the data he has collated tohelp the team race in an optimised way. 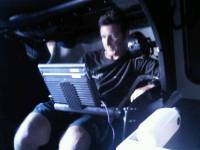 USA25555 Rambler The calm at Guadeloupe enveloped us as well as Hetairos.

are much closer. Now very dark and the lights of Guadeloupe shine bright.

was their first night at sea on ayacht. From Barbuda to Nevis we had

be running! Have now used most of the sail inventory less the storm

under the big kite. Not sure but hoping we may have pulled back some of

the time we lost in start. Whatever we are enjoying great sailing in warm

blue waters and under sparking sun - less the odd squall. However the beat

to St Barts is currently challenging the chefs! Best for know . Paul