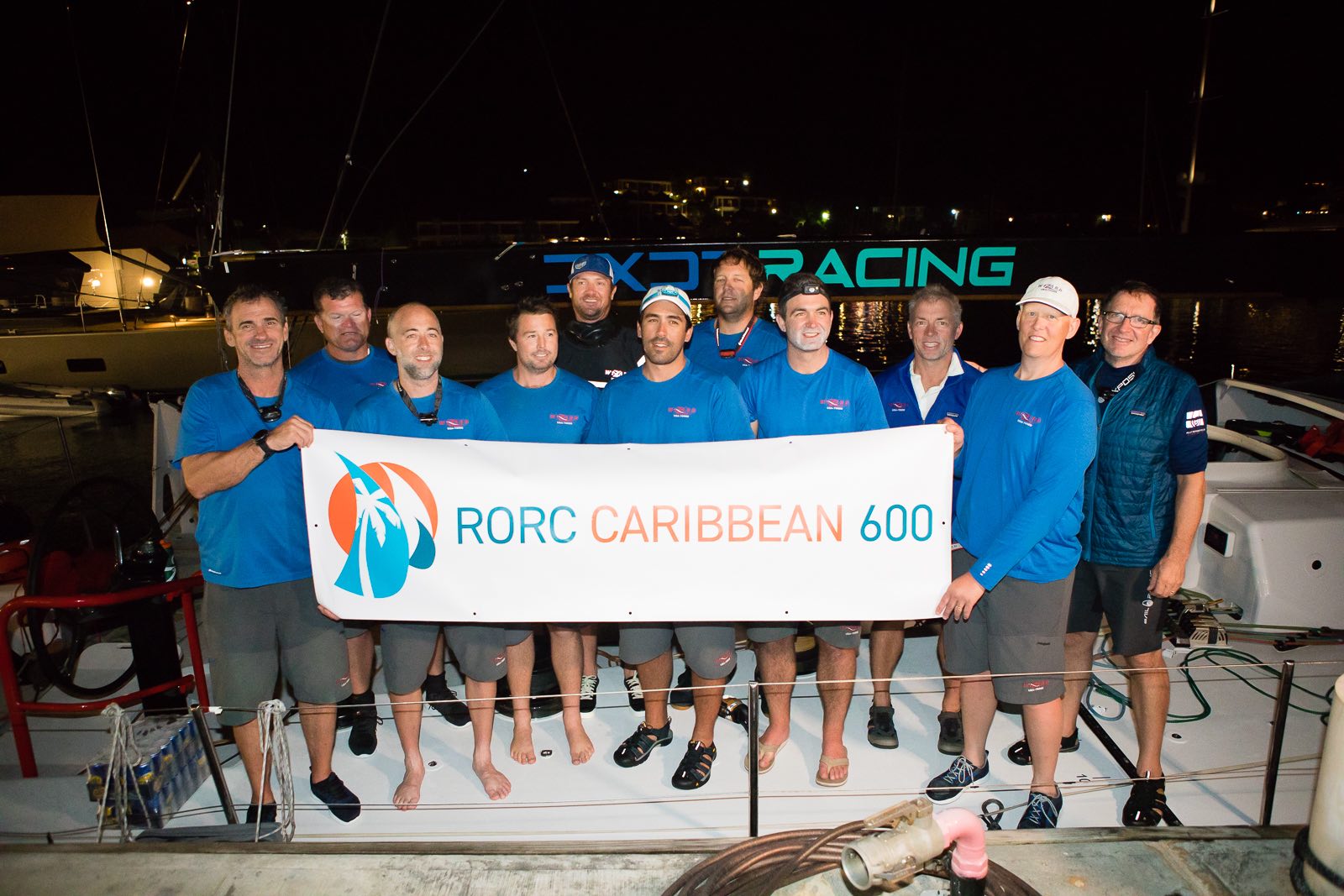 To Wizard the gun - Class winners to come

For the second year in a row, David and Peter Askew’s Volvo 70 Wizard (USA) has taken Monohull Line Honours in the RORC Caribbean 600. Adrian Keller’s Nigel Irens-designed catamaran Allegra (SUI) is the provisional winner of the MOCRA Class. Tilmar Hansen’s German TP52 Outsider has finished the race and is currently the overall leader under IRC for the RORC Caribbean 600 Trophy.

Last year’s overall winner Wizard struggled in the light air for the first part of the race, but lit up having rounded St.Maarten, blast reaching 140nm to Guadeloupe in just 11 hours. Having negotiated the wind shadow behind Guadeloupe, Wizard pulled the trigger, blast reaching in the Atlantic, smoking through the 90nm to Barbuda in just five hours.

“Driving in light airs is pretty sticky,” commented Peter Askew. “We had just had a couple of times where we were at triple zeros, but other than that it was just keeping the boat going the best you could. Wizard is not the best light airs boat, that’s for sure. We had to dig ourselves out of a hole. We finally got around Outsider (TP52) at Monserrat and Prospector (Mini Maxi) at Guadeloupe. We got into really good breeze up to Barbuda, just blast reaching, doing 22-24 knots the whole way.” 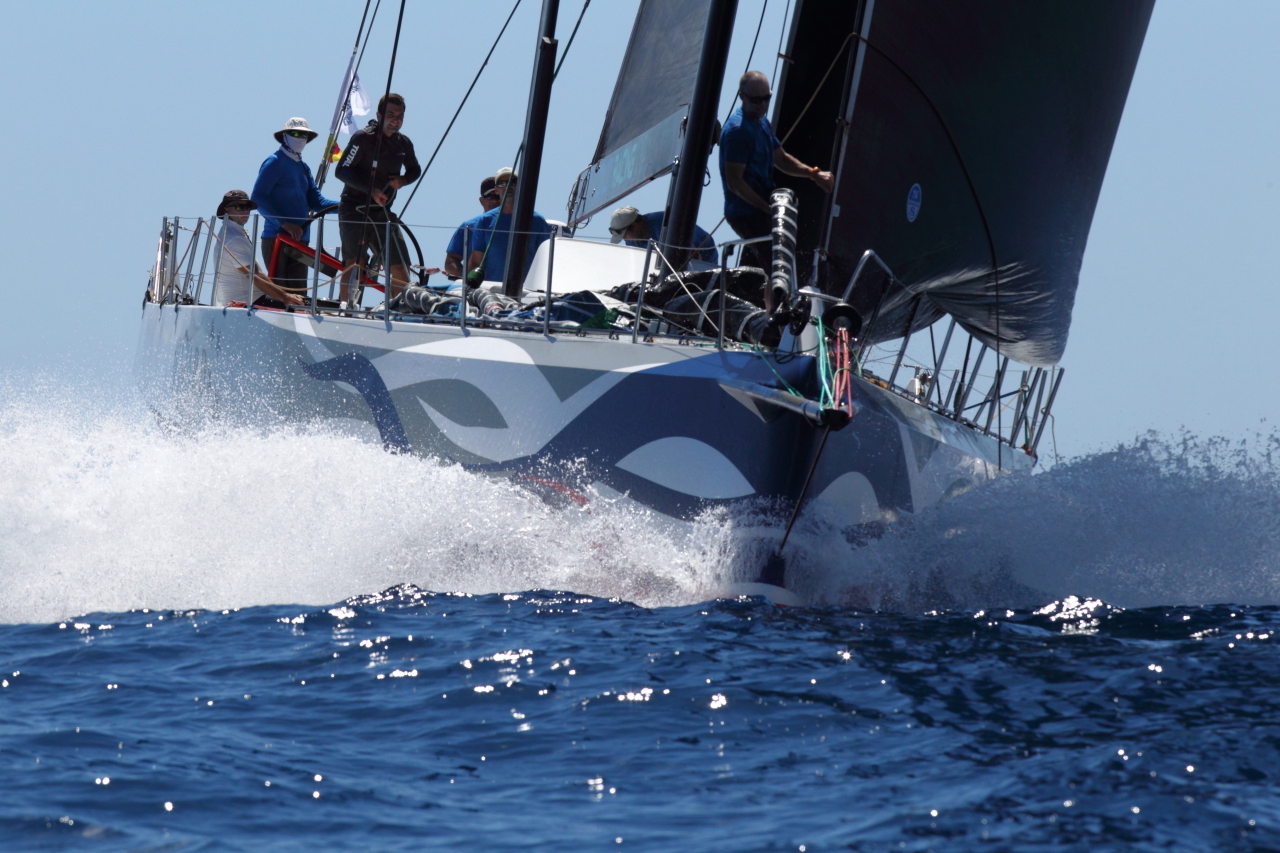 Adrian Keller’s Nigel Irens-designed catamaran Allegra is the provisional winner of the multihull class after MOCRA correction. Allegra has been extended to 83ft with two aft water ballast tanks providing up to 800kg of righting moment. Weighing in at 30 tons, with a full interior, Allegra is the heaviest multihull taking part in this year’s race.

“We didn’t make it to the finish line in the last two long races, so we are very happy and it will be all the sweeter if we win MOCRA,” commented Adrian Keller. “As the heaviest boat we don’t like light air, but a special sail we call a J0 allows us to go pretty tight to the wind. As soon as we get into 15 knots and more we are really fast, and it was tremendous fun. One of the deciding parts of this race was how long you were parked up. We did a good job at most of the islands, but like everyone else, we stopped in the lee of Guadeloupe. However, when you get around the corner and that trade wind hits you, it’s full on.” 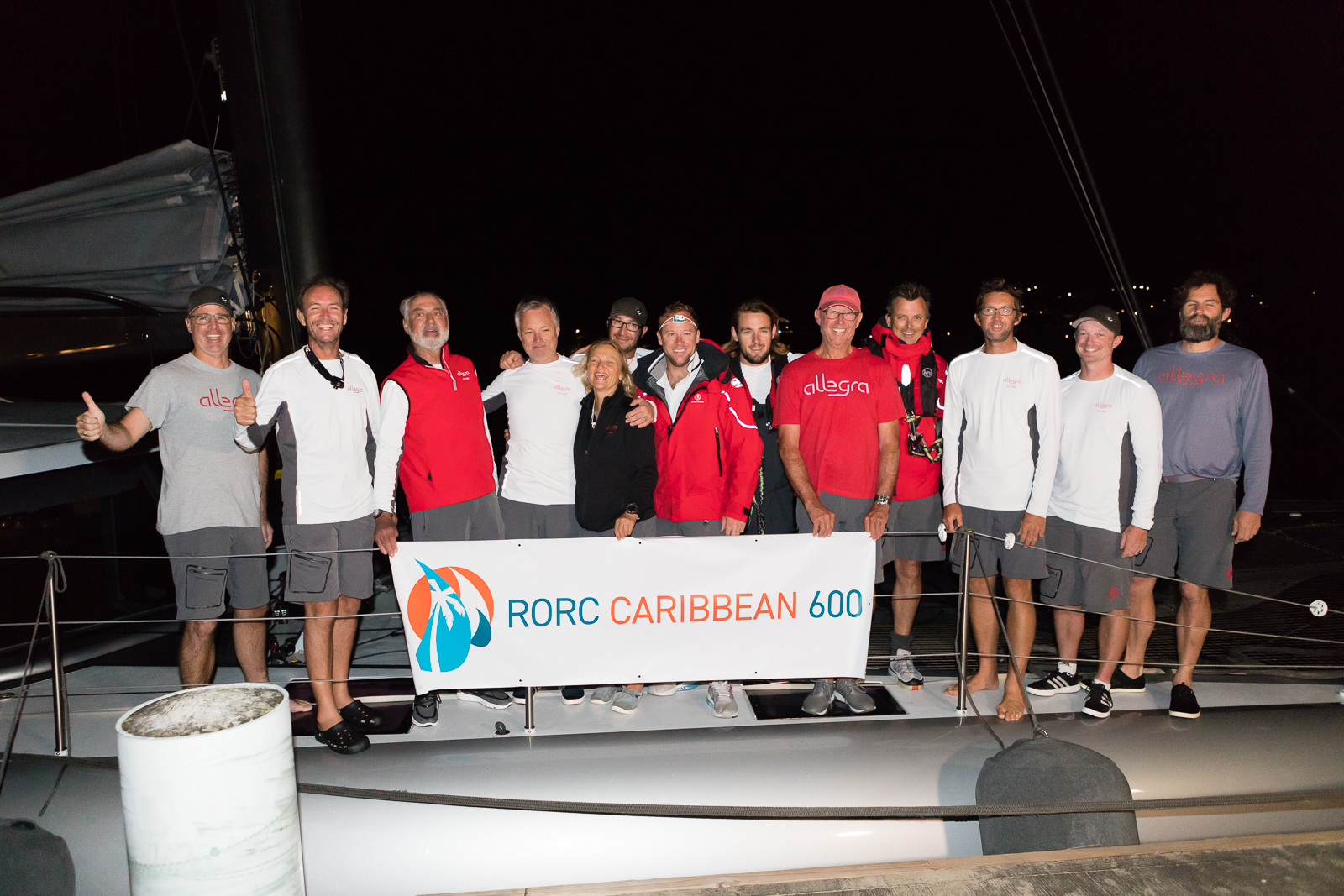 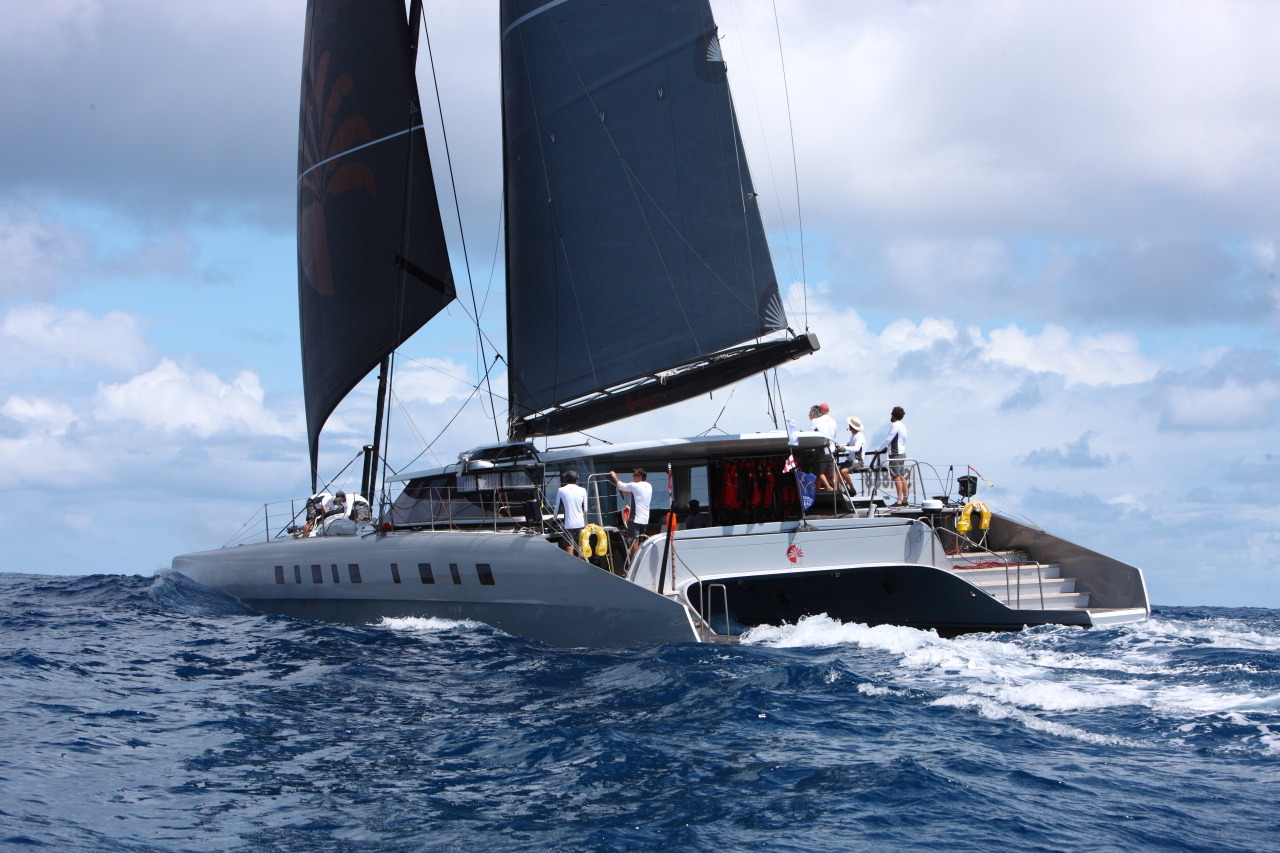 Tilmar Hansen was a happy man this morning as dawn broke on his 70th birthday. Hansen’s TP52 Outsider (GER), skippered by Bo Teichmann, crossed the finish line just after 7 a.m. local time to post the best corrected time so far under IRC.

“We have done a lot of water-proofing since the Rolex Fastnet, and there was definitely more water outside than inside!” smiled Tilmar Hansen. “This race has sunshine, hospitality, and great people. To celebrate my birthday here today, nothing could be better.”

At 1000 (1400 GMT) on Thursday 27th February, 52 yachts are still racing under IRC for the overall win for the RORC Caribbean 600 Trophy. Outsider is leading IRC overall and IRC Zero. A fierce battle is raging in IRC One between two equally matched yachts. Giles Redpath’s Lombard 46 Pata Negra (GBR) and Philippe Frantz’s NMD 43 Albator (FRA) are approaching the Barbuda mark for the second time, with just over 100 miles to go. 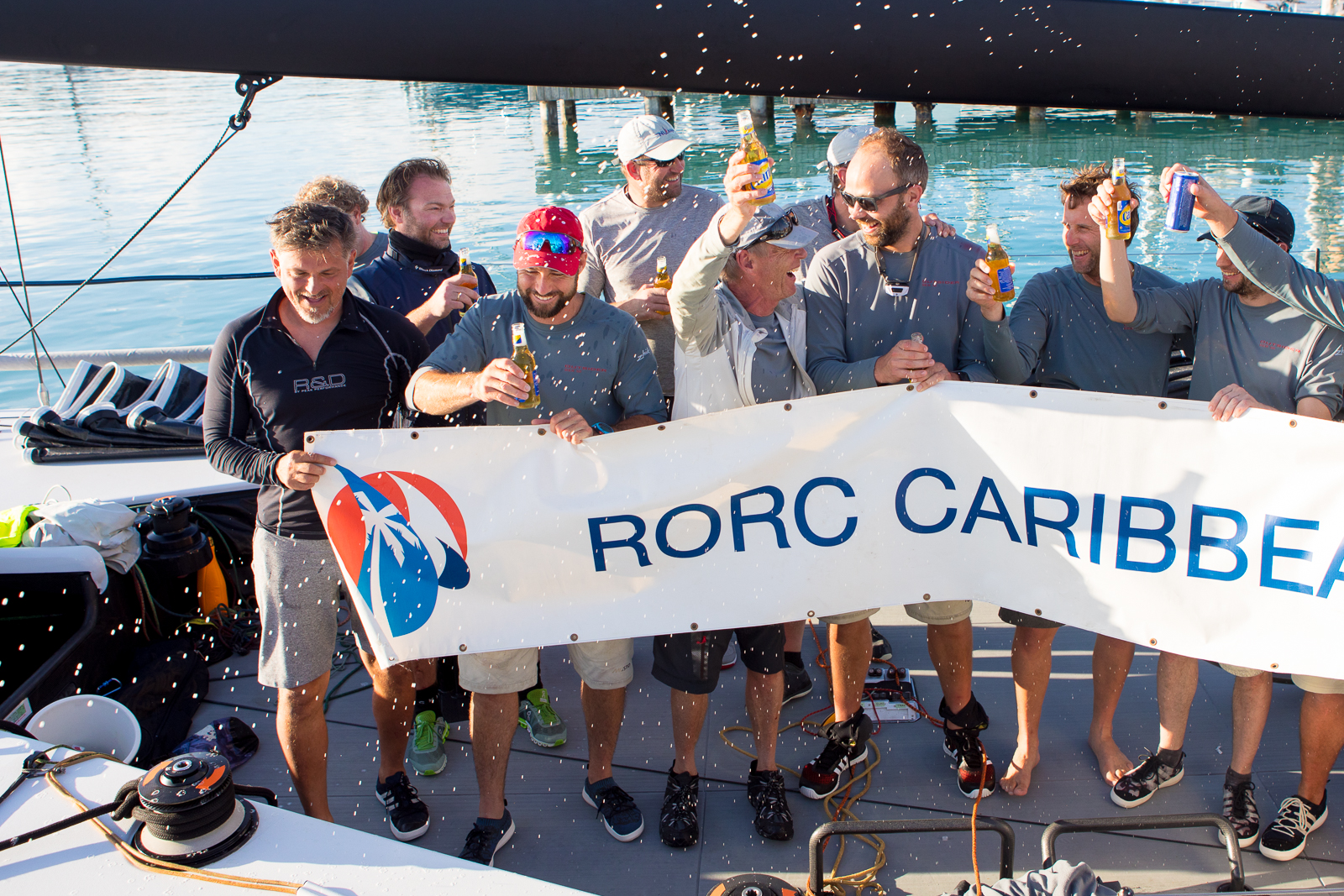 Tilmar Hansen from Kiel, Germany celebrates his birthday after completing the race with his team on TP52 Outsider © Arthur Daniel/RORC 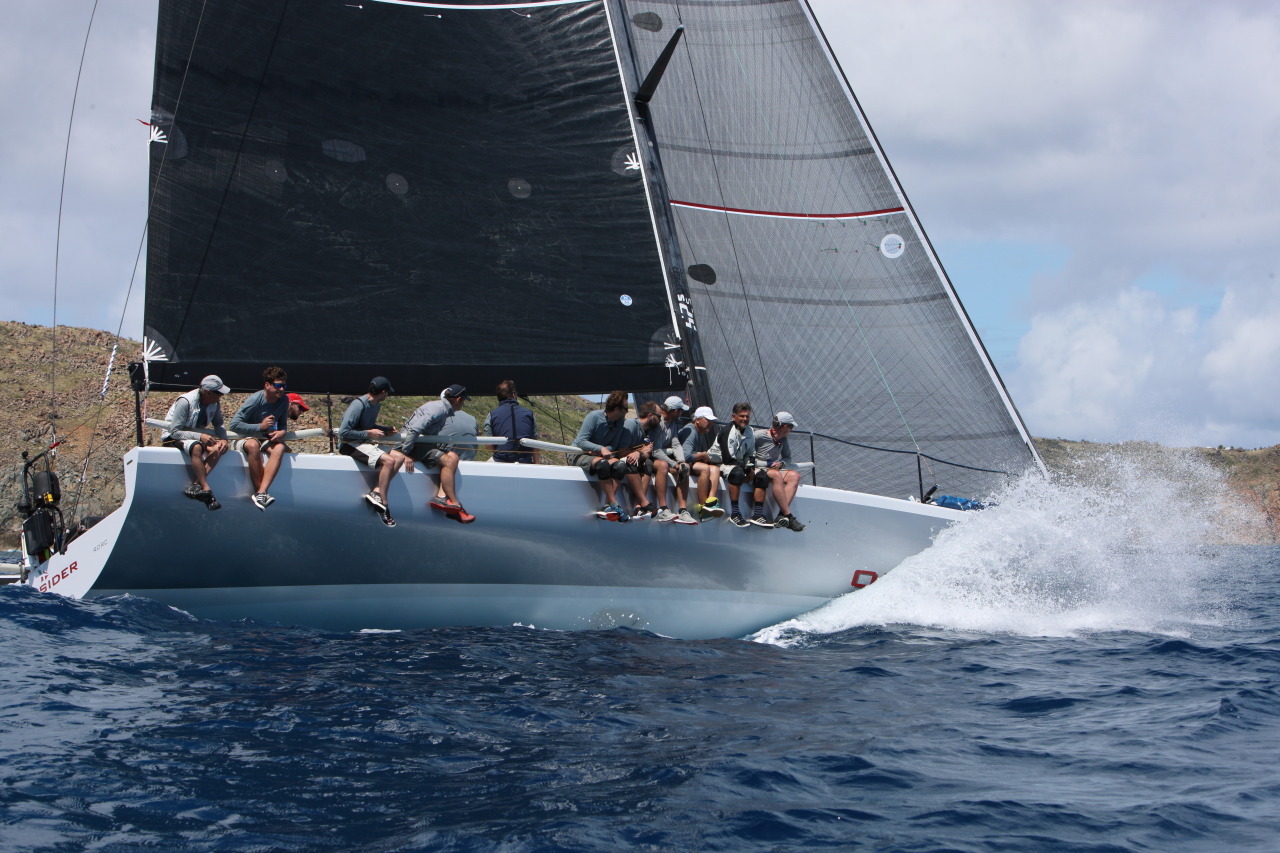 Approximately 180 miles from the finish, the competition is fierce in IRC Two. Ross Applebey’s Oyster 48 Scarlet Oyster (GBR) is estimated to be leading by 43 minutes on corrected time from Global Yacht Racing’s First 47.7 EH01 (GBR), skippered by Andy Middleton. Pamala Baldwin’s J/122 Liquid (ANT) is estimated to be just an hour off the lead after time correction.

In IRC Three, Peter McWhinnie’s Larchmont YC team racing JPK 10.80 In Theory (USA) is leading the class on the water and estimated to have a solid lead after IRC correction. In the Class40 Division, 115nm from the finish, BHB sailed by Arthur Hubert is dead-level with Morgane Ursault Poupon’s UP Sailing.