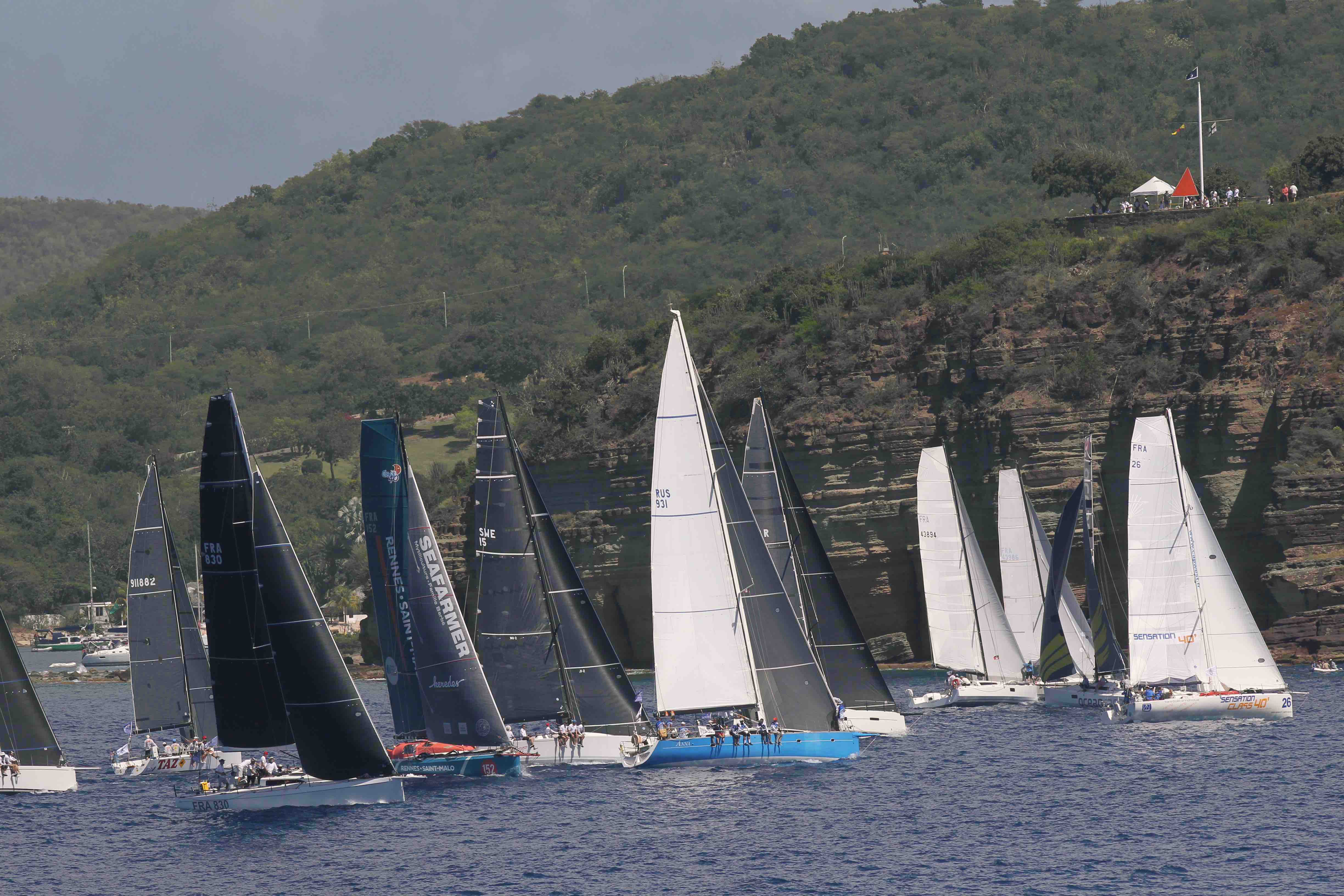 Sparkling conditions prevailed for the start of the 12th edition of the RORC Caribbean 600, organised by the Royal Ocean Racing Club.

The impressive 73-boat fleet gathered outside Antigua’s English Harbour, relishing the prospect of racing 600nm in stunning conditions. A light south easterly breeze gave a gentle start to the race, but the fierce competition was exemplified by highly competitive starts right through the fleet. Lighter than usual conditions are forecast for the first 24-hours of the race, adding another level of strategy to the fascinating race around 11 Caribbean islands. 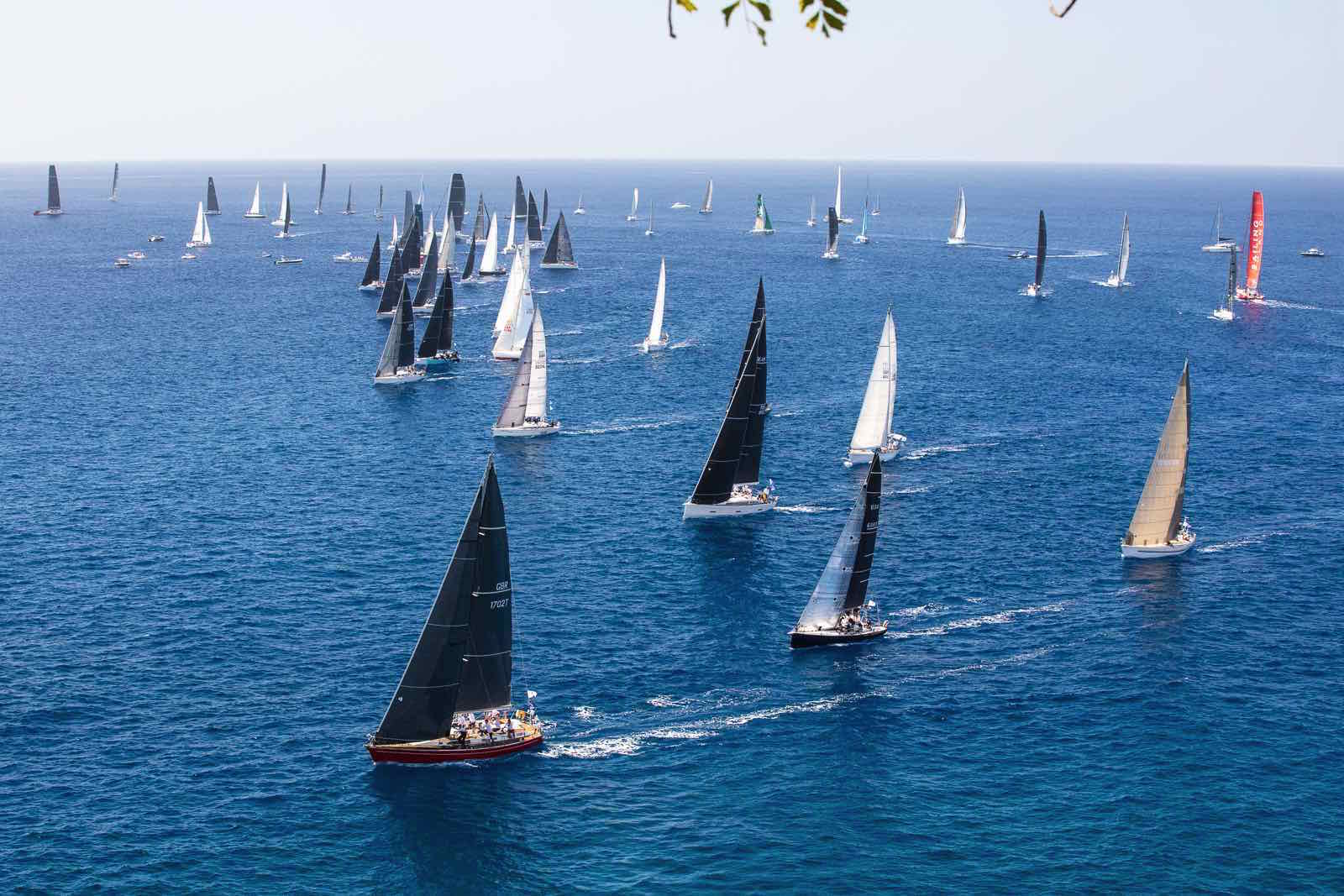 First to go was the combined IRC Three and IRC Two fleet of 26 boats. Ross Applebey’s Oyster 48 Scarlet Oyster (GBR) got away well inshore taking the advantage of wind acceleration along the cliffs. Peter McWhinnie’s JPK 10.80 In Theory (USA) chose the same strategy. The competitive start featured a number of boats starting towards the pin end of the line, among them Pamala Baldwin’s J/122 Liquid (ANT) got a great start and chose to stay offshore to Green Island which paid off for the young team skippered by Jules White. 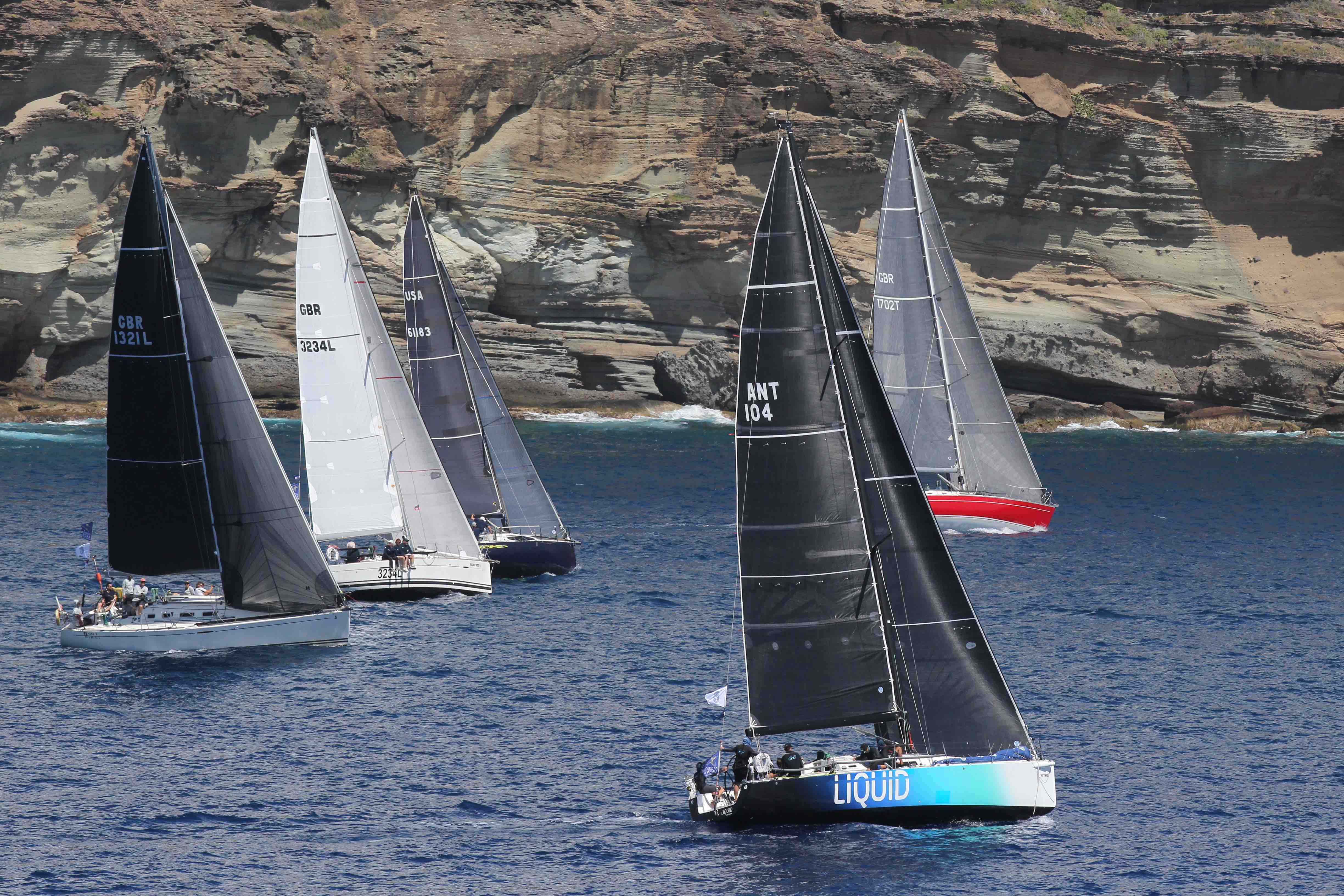 Liquid was estimated to be leading IRC Two after two hours of racing and was 10 minutes ahead of Scarlet Oyster at Green Island. In Theory was the first boat in IRC 3 to round Green Island, eight minutes ahead of First 40.7 Escapado, skippered by Stuart Dahlgren (CAN).

The second start was for IRC One and the Class40 division, featuring 23 teams. Pogo 36 Aminata (FRA) sailed by Andy Young got a great start inshore as did Jean-Marc Calmet’s Pogo 12.50 Purple Rain (FRA). Morgen Watson and Meg Reilly's Pogo 12.50 Hermes was over-eager and called OCS, but returned and re-started correctly. Marc Lepesqueux’s Sensation (FRA) also started well. On the outer end of the line Philippe Frantz’s NMD43 Albator got the best start. In the Class40 Division, BHB (FRA) sailed by Arthur Hubert got off to a flyer and leads the division by about a mile. Three hours into the race, Jonas Grander’s Elliott 44 Matador (SWE) was estimated to be leading IRC One after time correction. Matador passed Green Island nine minutes ahead of Mikhail Mataruev’s Mobile 53 Anna (RUS). 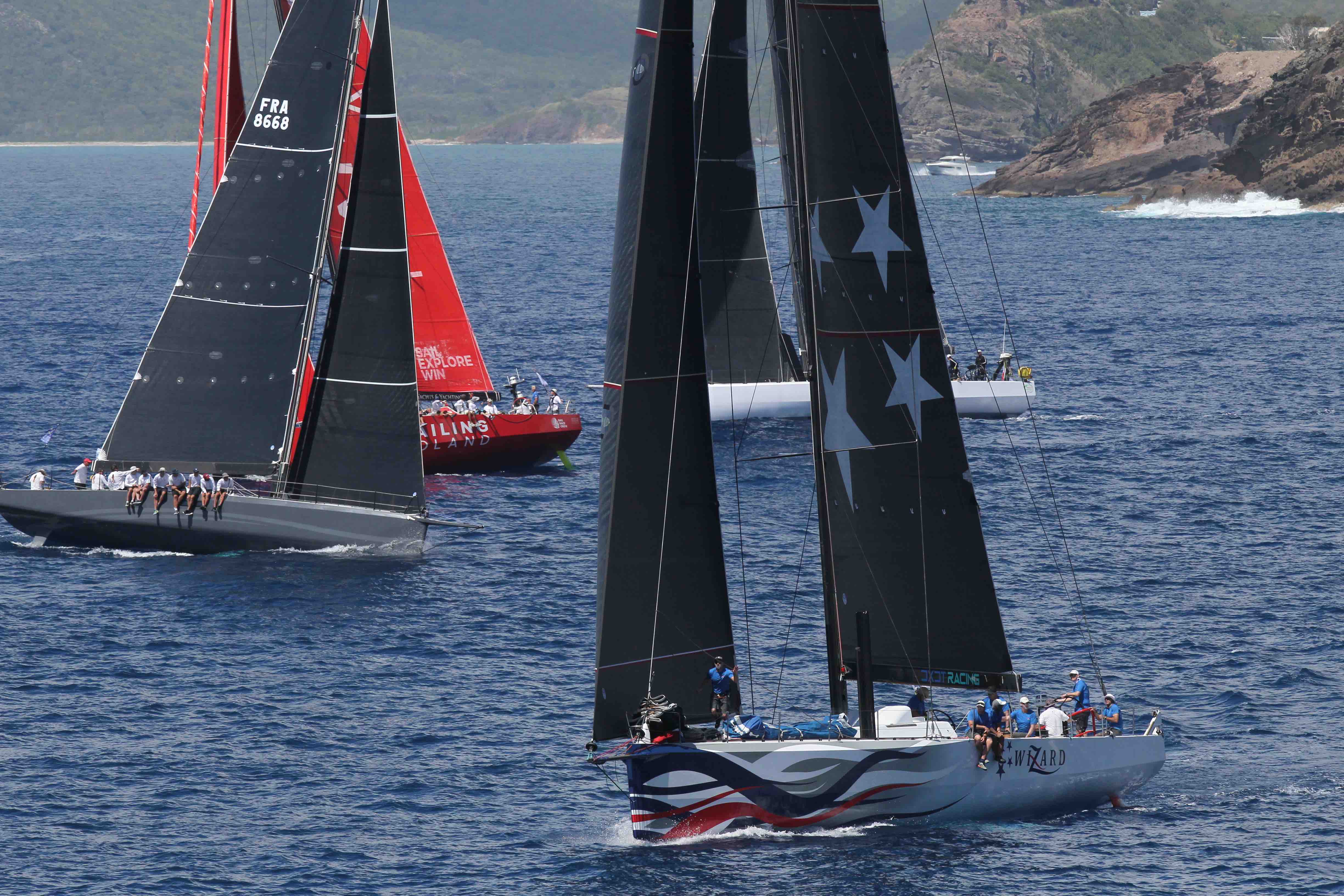 A competitive start for IRC Zero in the 2020 RORC Caribbean 600 © Tim Wight / photoaction.com

The IRC Zero start featuring 17 of the fastest monohulls in the race was highly aggressive. Tilmar Hansen’s TP52 Outsider (GER) was pushing up Johannes Schwartz’s VO70 Green Dragon and subsequently Mills 68 Prospector was squeezed up to cross the line before the gun. Green Dragon just managed to stay behind the line, but Outsider at full speed crossed the line to perfection on the favoured left side of the course. However, Prospector found great boat speed to take a lead on the water. Passing Green Island, Prospector was 22 minutes ahead of Wizard. On the reach towards Barbuda, two Volvo 70s came to the fore. Grzegorz Baranowski’s I love Poland (POL) locked horns with Peter & David Askew’s Wizard (USA) in a race to claim the lead on the water.

Ron Hanley’s Cookson 50 Privateer (USA) is out of the race. All of the crew are safe and back in Antigua, as is the boat minus its rudder. “Our instruments were showing us in 20ft of water off Half Moon Bay but we must have hit a rock,” commented Ron O’Hanley. “The rudder broke right off and with no steerage we sailed the boat offshore, tacking to keep on course to get to a spot to anchor. ABSAR (Antigua Barbuda Search and Rescue) got to us in 30 minutes and did a really professional job - we owe them a huge thanks and will do so via a donation.” 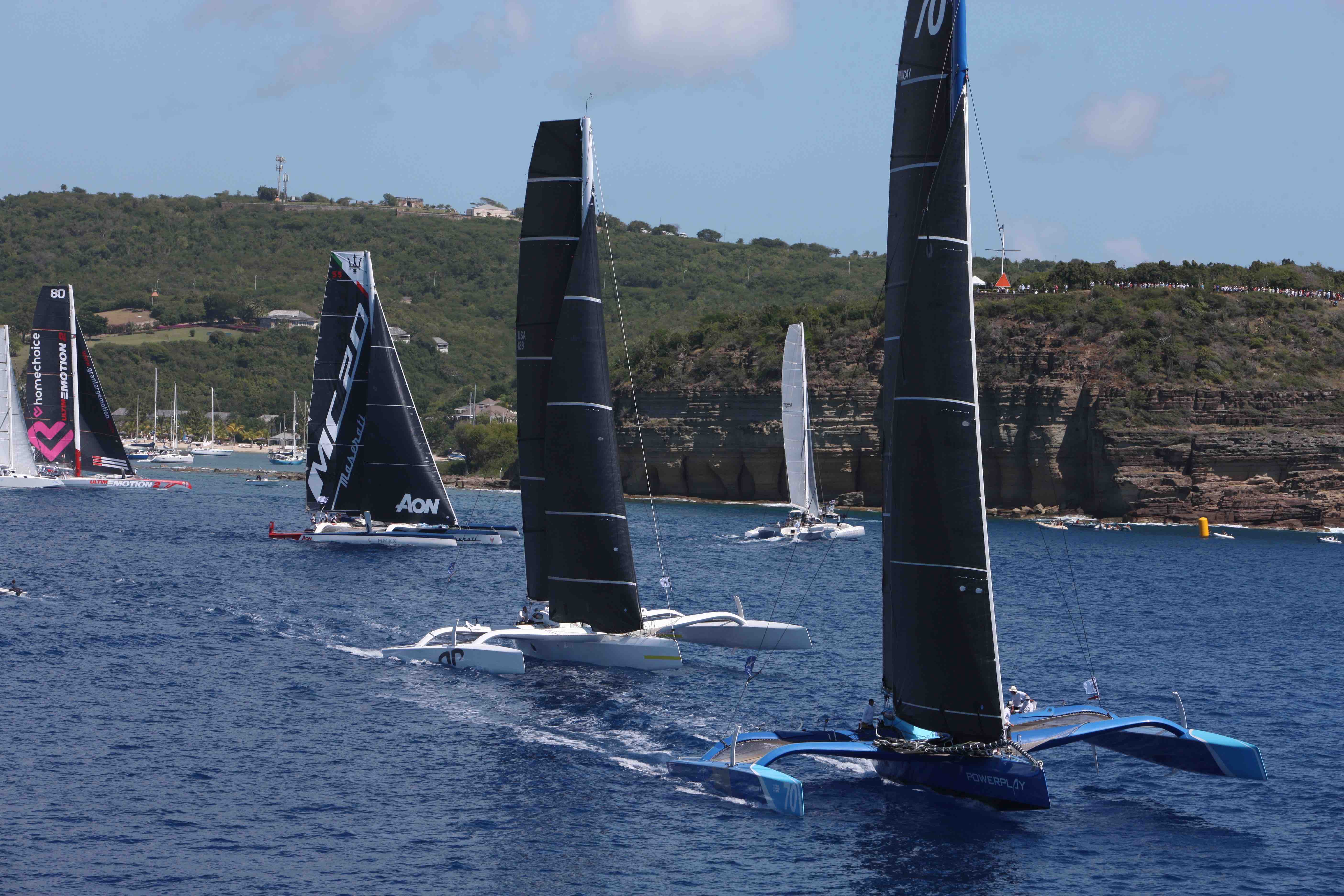 Eight multihulls made an impressive sight for spectators for the final start of this year's RORC Caribbean 600 © Tim Wight / photoaction.com

The Multihull start featured eight teams. Jason Carroll’s MOD70 Argo (USA) got away well on the outer end of the line, a boat length ahead of Peter Cunningham’s MOD70 PowerPlay (CAY). Giovanni Soldini’s Multi70 Maserati chose the inshore end of the line and started well, passing Green Island 33 seconds ahead of Argo. However, the best start in the MOCRA Class was right under the cliffs by Stephen Bourne’s Rapido 60 Ineffable (HKG). Maserati took the inside line and was ahead by Green Island. Three hours into the race, the leading pack of multihulls was approaching Barbuda. Argo led the charge, followed by PowerPlay and Maserati was a mile astern of the leaders. There is a high expectation of these teams mixing it up over the entire course.

RORC Racing Manager, Chris Stone commented: “It was a good start, it was always going to be tricky with the light wind, we had six to nine knots of breeze that had a few subtle shifts. The fleet will now be settling in and we have already seen place changes and that is going to be going on right through the race. From the RORC perspective, the teams were all in good order before the start in terms of paperwork and safety inspections. We wish them all a safe race. Our key safety aspect during the race is to monitor their progress and we have our fantastic volunteers waiting in the wings to welcome the crews back to Antigua.