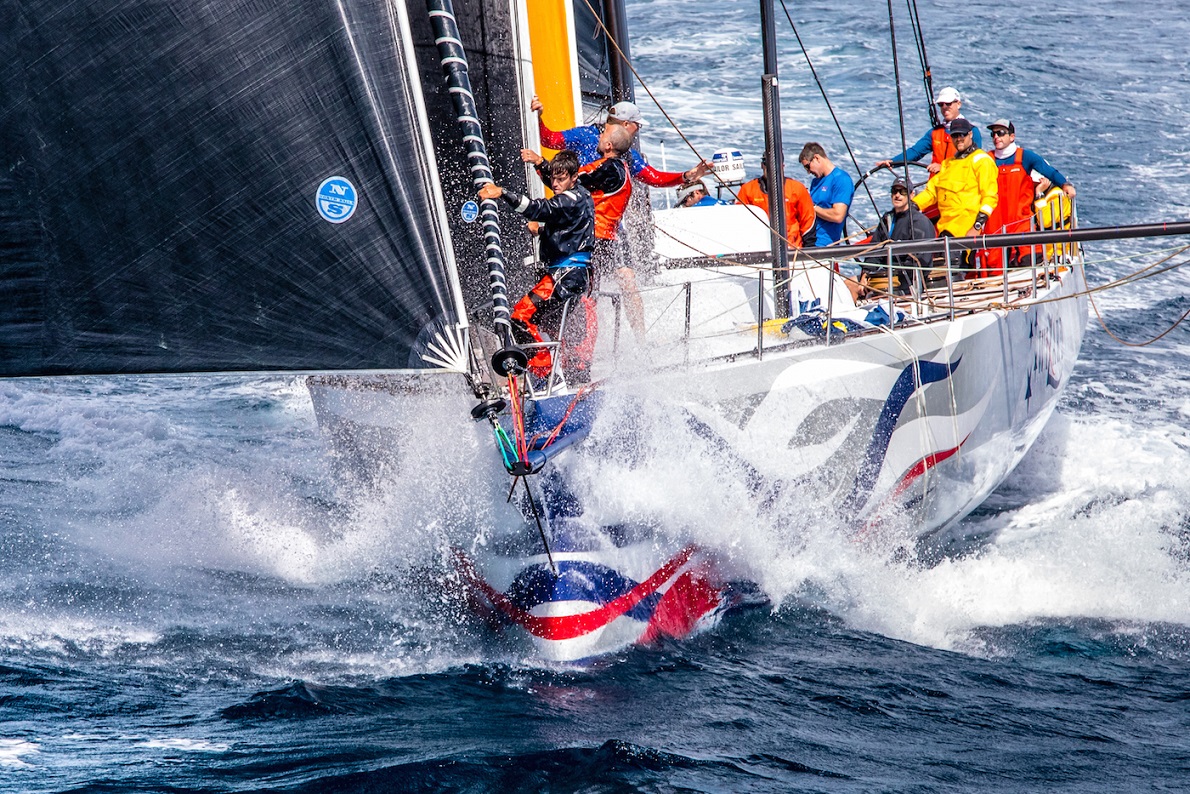 “This race is one that my brother and I have always wanted to do because it is one of the great ocean races now, even though it is a fairly young one,” commented David Askew. “One thing we were adamant about was doing it with the right type of boat because we always want to win a race. Ninety percent of success is the preparation and we have just completed a major refit on Wizard. We have been working with most of this team for five years and have a great time together. It is critical to have a crew that not only know how to push the boat hard, but also when to do it. We felt confident coming into this race that the boat and the crew would perform.”

“My brother and I have raced together since we were kids and this race has been a blast,” commented Peter Askew. “18-22 knots of solid trades and this boat is so fast on a reach, planing along at 22-25 knots, that is what makes this race so great. There is always something going on around these beautiful islands. This is the first time I have been to Antigua and the welcome has been phenomenal. People are friendly and there’s a lot of stuff going on in Falmouth; live music, good food and great weather. Why would you not come back?” 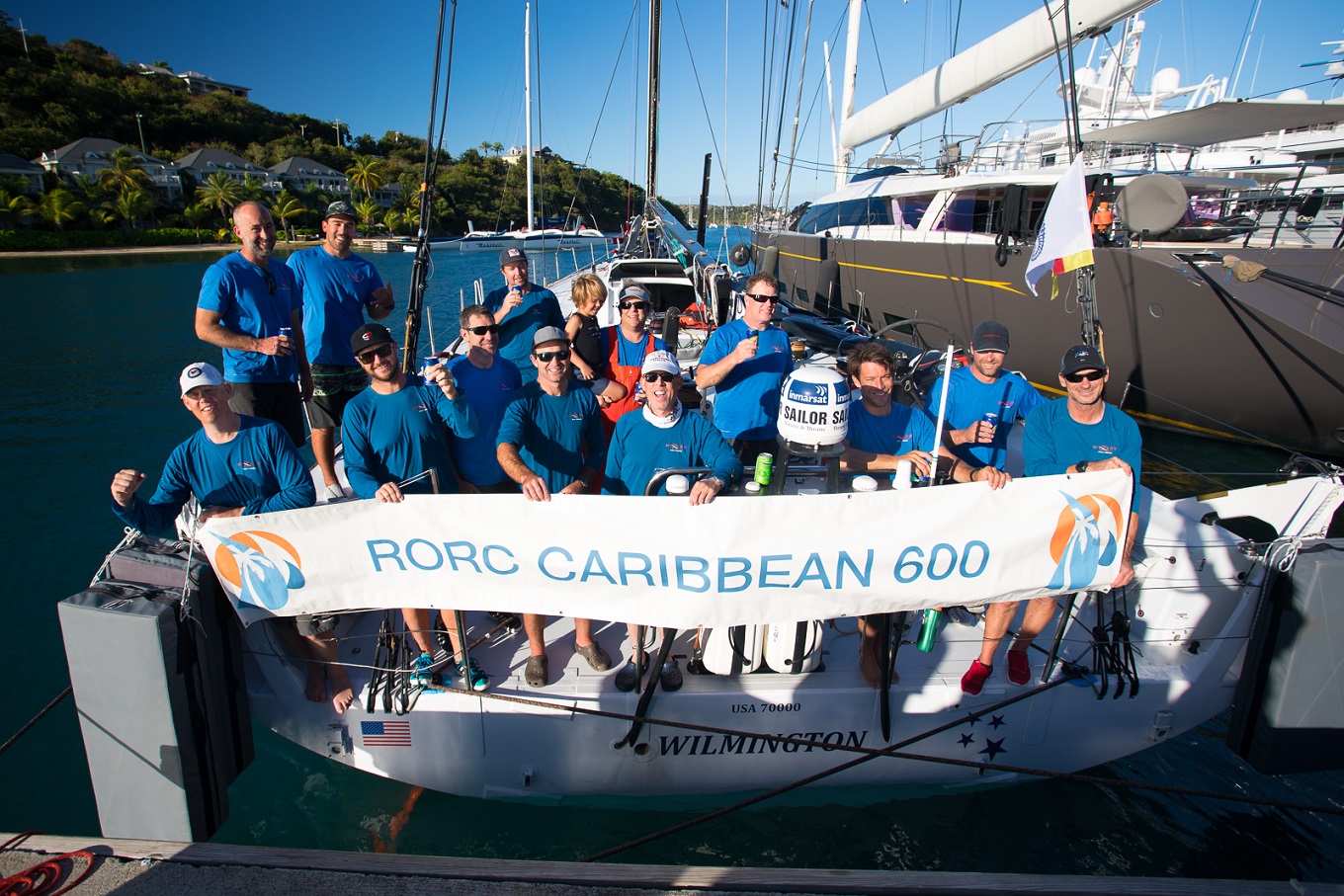 Team shot on the dock for Wizard © Arthur Daniel/RORC

Greg Slyngstad (USA) racing his Bieker 53 Fujin finished the race just over 20 minutes after Volvo 70 Wizard, and after MOCRA time correction has beaten both Maserati Multi70 and Argo to lead the class. Six multihulls are still racing, including John Gallagher's Gunboat 62 Chim Chim, which is still very much in contention for the class win. Fujin made headlines in last year's uber-windy race, dramatically capsizing at night off the island of Saba. This year, Fujin finished the race and showed the amazing capabilities of both type boat and the crew. 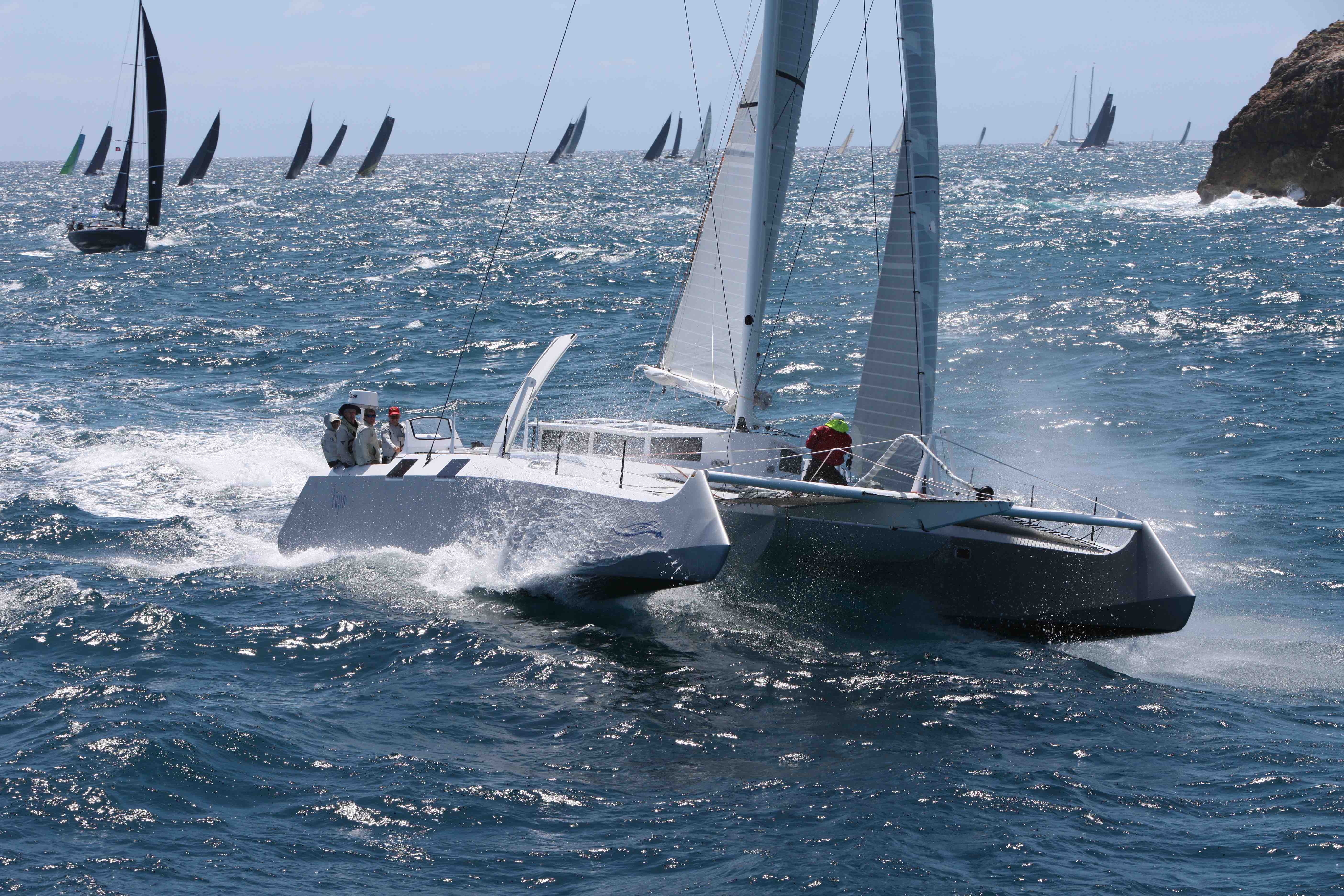 “It was ideal conditions for Fujin and we pushed the boat really hard,” commented Greg Slyngstad. “We were trading places with Wizard back and forth and it helped to have somebody to keep pace with. If they were ahead, we could see what was coming with the weather, and if they were behind, we tried to keep them there. It was a little emotional getting to Saba this time,” continued Slyngstad referring to their capsize last year at the island. “I was off watch but I can assure you I was fully awake. We didn't mention last year's accident at all, but I am sure it was in the front of everyone's thoughts. When we finished the race, we toasted a bottle of rum that was saved from last year. If we do win our class it will be amazing, but win or lose, I am so proud of the whole team that put Fujin back together.”

Peter Isler, America's Cup winner and navigator on Fujin was full of praise for both the team and the Beiker-designed Fujin. Giving details on the upwind start that put Fujin in a superb position from the get-go, he said: “We had a great first leg. Jonathan (McKee) and Greg (Slyngstad) did a great job plugging us in for the race and the whole team was masterful handling the boat in tight corners. The most important thing was knowing when to put the bow down with a little boat and go for it, and we took a perfect lane and hit that inner layline cutting off an immense amount of distance, putting us way ahead at Green Island.” 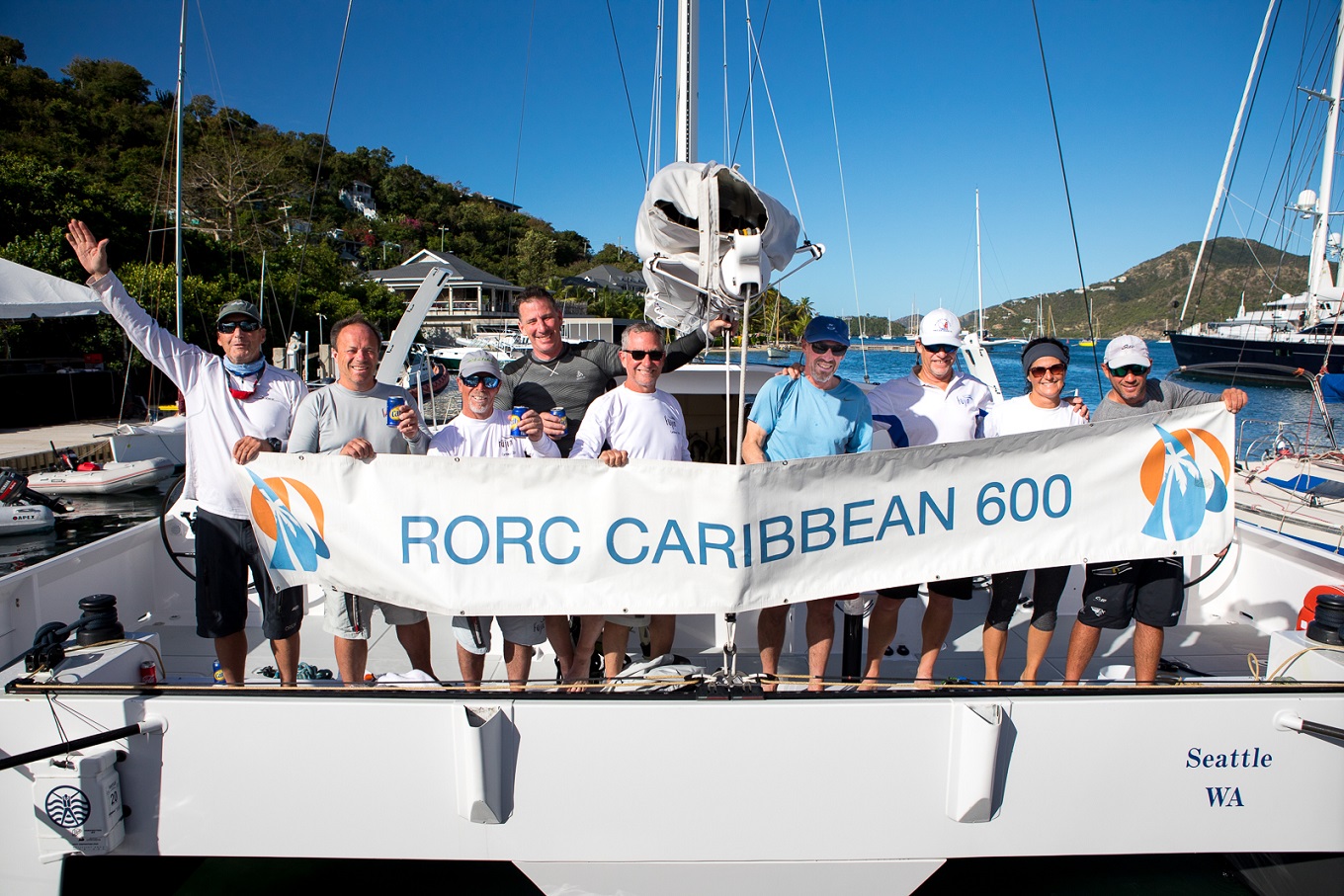 Runner-up for Monohull Line Honours was the magnificent 115ft Baltic sloop Nikata, who completed the race in almost exactly 48 hours. Nikata's owner, guests and crew were greeted dockside by Eddie Warden Owen, Chief Executive of the Royal Ocean Racing Club and dozens of well-wishers gave three cheers to the team. 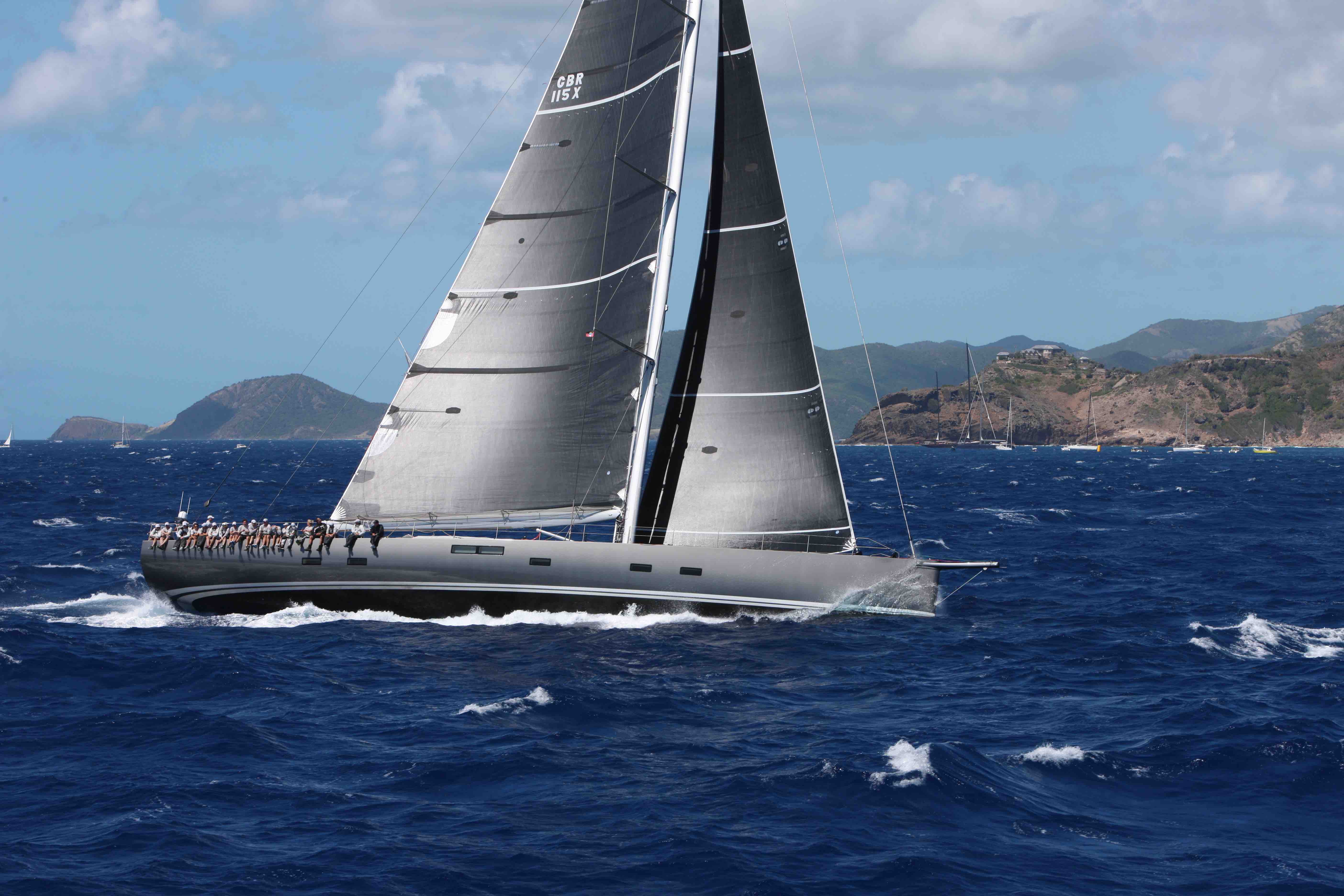 “Nikata is a big boat, super-quick, powerful, and we had a top speed of 25 knots,” commented Nikata's navigator Aksel Maghdal. “Nikata has more comfort than the race crew is used to, but the systems on board have been developed for racing, just as much as a full-on race boat; it just takes a bit longer with big gear. The RORC Caribbean 600 is super-busy for any boat and you see so many spectacular islands. We passed in the lee of Guadeloupe during the day and all 28 crew took a look through the binoculars. For a superyacht it is a quick race of about two or three days and it is one for any owner to put in his calendar for sure.”

At 1100 AST on the third day of the RORC Caribbean 600 - Wednesday 20th February - 63 boats were still racing, with the majority of the fleet in the southern part of the course. The Antigua Yacht Club is bracing itself for hundreds of sailors to return to Antigua. Every boat is met by enthusiastic volunteers with a warm welcome and cold beer, and the Yacht Club is open 24-7 throughout the race.

An epic finish is on the bill for the Class40 fleet, with just 16 minutes separating the leading three yachts. Aymeric Chappellier's Aïna Enfance Et Avenir is just in the lead; in his rear view mirror Chappellier can see Catherine Pourre's Eärendil and Luke Berry's Lamotte - Module Création blast-reaching at 20 knots in hot pursuit. The leading Class40s are 140 miles from the finish. The intense battle is due to come to a conclusion in the early hours of tomorrow (Thursday 21 February).

In IRC One, the estimated IRC ranking for the class shows a close battle at the front of the fleet. Gibb Kane (USA) racing Swan 66 Bounty was in pole position rounding La Desirade and no doubt relishing the prospect of a blast reach to Barbuda. Giles Redpath's Lombard 46 Pata Negra, skippered by Andy Liss (GBR) was second; Jyrki Maeki's Swan 57 Lintu (FIN) and Andrew Berdon's Marten 49 Summer Storm (USA) were battling for third.

In IRC Three, Jonty and Vicki Layfield's Swan 48 Sleeper X (GBR) is estimated to be leading the class by just over one hour from Trevor Middleton's Sun Fast 3600 Black Sheep (GBR). The two teams are racing alongside each other, playing the wind shadow of Guadeloupe. After rounding the largest island of the course, the waterline length of Sleeper X, versus the planing ability of Black Sheep will be an interesting contrast of strengths for the blast reach to Barbuda.