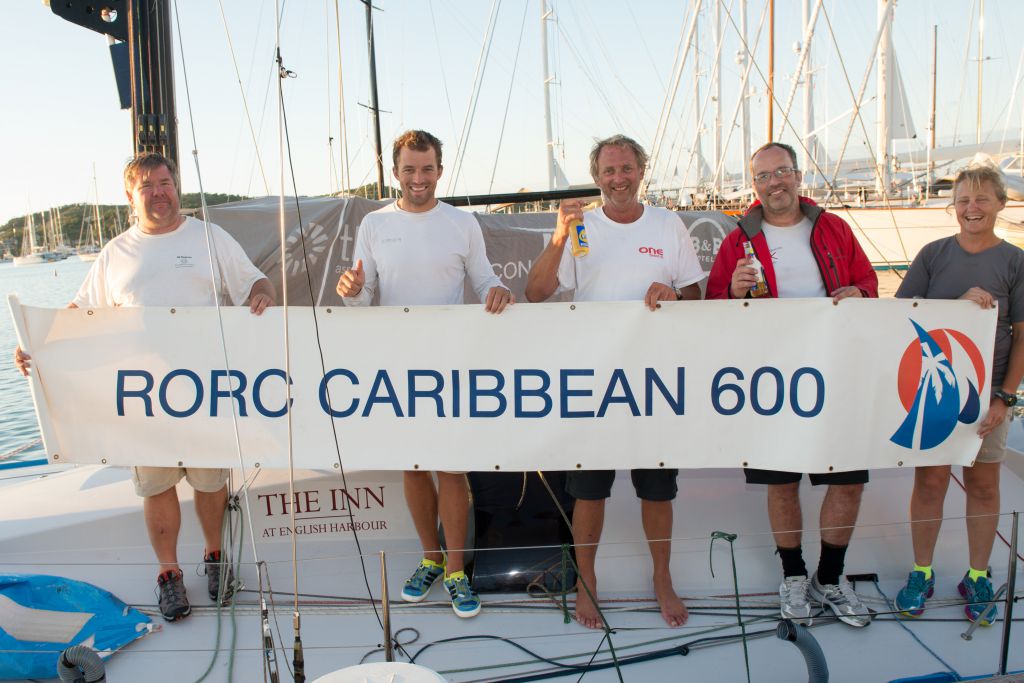 As dawn broke on Day 5 of the RORC Caribbean 600, crews who had finished the race were beginning to arrive back in Antigua. Every boat, regardless of where they were moored, was met by the RORC Caribbean 600 volunteers, armed with a celebration banner and cold beer. The restaurants and coffee shops around Falmouth Harbour were filling up with sailors, hungry for a square meal and full of stories about their RORC Caribbean 600.

At Dawn on the fifth day, the leading Class40s were approaching the finish. Throughout the race, the battle in the class had been intense, with three yachts taking the lead at various points along the course. Peter Harding's Phor-ty was leading at Redonda, just ahead of Catherine Pourre's Eärendil and Halvard Mabire's Campagne de France was in third. All three yachts started the beat to finish with a chance of victory. However, Eärendil's main halyard broke as the team hardened up for the beat and they were forced to reef and re-hoist. Phor-ty extended on the beat to take the gun and the class win by just 33 minutes. With Eärendil under-powered, Campagne de France closed the gap and overtook them, just before the finish line, to snatch second place by just under two minutes. 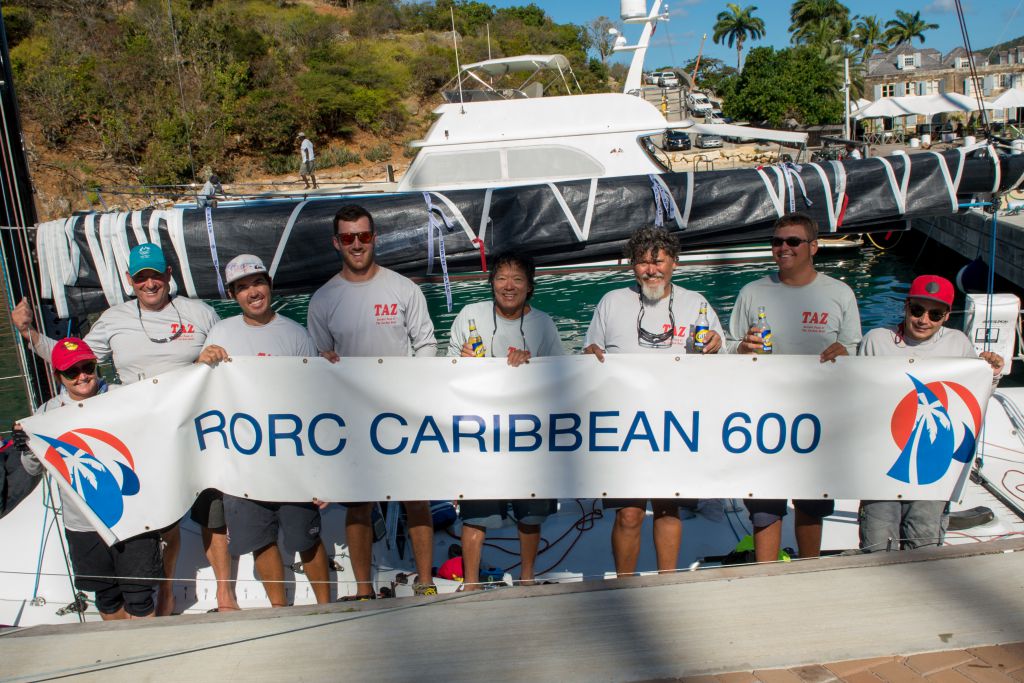 An emotional win in IRC One for Antigua's Bernie Evan Wong and his crew on the RP37, Taz © RORC/Ted Martin

In IRC One, Antigua's Bernie Evan Wong was tired but overjoyed to win the class racing his Antiguan RP37, Taz. Bernie has competed in all nine editions of the race and is proud to represent Antigua & Barbuda.

"Unbelievable, just amazing," smiled Bernie, full of emotion. "The team worked so hard, but was also a really happy bunch. I remember trying to take a rest but I couldn't sleep because there was so much laughter on the boat. We are the smallest boat in the race and to beat all of the big boats in our class is like a dream come true." 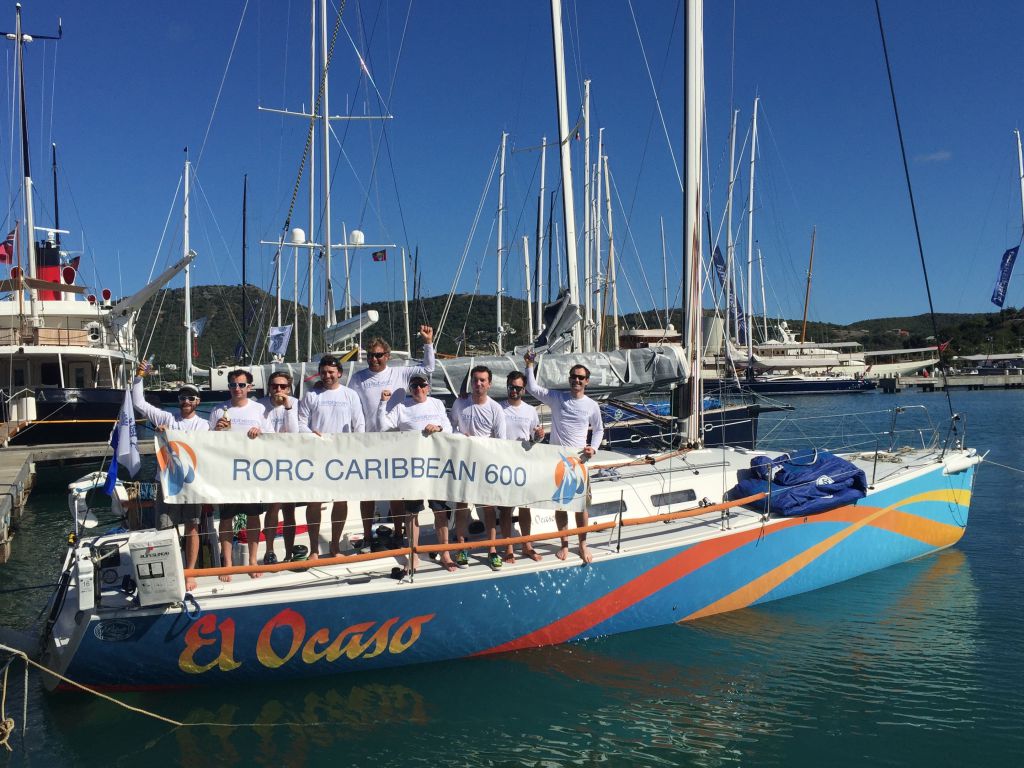 In IRC Two, Ed Fishwick's J/122 Redshift on El Ocaso is the winner.

"We have competed in this race with classic trade wind conditions, but this year we had a massive variety in weather on the course from big breeze in squalls, to fickle light winds. The guys did a fantastic job and we all agreed that this was the best 600 we have ever done. The whole crew was sensational," commented skipper, Ed Fishwick.

"I couldn't have picked a better offshore race than the RORC Caribbean 600. It was a really cool experience, a great bunch of guys and my first offshore race," exclaimed Olympic 470 Silver medallist, Luke Patience.

"Day one we saw a water spout, hump back whales; it was all kicking off, just epic! It was wonderful steering a boat at night, sailing by feeling the flow underneath you. The watches just flew by, I really enjoyed the race and it was very inspiring. The difference between offshore and Olympic sailing is that this is relentless, you are at it day and night. Where the two are wildly different is that with offshore sailing you are not in control all the time, you have to give a good handover to the next watch. However both disciplines require that you never take your foot of the gas."

While Redshift on El Ocaso is the provisional winner for IRC Two, a battle is raging for the remaining podium places between three British yachts. Ross Applebey's Oyster 48, Scarlet Oyster is currently estimated to be in second place. Dominic Hurndall's British Grand Soleil 43, Jua Kali in third. Andy Middleton's First 47.7, EH01 is in fourth.

Hap Fauth's American Maxi72, Bella Mente has been declared the overall winner of the RORC Caribbean 600 Trophy. Whilst yachts are still racing, none of the fleet can beat Bella Mente's corrected time under IRC. This is the second time Bella Mente has won the race overall and was a sweet victory after retiring last year with keel problems.