Classics in the RORC Caribbean 600

The RORC Caribbean 600 attracts the world's fastest racing yachts, magnificent superyachts and corinthian production cruisers. Gathered in Antigua for the start of the 600-mile blast around 11 Caribbean islands, the fleet is a phenomenal sight. Among the spectacular entries this year are two colossal schooners; Eleonora and Adela, with at least 12 classic-designed yachts joining them on the race course.

Adela dates back to 1903 and at 182ft (55 metres), she is the largest yacht competing in the race. Displacing 250 tons and capable of 17 knots of boat speed, the forces on board are off the charts; the mainsail alone can generate 50 tons of load. Adela has an extraordinary record in the race; coming in the top ten overall under IRC in all four races she has competed in, including third overall in 2013. Adela is unbeaten in the Spirit of Tradition Class and is likely to have 35 crew for this year's race. Since she last competed in 2015, the schooner has undergone major modifications to her rudder and keel. Changing a headsail on Adela requires crew out on her mighty bowsprit, a position for agile, strong and trustworthy crew.

"We are really starting from scratch in terms of how to sail Adela after the refit," commented crew boss Guy Salter. "There have also been a few changes to the crew, so we will be working on boat handling in the run up to the race. We still have ‘Shag’ on the helm and that is a good thing. Experienced guys from the Maxi era are the closest thing to experts on driving these sort of boats and when you have crew on the bowsprit, which is really just an extension of the foredeck, you need someone on the helm who knows how to drive a displacement yacht. He won't come up at a mark until it is safe to do so. Protecting the crew is the most important part of the race." 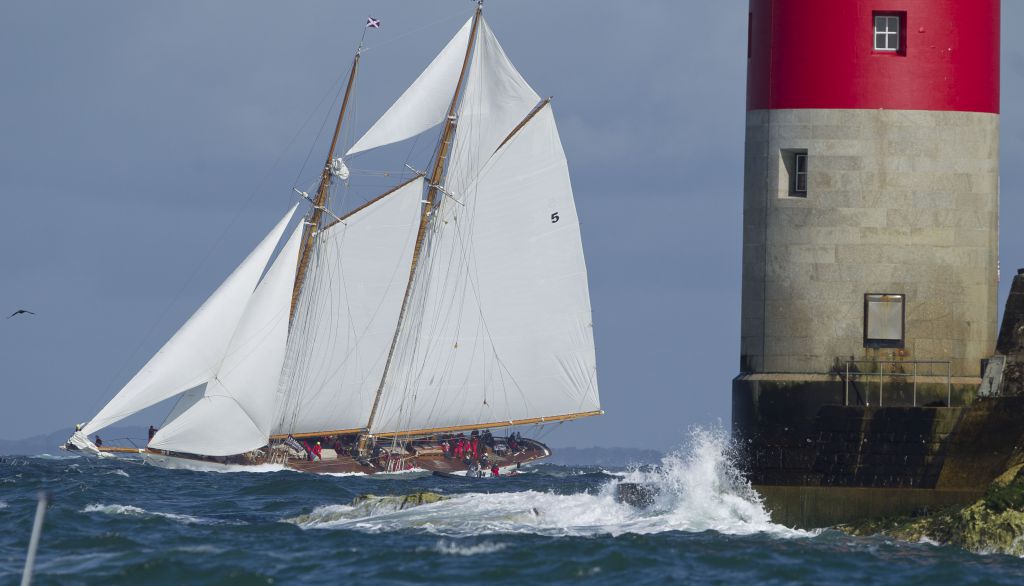 The crew of the 162ft Eleonora, the exact replica of the famous 1910 Herreshoff schooner Westward will include members of the Royal Yacht Squadron and Royal Ocean Racing Club © onEdition

Displacing 213 tons with an overall length of 162ft (49.5 metres), Eleonora is an exact replica of the famous 1910 Herreshoff schooner Westward. Since her launch in 2000 she has followed Westward’s heritage of racing, however, this will be Eleonora's first RORC Caribbean 600.
"It is an event that the crew have been looking forward to ever since it was decided to enter," explains Brendan McCoy, Captain of Eleonora. "Adela has shown formidable speed in the Caribbean 600 and she has an advantage over us in waterline length and sail area, so it will be against the odds to beat her over the water. On IRC rating, we just don't know how we will fair and the conditions will play a big part. However, it will be an achievement to sail Eleonora well around the course. There are so many manoeuvres; it will be a real challenge for the crew and that is what we are looking forward to. For the race, we will have members from the Royal Yacht Squadron and the Royal Ocean Racing Club on board and we are keen to ensure they all have a memorable race."

Classic yachts have always been a part of the RORC Caribbean 600. Competing this year is the 78ft Maxi Kialoa III, best remembered for victory in the 1975 Sydney Hobart, with the race record lasting for 21 years. The 70ft mahogany ketch, El Oro which was originally owned by the founder of Bic pens has been sailed from Australia to compete. Mat Barker's 65ft sloop, The Blue Peter has unfinished business after retiring from last year's race. The Blue Peter is a true classic, almost unchanged since being launched in 1929.

The 9th edition of the RORC Caribbean 600 will start from Antigua on February 20th 2017 and in excess of 70 yachts are expected, with over 900 sailors from 24 different countries taking part.