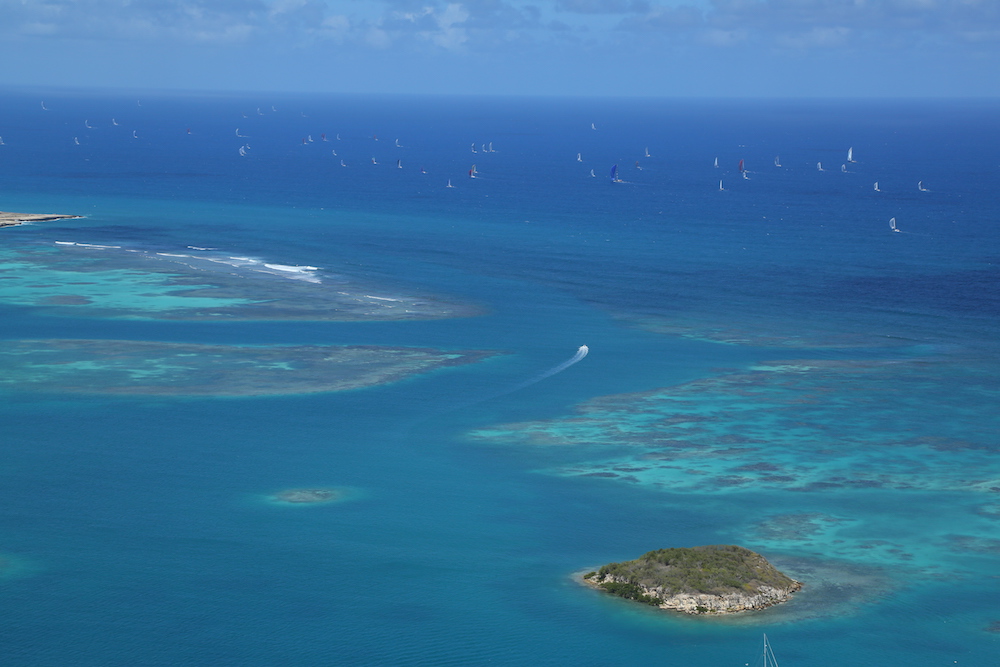 The Magic Carpet Ride - The Start of the RORC Caribbean 600

The 8th edition of the RORC Caribbean 600 started in spectacular style with the record 70 yacht fleet gathering in the starting area outside English Harbour, Antigua. Under the Pillars of Hercules, the magnificent collection of yachts started the 600 nmile race in a sublime 14 knot south-easterly breeze with brilliant sunshine. The conditions were enough to have the fleet fully ramped up and a not insignificant swell added to the excitement. Five highly competitive starts thrilled hundreds of spectators lining the cliffs at Shirley Heights and Fort Charlotte. Not only was this a record fleet for the RORC Caribbean 600, it was undoubtedly the highest quality of participants since the inaugural race in 2009.

CSA, IRC 2 & IRC 3 Start
24 yachts engaged in a pre-start peloton resulting in a tremendous battle for the line. The all-girl Sirens' Tigress; IRC 2 champion, Scarlet Oyster and Polish team, Por Favor executed text book starts. However, winning the pin was American Swan 48, Isbjorn. Jua Kali also got away well which was marvellous for the British team who badly damaged their rig in the Atlantic en route to the start. 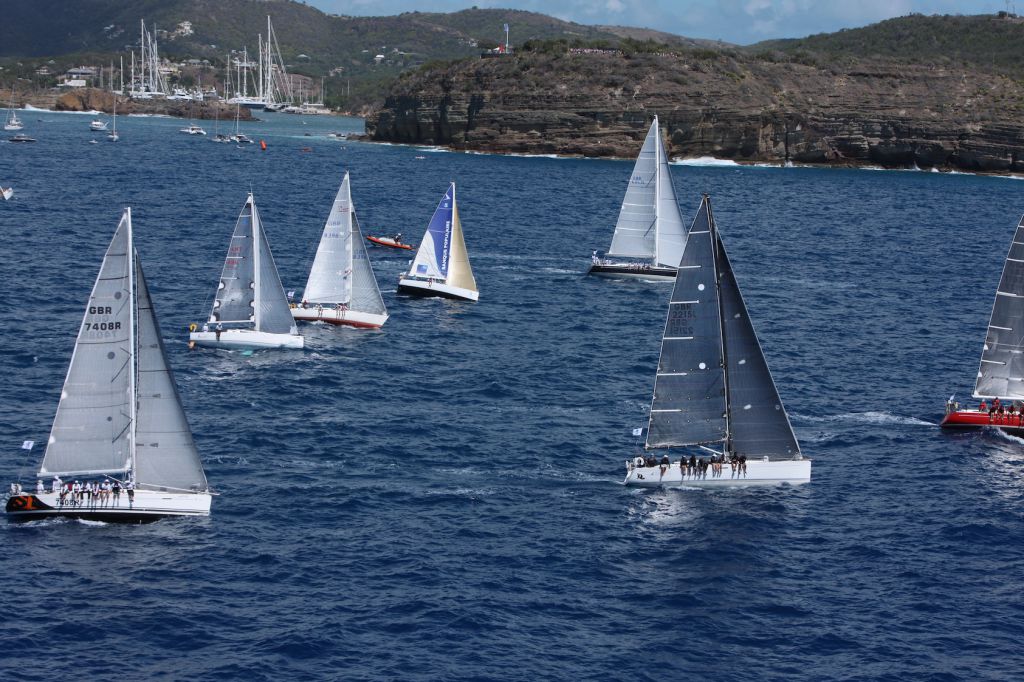 IRC 1 & CLASS40
17 yachts started the race with American Sydney 43, Christopher Dragon winning the pin ahead of Canadian Farr 45, Spitfire. Spanish Tales II was the first Class40 to cross the line with Antiguan entry Taz also starting well. Belladonna, skippered by RORC Admiral, Andrew McIrvine had a great start controlling the favoured coastal side of the course. 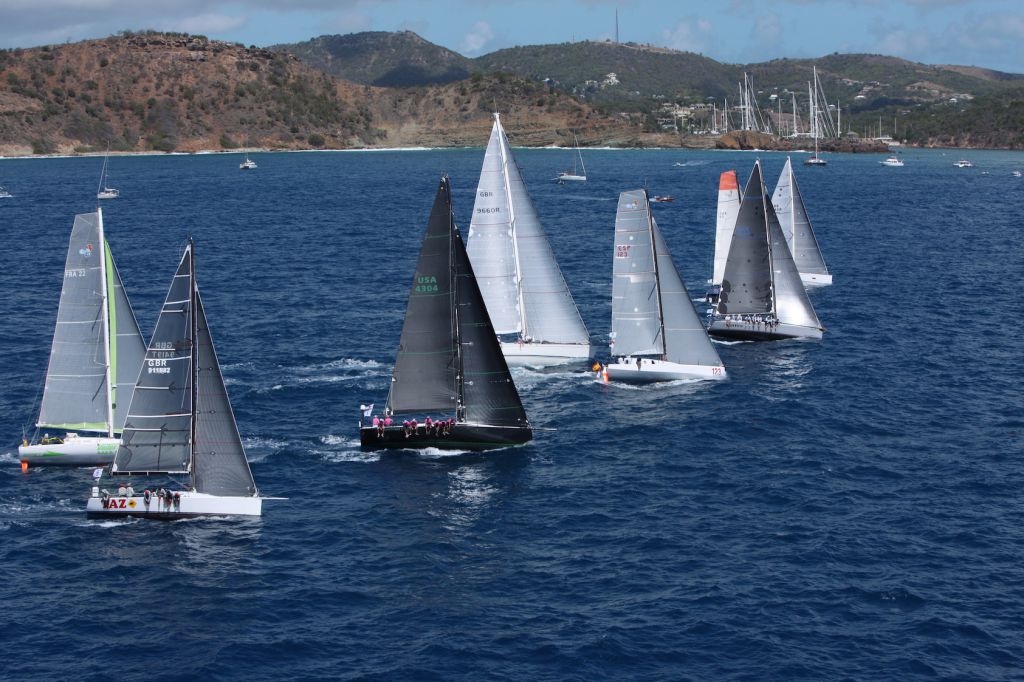 IRC 1 and Class40 fleet at the start of the 8th RORC Caribbean 600 Race  - Credit: RORC/Tim Wright

IRC Zero & IRC Canting Keel
The most impressive start in the eight-year history of the race featured 23 head-turning yachts. 115ft Baltic, Nikata tried to use her might to win the pin but encountered severe congestion, forcing the superyacht to round the wrong side of the pin. Lithuanian Volvo 60, Ambersail were overeager and with no room to bear away, sailed around the pin end buoy. Irish Cookson 50, Lee Overlay Partners was adjudged OCS and had to restart. Dutch Ker 51, Tonnerre 4 with octogenarian owner Piet Vroon on board had a cracking start, as did Hap Fauth's Maxi72, Bella Mente going for speed and heading for the lift off the cliffs. Jim Clark and Kristy Hinze Clark's, 100ft Maxi had a slightly conservative run-up to the line before the big winches growled in a dial-down and Comanche powered up, accelerating into the lead. 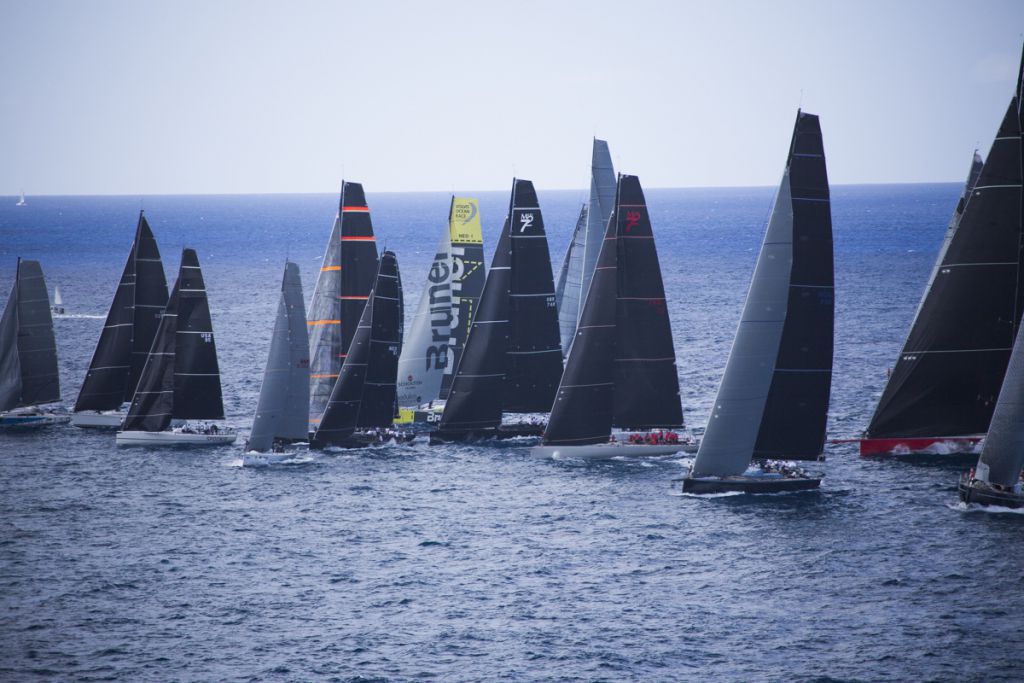 The IRC Zero and IRC Canting Keel fleet made an impression at the start of the RORC Caribbean 600 - Credit: RORC/Emma Louise Wyn Jones

Superyacht
The penultimate start featured two of the largest yachts competing in the RORC Caribbean 600. Southernwind 102 Farfalla executed a text book start to begin the 600-nmile race, assisted by a crew including Steve Hayles as navigator, winner of the race with Niklas Zennstrom's RAN in 2012. The magnificent sight of 178ft schooner Adix crossing the line under full sail drew gasps from the crowd ashore. Adix is the first three-masted schooner to take part in the race. 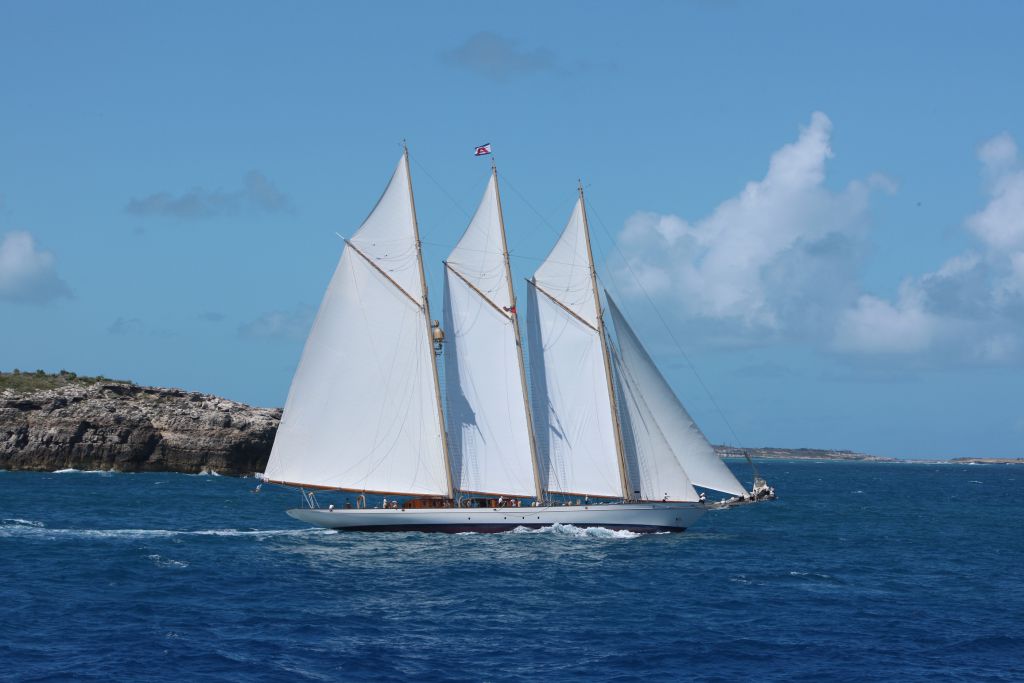 MOCRA Multihull
Six Multihulls including MOD70s Phaedo3 & Concise 10 lined up for the last start of the day. Phaedo3 and Concise 10 locked horns in the pre-start as expected, with Phaedo3 co-skippered by Lloyd Thornburg and Brian Thompson gaining a small but significant advantage at the start. Concise 10 had to tack offshore to escape bad air and ploughed through several spectator boats that had gathered close to the exclusion zone. The two MOD70s are expected to have a titanic battle over the next two days. Belgian Zed 6 reported a broken daggerboard before the start but managed a repair in time to begin the race.

With a south-easterly breeze the fleet took a long starboard tack to Green Island where they bore away for Barbuda hoisting downwind sails. The sleigh ride has already begun for Comanche, Phaedo3 and Concise 10 with the YB tracker already showing the trio hitting close to 30 knots of boat speed. The wind is expected to return to the east before morning and freshen to a possible 20 knots when many more of this magnificent fleet will be enjoying the magic carpet ride of strong trade winds. 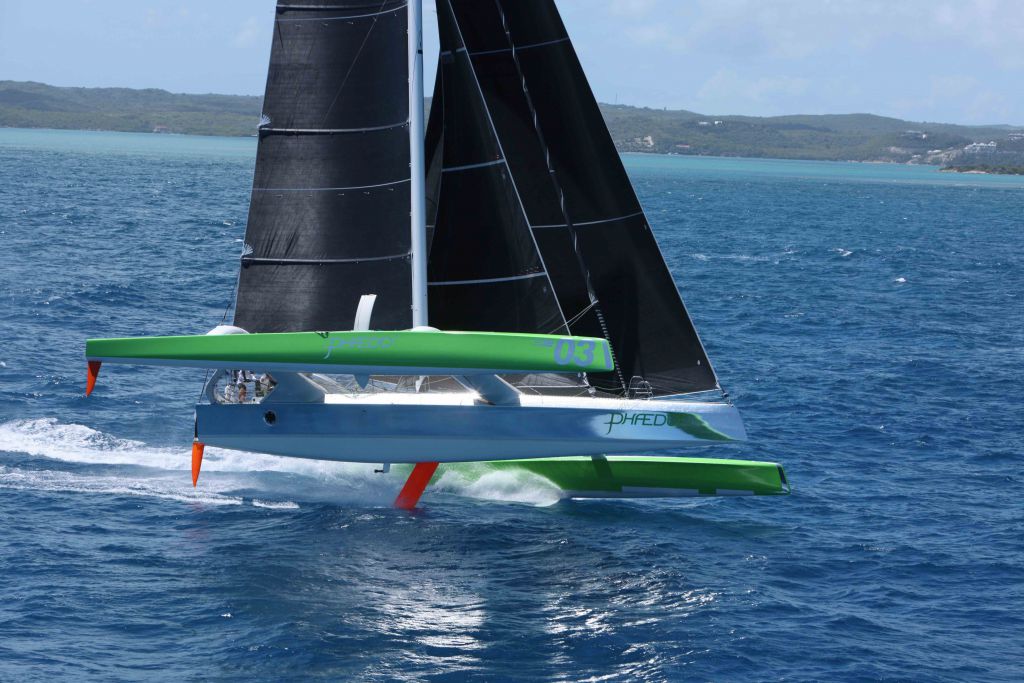 Watching the start from the cliffs at Shirley Heights was RORC Chief Executive Eddie Warden Owen who could not help but marvel at the quality of the fleet: “This is an amazing collection of boats sailed by the best offshore sailors in the world and was shown by the intensity of the start. Each fleet battled for the outer favoured end of the line, caused by the wind being south of its normal easterly direction. No one held back,” said Warden Owen “And I am surprised we only had one boat over the line at the start. The lighter wind increasing as the week goes on, could favour a small boat for an overall win under the IRC rating rule. It will be fun to watch, but I’d much prefer to be out there racing.” 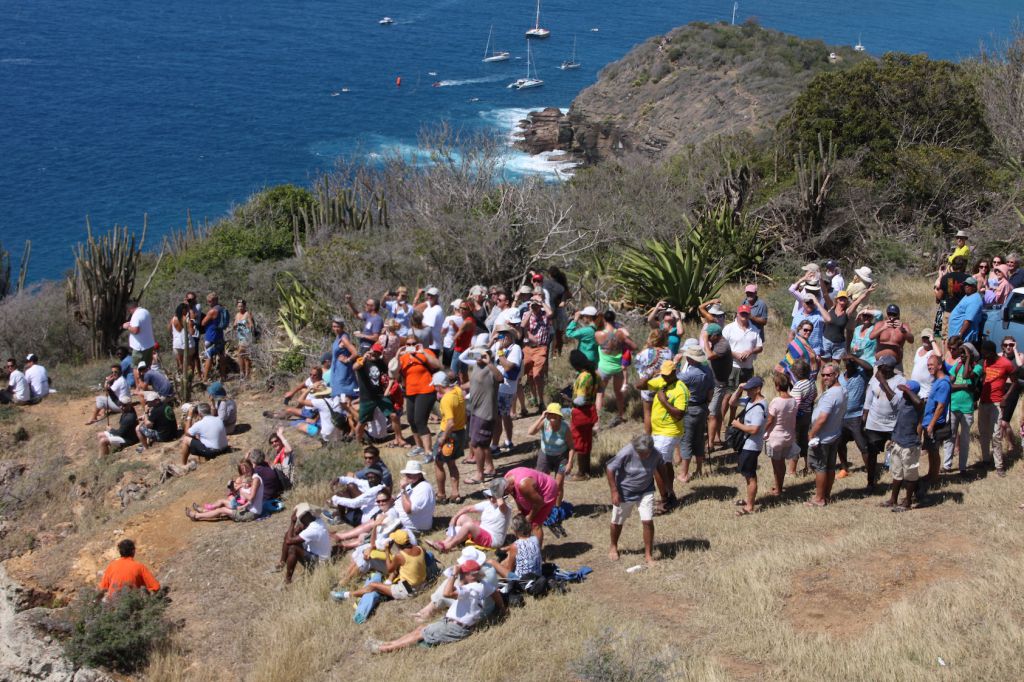 Hundreds of spectators watched the start of the 8th RORC Caribbean 600 from ashore and on the water Credit: RORC/Tim Wright