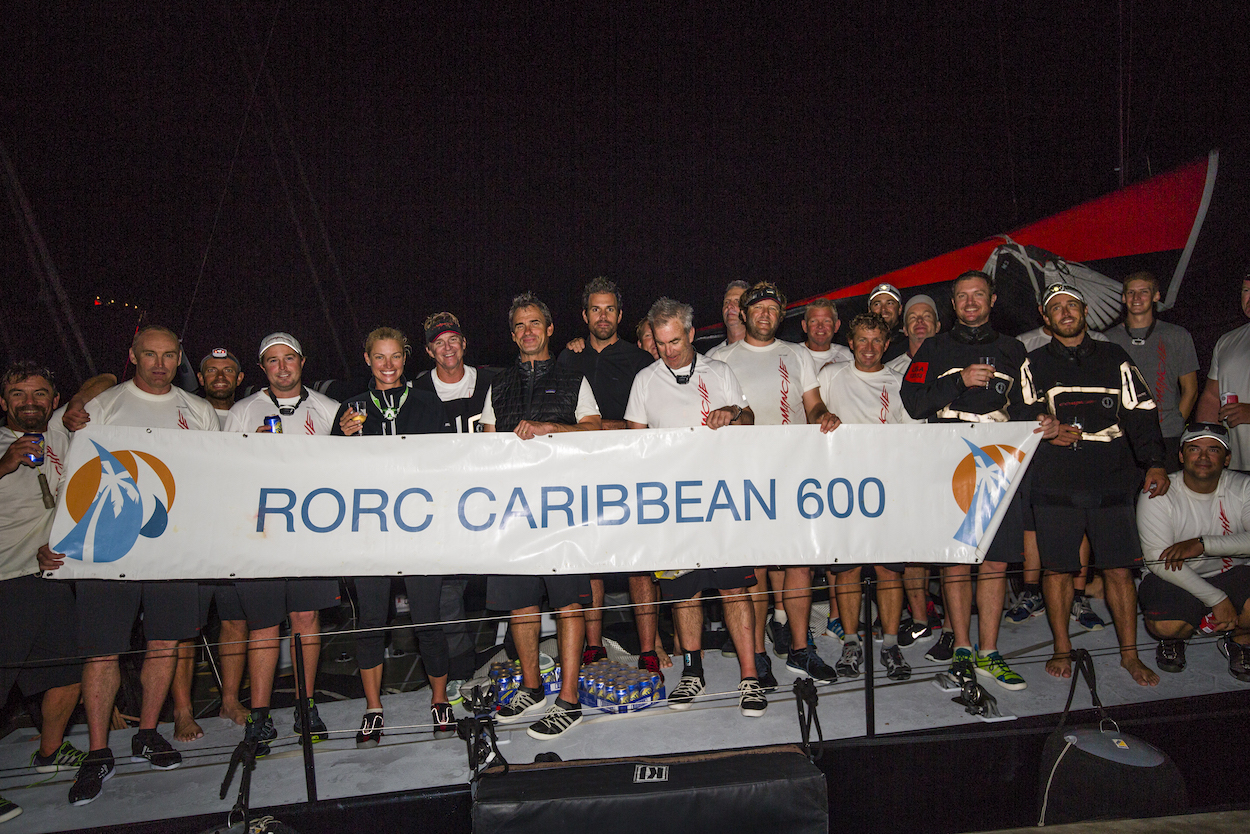 Jim Clark & Kristy Hinze Clark's American VPLP-Verdier 100 Comanche crossed the finish line of the RORC Caribbean 600 at 03.45 on Wednesday morning with an elapsed time of 40 Hours 53 Minutes 2 Seconds taking monohull line honours for the race, and only 33 minutes outside the record time set by George David's Rambler 100 in 2011.

Comanche Skipper, Ken Read: “Comanche is built to come in first to finish and when Mother Nature co-operates we have the pedigree to break records,” was Ken Read’s reaction to the wind coming from the south-east, making the leg from St Marten to Guadeloupe a beat, which for previous record holder - Rambler 100, was a fast fetch. “Going around these islands is a ball; whales breaching, volcanoes smoking, it doesn't get any better than that. We will be back, I promise you – this is a great race.” 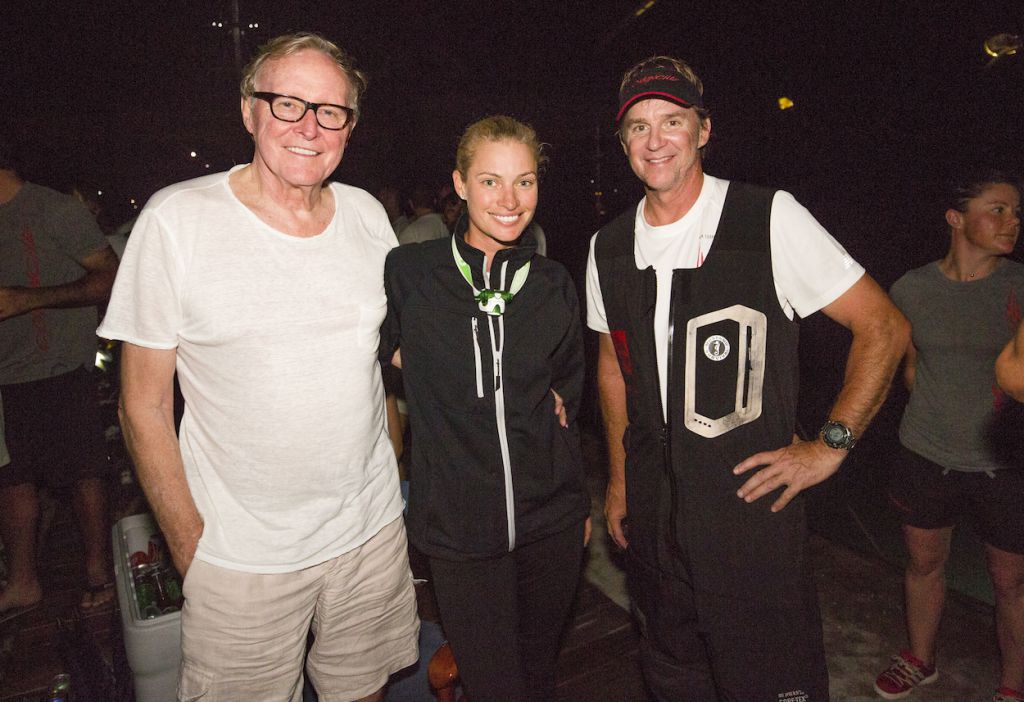 Owner of Comanche, Jim Clark: “The Comanche crew is a group of people that work really well together; it might as well be a family. Teams are really important; you have to get along and know as second nature what the other team members are doing. In the hi-tech world, one major similarity with yacht racing is 'the team'. A corporation has to have a strong team too, especially a start-up. I have been involved with a number of start-ups with 20 or so people like Comanche and you need smart, dedicated people to make it work, that is one of the basics.

Owner of Comanche Kristy Hinze Clark: “The water and the islands are so beautiful and with a full moon the night time sailing was just spectacular, which was very different from my first experience in the Sydney to Hobart. The crew are great at communicating and they are an exceptional group of professionals. To be able to experience that at first hand during offshore races has been a real pleasure and an honour. I am mildly (sic) competitive and that atmosphere is one that I really enjoy. This boat is like nothing else; Comanche has so much power and speed, it is the coolest thing! I would say to all the girls out there, if this is something you are interested in – do it, chase your dreams.” 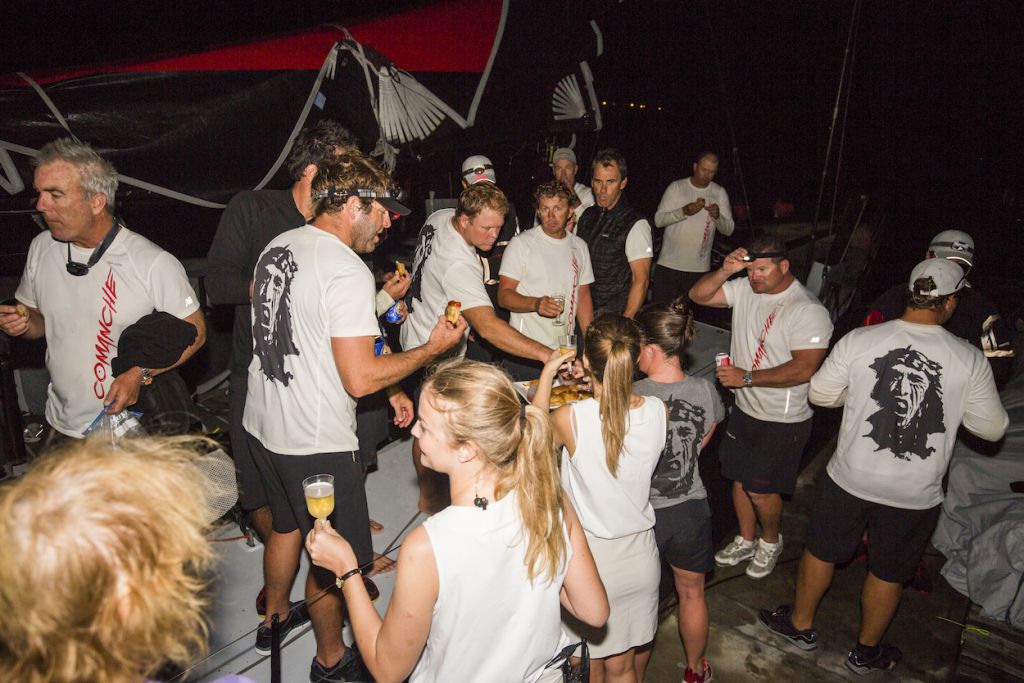 As Comanche celebrated their Line Honours victory, there was huge relief as Hap Fauth's American Maxi72, Bella Mente safely moored up in Falmouth Harbour having retired from the race. Bella Mente's crew were deeply disappointed but all concerned were thankful that the crew were safely ashore.

Bella Mente afterguard Terry Hutchinson commented: “We are not really sure what happened. We were beating up to La Desirade, tacking up the shoreline and we heard a loud ping from down below, from inside the boat. It was really rough and we didn't think much of it because you occasionally do hear random noises from these kind of boats. We got around the corner, set the Mast Head Zero and we were off doing 26 knots with Adrian Stead on the helm, coming into Proteus who had got around us in the wind shadow of Guadeloupe. As we accelerated we could feel the fin pitching back and forth. It felt like the boat was going one way and the fin another; that is speculation but it didn't feel right. It felt very unnatural, so we slowed down. Moose (Mike Sanderson) said: ‘Did everybody feel that?’ We tried to arc it back up again and the motion was very noticeable; it felt like the fin was going to drop out of the boat. The correct thing to do at that point was stop and high-tail it for Antigua. It's frustrating because throughout the race we had always kept ourselves in the hunt and we always knew that if we were in the hunt at that quarter, we could finish the race well, so it is frustrating. Up until then it had been an awesome race.” 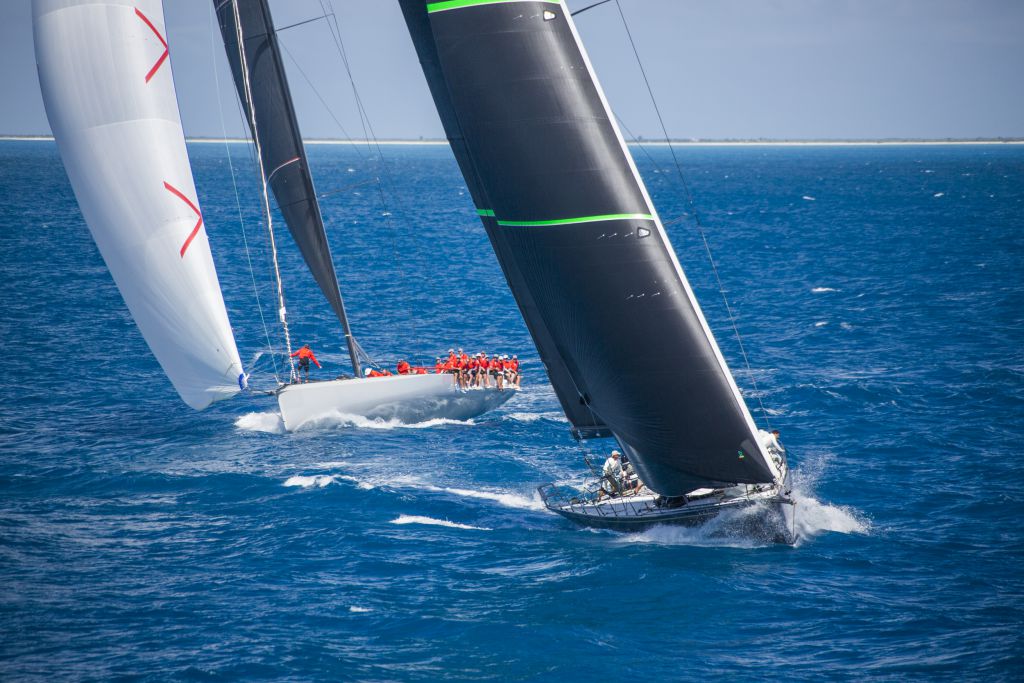 George Sakellaris' Maxi72, Proteus is due to be the next yacht to finish and is currently the provisional overall handicap leader. A number of competing yachts expected over the next 24 hours. Including Bella Mente, five yachts have now retired from the race; Jonty Layfield's Sleeper  11, Riccardo Pavoncelli's Rosalba, David Ballantyne's Jings and Irvine Laidlaw's Highland Fling XI. All crew are safely ashore with no reports of any injuries.