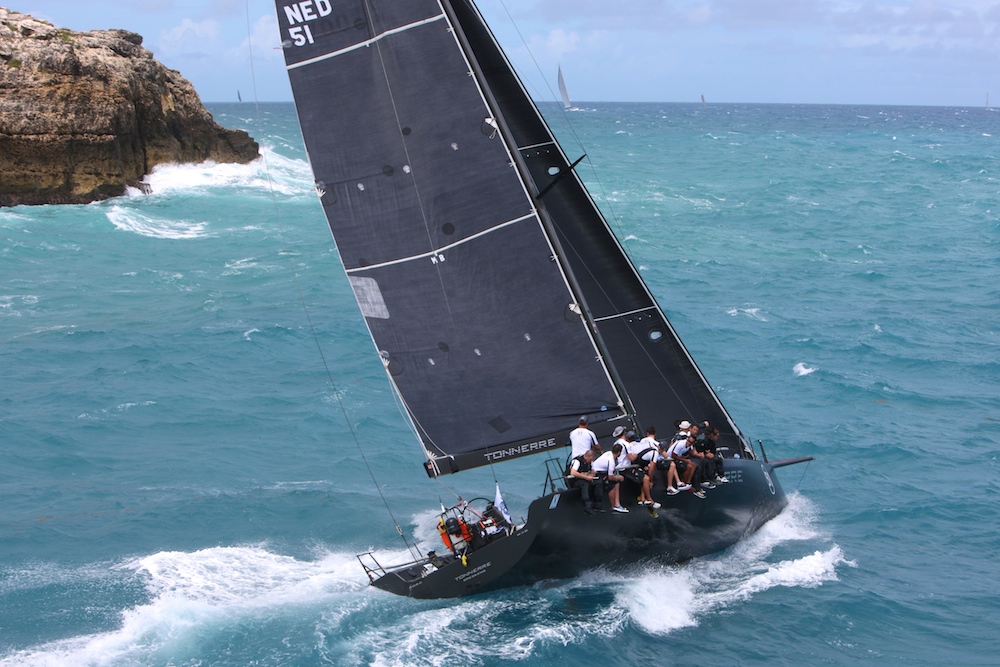 “The RORC have decided that the tracker player will be switched off so that yachts cannot see how the competition negotiate the tricky wind shadow behind Guadeloupe,” commented Ian Moore. “The wind is forecast to decrease in strength and shift to the south, just as Bella Mente arrives at the 'twilight zone'. We have been runner-up twice in this race and how well we handle the wind shadow may well decide our overall performance in the race.” 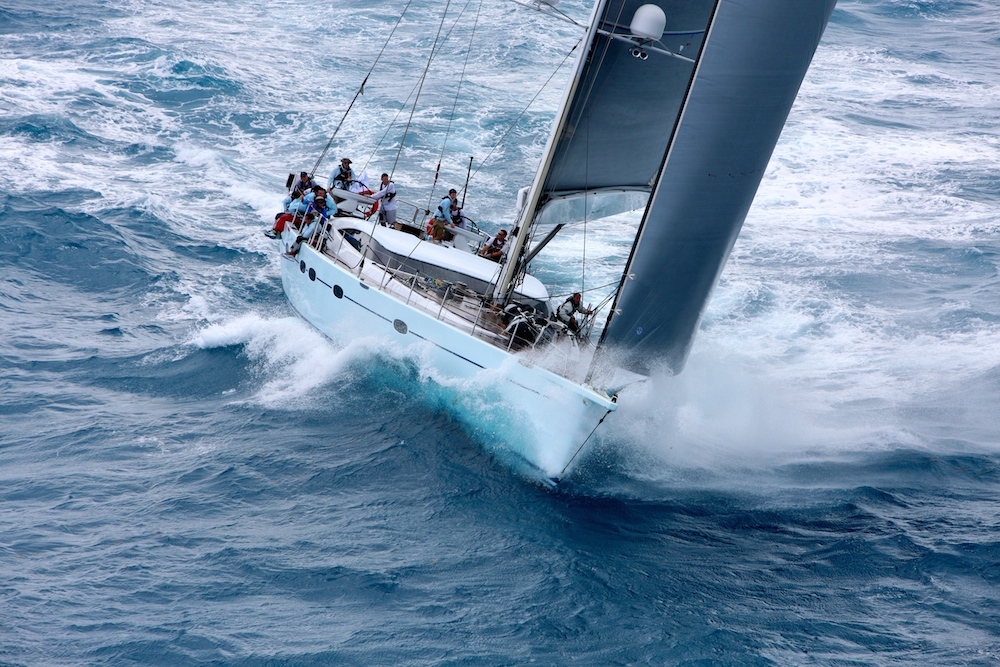 Piet Vroon's Ker 51, Tonnerre 4 is having a full-on battle with Peter Harrison's TP52, Sorcha for IRC Zero and third overall. At 0600 this morning just one mile, or six minutes after time correction, was the separation. The two all-carbon fibre flyers are revelling in a high speed showdown relying on muscle power and shrewd tactics alone. Tonnerre 4's Frank Gerber sent in this message by satellite link:

“Eyes stinging from the salt water firehouse, so excuse the poor spelling. Hard work so far, we have lost count of the sail changes but the boys are joking and smiling. Just passed St.Barths and we are still reeling from the adrenalin of the first leg to the laid mark where Paul Wilcox clocked 25 knots with the FR0 (fractional code 0), a wild wet ride.” 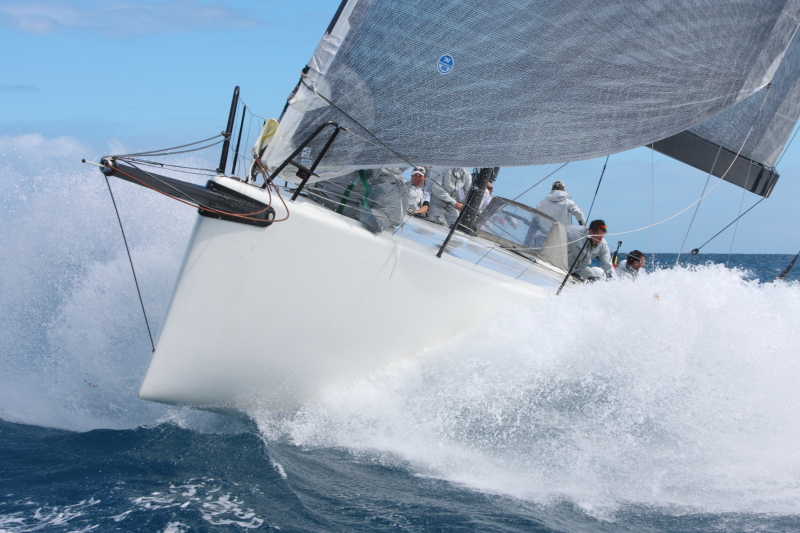 At 0600 on Day Two, IRC One featured several yachts enjoying a close battle. After time correction James Blakemore's South African crew racing Swan 53, Music was leading the class with William Coates’ Texan Ker 43, Otra Vez in second and Oyster 625 Lady Mariposa, sailed by Daniel Hardy, third. In IRC Two, two old friends are duking it out at the top of the leaderboard. Ross Applebey's Oyster 48, Scarlet Oyster and Andy Middleton's First 47.7, EH01 were recording the same average speed and the same distance to finish, heading to the northern most part of the course.

“We had a great start mid line going over the line within seconds of the gun," commented Lucy Reynolds. "Scarlet Oyster were to our leeward and EHO1 were to windward of us and I was happy we had a clear lane and didn't get stuck in the dirty air of other yachts. We tacked half a dozen times to stay close to the shore out of the stronger current and to get any lifts that were coming around the headlands. At Green Island, the bigger yachts ahead disappeared but it wasn't just due to boat speed, a ferocious squall with rain like daggers pelted the crew and the boat but soon we had dried out, blasting towards Barbuda with our two rail hissing in the blue water. Before sunset we bore away around the Barbuda mark eased the sheets and got ready to peel to the running Asymmetric spinnaker. All manoeuvres complete, I have headed to my bunk to get some rest before we get to Nevis.” 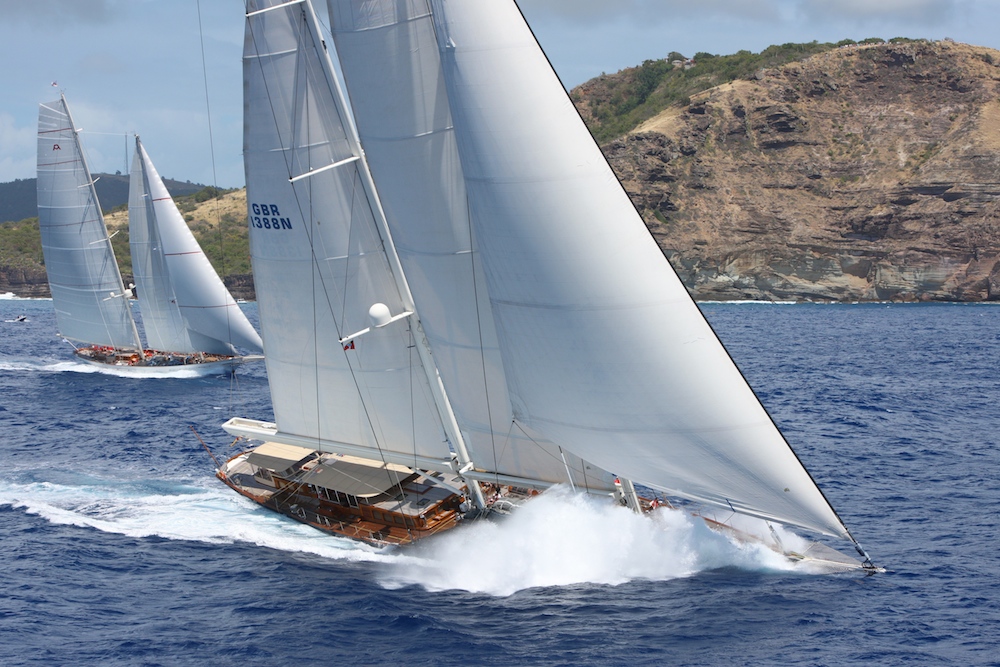 At dawn, the two gigantic schooners racing in the Superyacht Class are approaching a fascinating part of the course. Adela and Athos are side-by-side entering the Anguilla Channel. The crews of both yachts will be getting fully stuck into some major physical activity as the two yachts enjoy a 'pistols at dawn', multiple tacking duel. It takes 35 crew to race Athos and 34 to race Adela and while there is no doubt the two teams are great friends, the rivalry between them is extreme and no quarter will given or taken. Adela leads on IRC handicap but this fight is all about the first boat to finish and Skippers Greg Norwood-Perkins (Adela) and Antony Brookes (Athos) want that barrel of English Harbour Rum to give to their crew back in Antigua.