With 65 entries, a record entry for the sixth RORC Caribbean 600 is a certainty and right through the fleet the quality and character of the yachts and sailors is strong and deep. The Royal Ocean Racing Club was founded to encourage long distance yacht racing across a broad spectrum and the RORC Caribbean 600 is a fine example of that ethos. 32 different makes of yacht, flying the flags of 11 different countries, will be crewed by passionate amateurs and world famous sailors.

George David's Maxi, Rambler 90, is the main contender to take the first gun at Fort Charlotte. Rambler 90 is well designed for the twists and turns around the course and very fast at every point of sail. Rambler's crew is exceptionally talented and includes Peter Isler, Jerry and Rome Kirby, Brad Jackson and Jan Dekker - and this is just mentioning the winners of the America's Cup and Volvo Ocean Race! All of the crew have amazing talent and Rambler has two powerhouses in the shape of Joe Fanelli and Nathan Hislop, two of sailing's strongest men.

Bertrand De Broc's IMOCA 60, VNAM, is another hot contender for line honours. Last year, De Broc competed in both the Vendée Globe (9th) and Transat Jacques Vabre (6th). The French skipper has also excelled in shorter offshore races with 13 Solitaire du Figaro and 8 Tour de France à la Voile, winning the race around France twice. VNAM will be surfing off the wind in big breeze - the light displacement 2007 Finot Conq design is capable of demolishing the course and the opposition.

In 2013, of all the major offshore races, only the record breaking entry for the Rolex Fastnet Race had a bigger IRC Zero class than this year's RORC Caribbean 600.

The variety of yachts racing in IRC Zero is as astounding as the quantity. Rambler is the scratch boat, but two racing Mini Maxis can be counted as class favourites. Hap Fauth's JV72, Bella Mente, returns with an all-star crew including Mike Sanderson, John Cutler and Terry Hutchinson in the afterguard. In 2013 Bella Mente was becalmed in the wind shadow of Guadeloupe and rumour has it that the team have been gathering data at the approximate time of their arrival this year, to try to avoid the same trap. George Sakellaris' RP72, Shockwave, will compete for the first time with Richard Bouzaid, Mark Mendleblatt and Robbie Doyle as part of a formidable crew list. A sensational Mini Maxi duel is most definitely on the cards.

Of the many high performance cruisers racing in IRC Zero, Southern Wind 100 Cape Arrow, sailed by Fabrizio Oddone, and Anders Nordquist's Swan 90, Nefertiti, represent elegant entries for this year's race. RORC member, John Burnie, has competed in every race and still holds the multihull record. This year John will skipper 94' Frers, Bristolian, and will be flying the blue ensign as RORC Admiral Andrew McIrvine will be on board, taking part in his fifth race.

Noteworthy yachts in IRC Zero include Johnny Vincent's TP52, Pace, which has been specially shipped out for the race and bristling with talent. Volvo Ocean Race winner Jules Salter joins Kelvin Harrap and Jeremy Robinson in the afterguard. Maximillian Klink's Botin IRC 65, Caro, took line honours in the Atlantic Rally for Cruisers (ARC) to get to the Caribbean and boasts a crew of seven Volvo Ocean Race sailors: Stu Bannatyne, Ryan Godfrey, Mark Bartlett, Jono Swain, Tom Addis, Justin Ferris and Michael Muller. The brand new Carkeek 47, Grundoom, owned by James Grundy is also entered and will have yacht designer Shaun Karkeek on board along with prolific light displacement legends: Dee Smith and Steve Benjamin.

The mighty schooners Athos and Adela will continue their gentlemen's duel. Dykstra designed Adela is the smaller of the two magnificent yachts at 182ft and over 200 tons! The sails and systems on board Adela are extremely advanced, however manoeuvres require up to 30 crew to perfect. Adela's 'Big Red' masthead spinnaker is over 1000 sq.m. Athos is the largest yacht competing this year; the 203ft Hoek designed schooner weighs 370 tons and the rig is over 200ft high. Athos can hoist over 3000 sq.m of sail area downwind.

Piet Vroon's Ker 46, Tonnerre de Breskens, returns for another crack at the RORC Caribbean 600. Last year the Dutch flyer was leading the race on time correction before the wind trap at Guadeloupe dashed their hopes. Colin Buffin's Uxorious IV returns for the third attempt and the British Swan 62 has been class runner-up on two occasions. Last year's IRC Three winner, Jonty Layfield, returns with a brand new boat. The Azuree 46, Sleeper, will include highly experienced crew including one of Antigua's best young Laser sailors, Sean Malone.

Race boat charter has become very popular in RORC racing in general and IRC Two is almost entirely composed of well prepared charter yachts that offer single berths, or the entire yacht, to paying clients. This is probably the most competitive class in the race and, with a number of yachts all capable of the same speed around the 600 mile course, close boat-on-boat action is a likely scenario. Former RORC Commodore Peter Rutter's Grand Soleil 43, Trustmarque Quokka 8, can be counted as one of the favourites. Quokka has been charted to Bernie Evan Wong to compete in his sixth race. A highly accomplished crew includes Phillippe Falle, Dana Nicholson and RORC Vice Commodore Michael Boyd. Peter Sowery will skipper First 40, Lancelot II. Peter is a passionate amateur sailor but Alex Thomson, third in the last Vendée Globe, will bring a professional approach that must make Lancelot II contenders for the class. First 40, Southern Child, has been chartered by the Royal Armoured Corps Yacht Club, the British Army team is led by Paul Macro.

The smaller yachts in the race will have some fascinating duels; these crews will spend longer at sea than the faster boats which may be more tiring but the sailors will get a lot more Caribbean racing in! Yuri Fadeev's Reflex 38, Intuition, is the scratch boat in IRC Three and Fadeev has raced more RORC miles than most. Last year Intuition competed in seven RORC races, including the Rolex Fastnet Race and the Rolex Middle Sea Race, finishing a credible sixth in class for the RORC IRC Season's Points Championship. Girls 4 Sail, racing First 40.7 Hot Stuff, will be skippered by Nicola Henderson. The all-girl crew are a familiar team on the Caribbean inshore circuit but this will be their debut in the RORC Caribbean 600. RORC Committee Member Adrian Lower returns to the RORC Caribbean 600 with Swan 44, Selene. Adrian is a highly experienced sailor having competed in numerous Fastnets and the 2010 Sevenstar Round Britain & Ireland Race; this will be Selene's second RORC Caribbean 600.

Two true classic yachts will enjoy a private duel. Built in 1929 by Olin Stephens, the 52ft ketch Dorade won the 1931 Transatlantic Race and the Fastnet. Now lovingly restored to all her glory Dorade won the 2013 Transpac overall. Carlo Falcone's Alfred Mylne-designed Mariella, built in 1938, will be a fine opponent for Dorade after time correction. Mariella has won the St.Barth's Bucket and Antigua Classic Regatta. Both of these yachts will be making their first appearance in the RORC Caribbean 600.

Four Class40 pocket rockets are entered for the race, although Willy Baissante's Tradition Guadeloupe has elected to sail under IRC Two Handed. Gonzalo Botin Sanz de Sautuola's Tales II will start as favourite for the Class40 division, having come runner-up in the Transat Jacques Vabre. Last year's Class40 winner and course record holder, Peter Harding's 40 Degrees, is also hoping to join the party. The crew are sailing the boat up from Brazil with an ETA just before the start and everybody in Antigua is wishing them good speed! Several more entries are also expected from Guadeloupe.

Sadly, Ross Applebey's Scarlet Logic was dismasted recently in Antigua. All of the crew escaped serious injury and Ross and co-skipper Tim Thubron are trying everything possible to get Scarlet Logic back in the race. 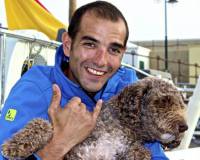 The RORC Caribbean 600 always has a fun element to it and this year the first dog may take part in the race - Duna, on board Spanish entry, Ocean Phoenix. Animal lovers need not be alarmed, Duna crossed the Atlantic on board Ocean Phoenix and has two stout pairs of sea-legs to go with his own personal safety equipment!

The 6th edition of the RORC Caribbean 600 is scheduled to start at 1100 local time 24th February. All of the fleet will be fitted with Yellowbrick Trackers and email, pictures and video from the yachts will create a vivid story of the race, as the drama unfolds.