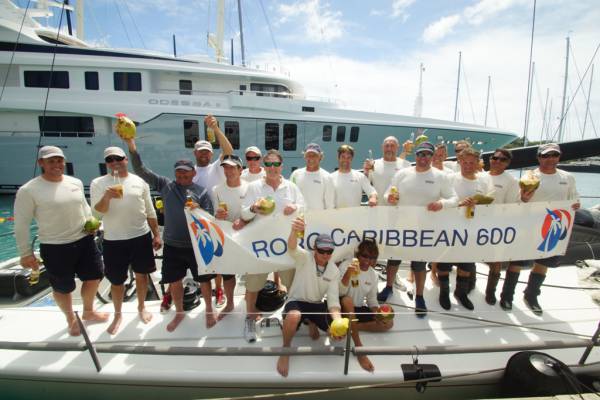 The last start of the day produced the hair-raising sight of two enormous schooners match racing each other in the last few minutes to the start, bearing down towards the Pillars of Hercules at full speed, only a boat length apart. The 182ft Adela called for water from 203ft Athos, which duly obliged, putting in a smart tack, and all 300 tons of her went through the wind. The spritely 200 ton Adela smoked through the line with height and pace to effectively win the start - magnificent!

The breath-taking course around 11 Caribbean islands provided a thrilling race track, with close racing right through the fleet, especially the battle for line honours.

The closest finish for line honours in the six year history of the RORC Caribbean 600 played out on the last leg of the course. Hap Fauth's JV72, Bella Mente, George David's RP90, Rambler, and George Sakellaris' RP72, Shockwave, were approaching Redonda, the last island of the course, in fighter formation, readying themselves for a battle royale. The adrenalin levels of the crew were peaking, but a cold beat on the rail awaited them back to the finish in Antigua. After an incredibly demanding 40 hours of non-stop action, the teams were exhausted but digging deep to summon the energy for a last push to victory.

"That is what ocean racing should be all about," commented Shockwave tactician, Robbie Doyle. "Beautiful racing between three very tough competitors, all fighting it out the whole way. A heavy-weight battle without a doubt - no question. I have had great moments in sail boats, but that was as much fun as I can remember. For 600 miles we were always in touch with each other, either up a few minutes or down a few minutes, and it all came down to the last beat to finish. It was like an epic tennis match."

Erick Clement's Open 40 trimaran, Dauphin Telecom - Johny Be Good, had just three crew and the team from St.Martin had a gruelling race to take line honours and the Multihull class win; the crew had virtually no sleep, a diet of cold pasta and were drenched throughout the 600 mile course. "It was a tough race, especially at night when we really felt the cold. Just finishing the race was our goal but we are delighted to take line honours; every racing multihull in the Caribbean should do this race and we would love to take on boats from overseas as well," commented Erick Clement.

Last year's overall winner, Ron O'Hanley's American Cookson 50, Privateer, won the Canting Keel Class. "This is just a great race; the RORC does a superb job organising it, of making us feel loved. That's why it's my favourite and why I keep coming back. It is my fourth time here and we hope to be back next year."

The magnificent schooners Adela and Athos enjoyed an epic battle; the match racing was incessant with the lead changing hands six times during the race. Adela and Athos were literally metres apart at Redonda where the two leviathans of the race hauled in sheets for the beat to finish. Tack for tack and toe to toe, the battle raged on to the finish. Ultimately Adela won the last leg to take line honours for the Superyacht Class and the win on corrected time. The friendly rivalry was evident on the dock as Adela deployed their loud-hailing system to broadcast three cheers for Athos, which replied with three blasts from their deafening horns.

Greg Perkins, skipper of Adela, was full of praise for his crew and Athos. "An amazing race; Athos is quicker off the wind than us, but we're quicker upwind so we passed each other at each mark. Going round Redonda, they were within two boat lengths of us and then we managed to pull away on the last leg. Hats off to Athos, they are getting faster and faster and I don't know if we can keep up with them in the future. I think they sailed really well which made it an amazing experience - two schooners match racing around 600 miles in the Caribbean - you can't ask for much more than that. I'm very proud of the boys who did a fantastic job; the crew work was flawless. I've had this team together for quite some time, which makes such a difference. The important thing when manoeuvring a boat like Adela with two headsails, two mainsails and runners on each of the masts is coordination; it's such a powerful beast."

Piet Vroon's Dutch Ker 46, Tonnerre de Breskens 3, took line honours and the win in IRC One. Piet is extremely agile for a man in his eighties, and nimbly jumped over the transom of Tonnerre to enjoy a beer with the meet and greet volunteer team in the small hours of the morning.

"After the North Sea it was warm and fantastic," commented Piet Vroon. "There are very few months where it is actually nice to sail back home so this is perfect, even at night. Tonnerre could hardly have done better; good company, no damage, other than the cooking gas running out - it was a perfect race."

Nine yachts from Nautor's Swan competed in this year's race, another record for the RORC Caribbean 600. The prestigious Swan Challenge Trophy is awarded to the first Swan to finish on corrected time under IRC and was presented to Anders Nordqvist, owner of Swan 90, Nefertiti.

Carlo Falcone's 79ft Yawl Mariella, designed in 1936 by Alfred Mylne, entered the race for the first time and decided to put up the Mariella Cup for classic yachts that enter the race. The Italian skipper, flying the Antiguan flag, duly won his own trophy, which was received by the owner's daughter, Shirley Falcone.

For the second year in a row, the Class40 record for the RORC Caribbean 600 was bettered. Gonzalo Botin's Tales II showed amazing speed around the course, breaking the 2013 course record set by Peter Harding and Hannah Jenner's 40 Degrees. The Spanish entry was over three hours quicker than the previous record, finishing the 600 mile race in an elapsed time of 2 days, 16 hours 37 minutes 52 seconds.

Antiguan dentist, Bernie Evan Wong said he would be back for his 6th RORC Caribbean 600 with a bigger, faster boat and the Grand Soleil 43, Quokka 8, delivered, taking line honours in IRC Two. It is the first time in the six year history of the race that an Antiguan skippered yacht has taken line honours in any class. However, Peter Sowrey's First 40, Lancelot II, with Vendee Globe sailor Alex Thomson on board, put in a gutsy performance to win IRC Two after time correction. "It is a long time since I have raced a boat like Lancelot and this race is hard work, definitely more knackering than an Open 60 and the crew were amazing, a great bunch with talent and enthusiasm," commented Alex Thomson dockside.

In IRC Three, Yuri Fadeev's Reflex 38, Intuition, was the first yacht to finish. However, after time correction, Matt Brooks' Classic Dorade was the winner. Hannah Jenner blogged about the experience on board the S&S 52 yawl.

"Although this may sound bizarre, it takes a while to get used to the quiet down below. Most of us come from carbon boat backgrounds and are used to the cacophony of noise that reverberates around the hull as you race. Whilst this may not sound pleasant, once you are used to it, the noise lets you know exactly what is happening with the boat. On Dorade there is no chattering over waves, no highly loaded winches screeching as lines are eased, and no slamming on trade wind driven seas. Instead there is the creaking sound of the wooden interior as it twists with the motion of the boat and a gentle sound of water rushing by. Sleep therefore is deep."

TP52, Pace, was third overall and its owner/driver, Johnny Vincent, was taking part in his first RORC Caribbean 600. "Wow, what an awesome race," commented Johnny. "RORC have invented a truly outstanding event and I firmly believe it will be regarded as one of the must do classic races very soon, perhaps it already is. It's like a giant Cowes week course, effectively round the cans but on a grand scale, in the sunshine with warming Antiguan hospitality, many smiling faces, all this in the best sailing waters in the world, surely a formula for success.

I have taken part in many regattas and events, I have tried to maintain a very simple philosophy, to sail with a great team of people who create that all important team spirit aboard and to try to win the event we are participating in. The RORC Caribbean 600 has changed something in me. This race is so completely inspiring that I found the thrill of taking part enough, testament I think of the race's pedigree. I have no doubt this event will go from strength to strength. From all of us in team Pace, thank you RORC for a memorable experience."

RORC CEO, Eddie Warden Owen, summed up his thoughts for the RORC Caribbean 600. "This race has grown in stature and it is not just the boats but the number of professional sailors that are here. This gives you an idea of how important it is to win this race. However we've now got more local boats, more boats crossing the Atlantic from Europe and yachts coming down from America. 60 yachts starting the RORC Caribbean 600 - that's pretty impressive for a race that's only six years old."