The RORC Caribbean 600 Trophy is awarded to the best yacht racing in IRC Overall however there are many more glittering prizes to be won right through the fleet.

The elegant silver trophy, with uniquely turned swan neck handles, will be hotly contested for by nine Swans including the 2013 winner, Swan 90, Nefertiti. Todd Stuart's Swan 56, White Rhino is new to the racing scene but the owner and crew have already tasted success by winning their class at last year's Rolex Swan Cup Caribbean. "The 600 was on the 'must do' list right from the start," commented White Rhino boat captain, Collin Marshall. "The boat and the crew are based in Rhode Island, USA, and we will have a great programme of racing this season in the Caribbean. The RORC Caribbean 600 is a great way to kick-off our season." 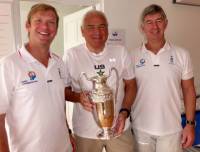 This year a new trophy will be on the stage at the RORC Caribbean 600 Prizegiving. The beautiful sterling silver cup has been donated by Hap Fauth for the first IRC Yacht to finish that is wholly manually powered, without either variable or moveable ballast. The RORC Caribbean 600 is a tough race, especially for yachts that do not use water ballast or power-assisted winches. Hap Fauth commented, on presenting the trophy to the Royal Ocean Racing Club, "Bella Mente will be highly motivated to be the first name on this new trophy. The power reach from St Barths to Guadeloupe requires serious man-power and the numerous sail changes throughout the course make the 600 a real workout."

Awarded to the first Class40 to finish the race in class. Last year Peter Harding and Hannah Jenner, racing 40 Degrees, won the class and broke the course record for a Class40 by over three hours. 40 Degrees is not racing this year, despite a valiant effort to sail up from Brazil, however Hannah Jenner will be competing aboard the classic yacht, Dorade.

The RORC Caribbean 600 Superyacht Class will be a fantastic spectacle throughout the race. 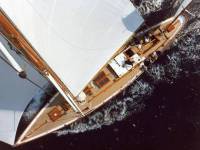 Introduced in 2012,the Superyacht Trophy is a unique antique crystal bowl donated by the Royal Ocean Racing Club. In 2014 the trophy will be a duel between two magnificent schooners; Adela and Athos are both previous competitors which know the course well and will be pushing their behemoths to the limit. This will be a big race for Adela which has won this class every year since 2012 and will be going for a hat-trick. Athos will be as highly motivated as their rivals; they will be dedicating this year's race to the memory of their bowman 'Cappa' Antony Hussey, who was killed in a road accident last year.

Peter Aschenbrenner's Paradox scorched around the track last year, at near record pace, to clinch the multihull prize. This year two yachts from rival French islands, at the extremities of the course, will have a Caribbean duel: Erick Clement's Johnny Be Good, from St.Martin, and Alexis Guillaume's Hallucine, from Guadeloupe.

"We don't know Hallucine's crew but I am sure we will by the end of the race!" Commented Erick Clement. "Hallucine is 10ft longer and has much more in the way of structure. There will be parts of the course that we will be quicker and vice versa, so it should be an interesting contest. We will just have three on board and it will be a tough race, especially upwind in an Open 40 trimaran, but at least we have one hull each!"