Walk the course with John Burnie 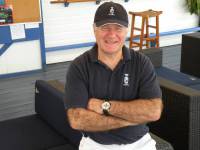 John Burnie has been racing and cruising the Caribbean for decades. A long-standing RORC member, John was on board ORMA 60 Region Guadeloupe, which flew around the course in 40 hours 11 mins 5 secs in 2009 to set the multihull course record, which has stood to this day. There are few people who know the course as well as John especially as he was one of the creators of the first and only Caribbean 600-mile offshore race.

This year, John will be competing on Peter Harrison's Sojana. However John is so enthusiastic about the race that he could not resist offering up some precious tips and tricks about the course:

"An early look at the weather and it looks like we are going to get normal trade wind conditions with a wind direction just slightly north of east, classic '600 conditions provided the weather pattern holds as it is."

"This year, the start line will need to be significantly longer because of the size of the superyachts that have entered. It will be a magnificent sight from Shirley Heights. The yachts will tend to tack as close into the cliffs as they can to get a huge lift off the headland and there is a lot of current inshore. The yachts will want to get out of that adverse current. Once around Shirley Heights a close-fetching yacht can almost lay Green Island in one tack.

The leg up to Barbuda could well be a powerful reach but a good tip is that many yachts tend to over-stand the North Sails mark at Barbuda. After Codrington Point the wind can free off enormously as you run down the side of the island. The wind also tends to accelerate there and it is usually a monster reach-to-reach gybe.

The downwind leg to Nevis is usually not too tactical but it is especially worth looking out for squalls. I remember on Region Guadeloupe we overtook ICAP Leopard there because we got the right side of a squall and they didn't. Significant gains and losses can be made in squalls. Look at the cloud formations as you approach Nevis. If the clouds are moving briskly that is a good sign of breeze, but if they are static the signs are there is a big wind shadow and it is probably best to head further west before turning the corner. In general, the best policy is to stay a bit offshore around the back of Nevis and St.Kitts, then try and lay Saba in one tack. 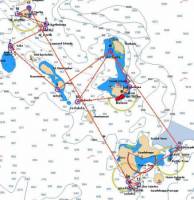 Although Saba is a small island it does have a fairly large wind shadow but it is usually a tough beat afterwards and you would tend to try to keep as much height as possible. The sea state can really pick up there due to a significant current. It is the first real taste of harsh ocean sailing for the crew and yachts. After making St.Maartin there are still 18 miles of short tacking. It is a hard-hitting part of the course, especially at night for the smaller yachts. What's more, there are a lot of rocks that the fleet will need to be especially careful of.

The reach down to Guadeloupe is the first real chance for crews to get their heads down in the race but the start is a significant point tactically, getting the right angle after St.Barths can be crucial. In my opinion, you should stay slightly high on your course, as if the wind does go south of east, you could end up beating. Montserrat is on the layline and there is talk of leaving Montserrat to port, but in my opinion when there are normal trade wind conditions you shouldn't benefit from going west of Montserrat, especially as in doing so you would have to sail a lot more miles and in foul current.

The approach to Guadeloupe is a key area of the race. There is typically a significant wind shadow on the north west corner of Guadeloupe, especially at night. Having said that, during the day you can actually experience a westerly sea breeze there. It is so variable that it is best to look at the clouds over the island and also keep a watchful eye. I always get my binoculars out before approaching Guadeloupe to see how other yachts are sailing up ahead. I have been trapped in an area of no wind, north west of Guadeloupe and watched as 30 knots was blowing through the channel, just two miles away. Many yachts may choose to put someone aloft to take a good look, but a good overall strategy is to stay well off, keep your distance maybe five miles offshore, sail a quarter of the way to Dominica so that you can lay Les Saintes.

Îles des Saintes marks the most southerly point of the course but I would really advocate turning back towards Guadeloupe after rounding Les Saintes, if the wind is in the northeast. Beat back towards Cappisterre but watch out, there are thousands of fishing floats. I wouldn't go in any further than a depth of 50-100 metres. However, there is a massive lift inshore because the wind cascades down to the 'north of Soufriere with the wind going to the south. Once inshore, stay there is my advice, don't go out towards Marie-Galante or you will lose out.

Les Desirade is the most easterly part of the course and that is always a place with a rough sea state. Very confused seas with a lot of current, smaller yachts need to be mindful of the conditions that can be expected. After rounding, the yachts will come off the breeze, a big bare away and another time when crews can get there heads down, as it is 90 miles to Barbuda and there are no real tactics coming into play there, other than avoiding over standing the North Sails mark, which we have already covered.

Barbuda to Redonda is normally a very fast reach with yachts belting along going for line speed. It is worth keeping an eye out for squalls. Redonda is only a small island but it can throw out a significant wind shadow. I have seen races won and lost there so avoiding getting too close to Redonda. After rounding the last island of the course, no messing about, get right on the wind and head for Cades Reef on the north west coast of Antigua. There is a shelf extending out from Antigua some 16 miles and taking this route will be an advantage for less foul current, then work down the west coast of Antigua along the edge of the reef until the finish.