Last night, the leading yachts in the RORC Caribbean 600 were approaching Guadeloupe, rising to 1,467 m (4,813 ft) above sea-level, the island produces the most significant wind shadow on the 600-mile racecourse.

The 214ft Baltic ketch Hetairos was the first yacht to Guadeloupe at sunset, powering through the crystal blue waters at 18 knots. George David's RP90 Rambler were just over a mile behind; the crew fully hiked with the big gear up, blast reaching after their monumental competitor. With no moon and substantial cloud cover, the two yachts were sparring for line honours in the pitch-black dark of night as they passed the Soufrière volcano. At first Rambler followed the leaders line but after passing Les Saintes, Hetairos tacked offshore and Rambler did not follow. The defining moment came as Rambler lost speed at La Desirade. Hetairos escaped into the open air of the Atlantic and gained 16 miles on Rambler, a lead that Hetairos is unlikely to give up. Rambler and Hetairos are expected to finish the race early this afternoon.

Handicap race leader and third on the water, Niklas Zennström's JV72 Rán made it through the wind shadow of Guadeloupe with some precision last night. The wind in this region is subject to massive changes in direction and Team Rán went through a myriad of moves and sail changes.

By midnight, Peter Harrison's 115ft ketch Sojana and Gerhard Andlinger's 124ft Perini Navi P2 arrived at Guadeloupe and came close to a complete standstill for over two hours, however P2 managed to keep going and pass Sojana: "P2 did well to read the conditions," conceded Sojana crewman, John Burnie by satellite phone. "They stayed just a little further offshore but made a big gain by remaining offshore, which is traditionally not the best route. We have some catching up to do but the long reach to Barbuda should suit Sojana more than P2 and we expect to overtake her once again."

Last night, Olivier Vigoureux's 63ft trimaran, Paradox may well have claimed a speed record for the RORC Caribbean 600. Screaming past Montserrat like a bat out of hell, the French trimaran took on a ballistic surge for half an hour, hitting close to 30 knots of boat speed.

Sad news for two yachts came to light this morning, Christof Petter's Austrian Class40, Vaquita failed to start correctly and as a result the provisional leader of the Class40 division is Christopher Coatnoan's Partouche, which is also the only Class40 racing Two-Handed.

The Class40s are taxiing for take off at the top of the course for the long reach down to Guadeloupe. These pocket rockets are capable of speeds well in excess of 20 knots and the 150-mile leg to the south will give them ideal conditions to let loose. Ron O'Hanley's Cookson 50, Privateer also failed to start correctly which is gutting for the American team on Privateer as they have sailed a great race so far.

Amanda Hartley's Swan 56, Clem has regained the lead on time correction in IRC One with Colin Buffin's Swan 62, Uxorious IV lying second. Both Swans are now on a tight reach south. Jaime Torres' First 40f, Smile and Wave should come into contention; the Puerto Rican First 40 is set to round Tintamarre later this morning.

IRC Two has Ross Applebey's Scarlet Logic leading after time correction, however Christian Reynolds' Swan 51 Northern Child is second, having made a marvelous recovery after turning back at the start and giving up over half an hour to the opposition.

Northern Child is chartered to Merkle, the American IT company, and has five employees on board with all expenses paid for by Merkle after one crew member chose the RORC Caribbean 600 as their dream vacation for winning an employee prize. Third after time correction in IRC Two is the smallest yacht in the race, Bernie Evan-Wong's Mumm 36, High Tension. Bernie and his team are currently enjoying the long reach down to Guadeloupe. 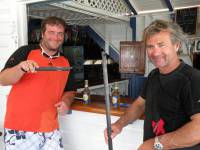 Just after 2200 last night, Alain Delhumeau's 50ft trimaran, Rayon Vert reported in with steering problems and retired safely into Falmouth Harbour. A carbon fibre steering rod gave up in dramatic fashion near Redonda. Taking just four hours to sail 80 miles from St.Barths to Redonda, the multihull was virtually airborne exceeding 25 knots of boat speed. Alain and his crew were understandably disappointed but vowed to return next year.