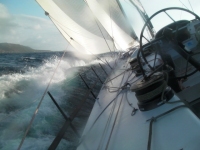 Karl Kwok's Beau Geste lead the mono-hulls around the Iles des Saintes on the SW tip of Guadeloupe and is now reaching at 20 knots across the bottom of Guadeloupe on their way to La Desirade before turning North to head back to Antigua. Close on their heels was Danilo Salsi's DSK Pioneer Investments but her speed has slowed considerably this morning, allowing Beau Geste to get away and James Grundy's Bella Pita to catch up. Richard Oland's Vela Veloce with Volvo Ocean Race winner Stu Bannatyne on board is also close to turning the all-important corner at Les Saints and is closing in on DSK and Bella Pita. The next 8 hours are going to be nerve wracking for the fleet as the wind is forecast to lighten and shift to the South West.

The two Cookson 50s, Lee Overlay Partners and Privateer were also close to the turning point at Les Saintes.

"We are close to turning the corner at Guadeloupe," reported Adrian Lee from the boat. "We are on the wind and to be honest, nobody expected the breeze to turn south. However, all is good with Lee Overlay Partners, we even had a sip of champagne last night to celebrate a birthday on board. At the moment, we can see AAG Big One and also Privateer and we hope to catch them up. Lee Overlay Partners should average 10 knots after we come off the breeze and our ETA is lunchtime tomorrow."

There are five boats from IRC One in the top ten on corrected time. Global Yacht Racing's First 47.7, Caspian Services EH01, Marc Glimcher's J 122, Catapult and RORC member Peter Hopps' First 40.7, Coyote. These boats in particular will be keeping their fingers crossed that the breeze lasts to avoid the pendulum swinging towards the bigger boats in the RORC Caribbean 600.

You can track the yachts and read the messages that are coming in by accessing the Tracker Page or the Boat Blogs page on the official RORC Caribbean 600 web site.