As the race start draws near, indications are that this could be an incredibly fast race; predicted wind speeds are in the region of 25 knots and Jonathan Cornelius of Antigua and Barbuda Search and Rescue (ABSAR) has reported that the sea state around Shirley Heights, is running at up to a three metre swell.

Close to thirty yachts from nine different countries have gathered in Antigua, for the first ever race, to circumnavigate the Caribbean. The race entries show a rich diversity of sailing boats; the smallest and probably most unusual, is Yanick Rebuffat's Giro 34, Claire de Vents, an Italian built, water ballast downwind reaching machine, not dissimilar from a giant mini-transat. "We are sailing two-handed for this race and we hope to have a good battle with our friends on board the Class 40, Lou, which is also from Guadeloupe. When we heard about the race we decided to do it, almost immediately, it is a great opportunity, there is no other race like it in the Caribbean"  commented Yanick. The largest yacht in the race is Mike Slade's record breaking, 100ft Farr designed, ICAP Leopard. 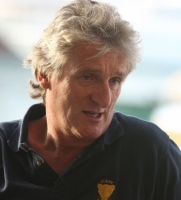 "This is the best race track in the world" said Mike Slade after the Skipper's briefing. "We are here because we know that the RORC will deliver a professionally run event and it will be under IRC. As far as I am concerned, the timing of this race fits perfectly into the racing calendar, I have been coming to Antigua for years and to my mind, this race ticks all the boxes."

Follow the RORC Caribbean 600 as the race unfolds; RORC/OC Trackers are fitted to all of the boats, the race viewer on the RORC web site will be updated every 30 minutes showing a full spectrum of data from the boats and the prevailing conditions.