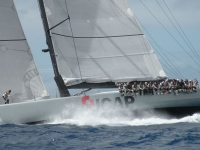 Adrian Lee's Cookson 50, Lee Overlay Partners, is having a cracking race, pushing the boat hard and in with a shout of winning their class after time correction.

"It was a long, long night; twelve hours of darkness and right now, it is very wet on deck but everyone is happy, as its warm water, a little different to Dublin Bay!" commented Adrian Lee from the top of St.Martin.

"It is very rough, unbelievably wet and we were glad to see dawn to bring on the sunshine." text John Burnie, from the trampolines of the giant 60ft Trimaran, Region Gaudeloupe. 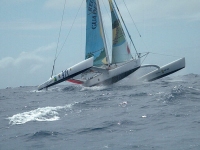 They have averaged 15.5 knots along the rhumb line with a top speed of over 26 knots in ocean swell!

Region Gaudeloupe have led the fleet from the first mark of the course.

In Class Super Zero Danilo Salsi's Swan 90, DSK Pioneer leads the class on the water but Anders Johnson's Swan 70, Blue Pearl is just 23 miles behind and in touch on handicap. DSK has a highly experienced Italian crew and the boat is racing for the first time, the principle helmsman is Andrea Casale, a highly accomplished Melges 32 and TP52 sailor and the current world J/24 Champion, there is a video interview with Andrea in the boat blog section of the RORC web site.

In Class Zero, Peter Hopps' GY51, Nisida, is in pole position. The boat races all over the world and won class in last year's Rolex Middle Sea Race. David Aisher's Rogers 46, Yeoman XXXII, has had a set back after their terrific start.

"During the night we got hit by a squall, blowing out the A3 spinnaker." commented David Aisher. "We were without a spinnaker for three hours but have now rounded the top of St. Martin and are screaming along at twenty knots plus on our way to Guadeloupe."

The one and only retirement so far is in Class Zero is Edward Krubasik's First 47.7, Gilly B who pulled into St. Eustacia over night, they have a broken gooseneck but all are well on board, if a little disappointed.

Behind them, Tony Lawson's, Class 40, Concise, are having a tremendous battle with a sistership, Alex Mehran's Cutlass. Concise led from the start but are now neck and neck with Cutlass. "I was very pleased with the start." commented Concise's owner, Tony Lawson. "The lads were handling the boat well but Cutlass has a big masthead shute and will have an advantage in reaching conditions, it will be nip and tuck all the way to the finish."

In IRC Class One, Bernie Evan-Wongs, Mumm 36, Café Americano High Tension is showing great form and considerable local knowledge, leading the class on the water. Bernie is a veteran of twenty Antigua Race weeks and his crew have some top sailors on board from Guadeloupe.

It is early in the race to predict finishing positions but Yeoman XXXII look to be a boat to beat. There are a bevy of Swans competing in the RORC Caribbean 600 and there are some great private battles going on; Adam Cleary's Swan 62, Gienah is having a close race with her Guadeloupe sister ship, Daniel Segalowicz's, Schider and the two have been locked together since the start. Also Francois Hellot's Swan 56, Albireo, is having a great tussle with Olivier Moreau's racing Swan 56, Deneb, the heavy displacement yachts are revelling in the Caribbean conditions and will be enjoying the company of near identical competition.

The first boats are expected to arrive back in Antigua before dawn on on Wednesday and no doubt the reception party at the Antigua Yacht Club for the first RORC Caribbean 600 will begin and the party may well last until Friday.